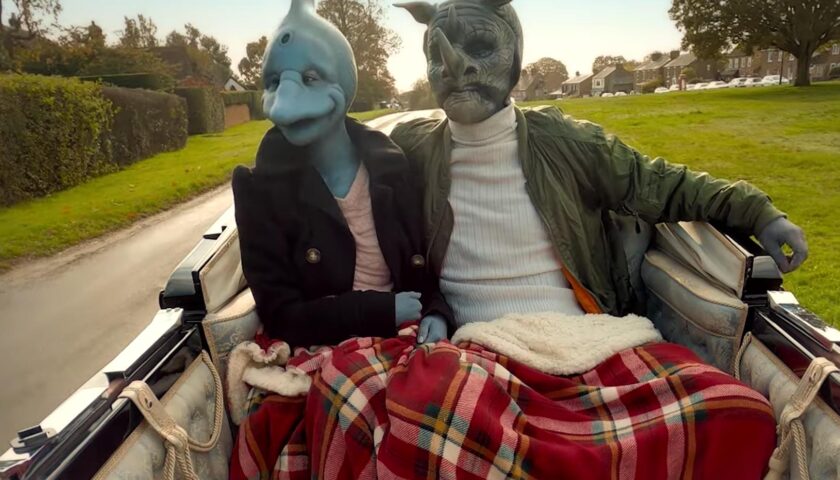 sometimes I think it makes sense as a covert government anti-Covid strategy (now that they’ve given up on overt, data-driven, scientifically sanctioned ones): give the public a new dating show in which people are done up as figures from a plushy fetishist’s (look it up, I don’t have time to explain everything) malarial dream. This will keep them spellbound with delight, or weeping silently into the sofa at the thought that the western civilisation we once hoped for is over. But, either way indoors, alone, spreading nary an airborne droplet to the young and vulnerable.

I believe it to be a multi-pronged public health strategy. First they softened us up with last week’s Apocalypse Wow on ITV2, which left the nation staring bleakly past its television screens into an unknowable future that seemed suddenly not to brim with overwhelming possibility for humanity and its endeavours. Now there is Netflix’s Sexy Beasts, a reworking of a BBC show from 2014 with no other possible justification. What comes next, I cannot imagine. After a nugatory attempt, the mind quails and halts, unwilling to go further. Thus, do I fight to explain the advent of this monstrosity into our lives.

To elaborate further on the basic, if hallucinatory, setup now that you are prepared: men and women (and it is always men and women) are fully disguised in animal/dinosaur/dolphin/insect/other prosthetics and put together in bundles of four. One man gets three women from whom he must choose his soulmate/the least soul-sapping entity, or one woman gets three men from whom she must choose likewise. But without seeing what they truly look like beneath the layers of latex, antennae, fur, horns, wigs etc. They have to go by personality and “connection” alone. They are all tired, you see, of meaningless relationships with people they fancy. They want the kind of true love that only overcoming a marked distaste for an “uggo” can provide.

Not really. They want to provide us with between 23 and 27minutes worth of entertainment, from which all potential jeopardy, embarrassment or glimmers of truth and delight have been expunged by making half the contestants literal models, the other half as hot as models then making them all up so as to obscure neither their uniformly hot bodies nor the essential hotness of their faces. In a way, it’s soothing. I do not actually want to see a Quasimodo or Quasimodess humiliated at every reveal. But it’s also very … boring.

Once your admiration for the people whose desperation to find another twist on the blind-date formula, and wrest another few drops out of the attention rag wrung bone-dry by the likes of Married at First Sight and Love Is Blind, has worn off, Sexy Beasts is tremendously dull. The couples have a restaurant date each. One is eliminated, though the eliminator always peppily wishes he/she could choose all three. The remainder go on a second date – chosen to furnish a joke-adjacent line or single entendre for the voiceover (ice-sculpting a heart, perhaps, so that one can break it, or clay pigeon shooting – to see if this date hits the target, you see?) then choose their successful Sexy Beast and meet “au facially naturel” so they can see how they did.

There are a few moments that briefly bring you out of the warm fug of semi-consciousness in which the series is likely to be enjoyed. One is the reaction of Adam from Birmingham as he is gently let go by sweet, 6ft model/demon Emma after the first round. “We can still go to that pub, though,” she says, reminding them of a chat they had on their date. “Yeah,” snarls Adam straight back. “Maybe not.” He rises to leave. “Your loss,” he says as his parting shot. This is a tricky one to pull off even if you are not addressing it to a sweet, 6ft model called Emma, while dressed as a white mouse with a mullet. Adam does not succeed. As Adam is an avatar for a very specifically awful, known and common type of man, this is deeply satisfying.

More happily, there is party-planning, husband-hunting panda Kariselle, who somehow sounds like Kathy Griffin, but who makes Kathy Griffin seem like she’s on Mogadon, so great is Kariselle’s energy and devotion to the cause of holy matrimony. She picks her beast (Tyler, a profoundly sanguine model and security guard) and yells: “Somebody get ordained!” I think they will be very happy together, even after Tyler works out what just happened.