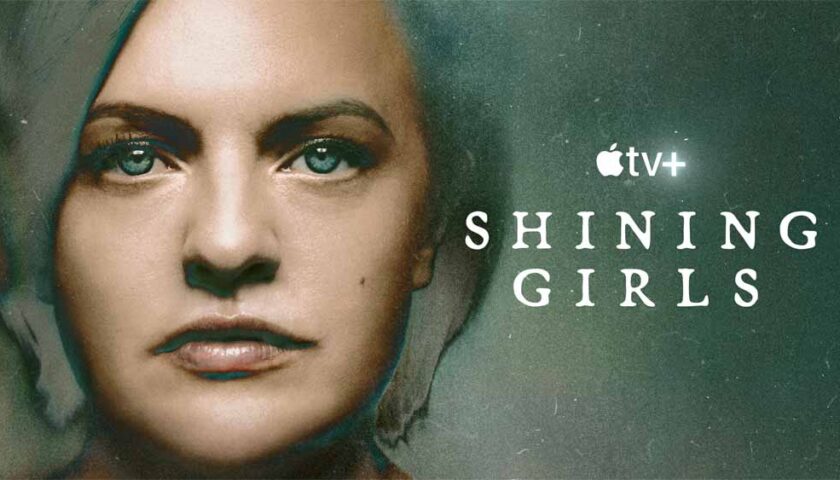 Is there anything Elisabeth Moss can’t do? If you’re sitting through eight episodes of Shining Girls, a time-traveling crime series about a violent serial killer terrorizing young women, the answer is clear: it’s Elisabeth Moss’s world and we’re just living in it. The actor, stars, executive produces, and directs episodes of the Apple TV+ series — adapted from Lauren Beukes’ 2013 bestselling novel — with a sobering intensity delivering in effect, a performance so calculated in its emotional fragility that it rankles. (The remaining directorial duties are divided between Michelle MacLaren and Daina Reid.)

Created by Silka Luisa, the TV adaptation admirably deviates from the source material. If the book laid bare the devastation of violence from the perspective of a deranged killer, then the show trains its gaze on using time as a device to expand on how one man’s violent tendencies imprint on the realities of women across generations. Sure, that complicates the storyline but then again, is Moss ever not up for a challenge? The result is a show that is bold enough to eschew convention and still remain compelling enough to be punishing

When we first meet Kirby Mazrachi (Moss), it’s 1992 — she’s a meek research assistant at Chicago Sun-Times who keeps forgetting her own identity. Realities keep shifting for Kirby: at one point, we see her share an apartment with her punk-rocker mom (Amy Brenneman) and a cat. And then another day, she comes home to a husband (Chris Chalk) she remembers only as a colleague. Her home is now on a different floor of the same building and she turns out to be the owner of a dog. By then, it’s evident that Kirby, like her memory, is unreliable but Shining Girls doesn’t immediately explain the twist, choosing to disorient viewers by putting them in Kirby’s head so as to feel the full force of her fractured consciousness.

Then, the pieces start falling together: six years earlier, Kirby — on her way to become a star reporter — was brutally assaulted by a vicious assailant who left her for dead and was never caught. The attack turned Kirby into an open wound — soon after she regained consciousness, Kirby began experiencing unexplainable shifts in her reality. It starts off little — a slight difference in haircut or the realisation that her desk at work was never really hers — before escalating into full-blown hysteria like having to remember a life with a husband she doesn’t recognise. The changes in the pieces of her life leave Kirby with no other option but to keep a journal to note down the facts about her existence. But it barely helps. As her realities keep shifting, Kirby withdraws into herself, perennially feeling misled and confused. After all, it’s not only her memory that betrays her; it’s also her mind.

But when a murder takes place that matches Kirby’s assault — the perpetrator leaves objects in the bodies of his young victims — she is forced to confront her trauma head on. She teams up with strung-out reporter Dan Velazque (a magnetic Wagner Moura) to hunt for the attacker before he finds his next kill. As Kirby and Dan uncover connections between victims when bodies start stacking up, the killings seem more and more impossible. For one, the timeline can’t possibly make sense: when the duo investigate the murder of a woman in 1972, they discover a locker key from 1992 in her possession. Could they potentially be on the hunt for a serial killer who remains untraceable because of his superheroic abilities to shift between timelines?

The proceedings of Shining Girls are never in a hurry to dispense that answer even when they remain generous with clues. The first four episodes of the series for instance, make for assured storytelling: the show moves slowly, never quite sacrificing the severity of its themes or abruptly escalating it in favour of melodramatic high points. Even though the suspense builds only at midpoint, the first four episodes build the mystery of Kirby’s mutating world with a terrifying restraint that shows more than it tells. The makers wield visual flair as a constant weapon, eschewing explanations and gruesome depictions of violence.

As a show that’s effectively a dead girl mystery, Shining Girls admirably manages to sidetraps the cliches that abound the genre.

This is not the kind of show that plots its journey between damage and catharsis, making it that much more ingenious. By using oppressive pasts as a foundation to leap into the traumas of the present, Shining Girls tackles bold ideas: the hold that aggressors continue to hold on their victims long after their acts of violence have been committed and the distance between trauma and renewal. The narrative leaps of the show are matched by the technical specificity: the 90s period setting is attentively recreated and the magnetic direction work effectively demonstrates the unsteadiness that define Kirby’s existence. Even the construction is attentive: the decision to show the killer’s perspective well before Dan and Kirby realise the method to his madness, nicely contrasts with the inherent minimalism of the proceedings. The teases are as rewarding.

Still, the show’s complexity would feel gimmicky if it wasn’t held together by the strength of its lead performance. Even though Moss technically plays one role, she delivers what is effectively a collection of performances, all calibrated with single-minded precision. As Kirby, Moss occupies two different spectrums — her turn acknowledges Kirby’s shakiness but also underlines her search for some stability. The actor is both furious and fragile, relaying Kirby’s dilemma so convincingly that it ends up becoming chilling. Rarely can an actor convey so much anguish by doing so little. But then again, Moss isn’t just any actor. To a large extent, that’s precisely the point of Shining Girls: rarely can actors shine as bright as Elisabeth Moss.