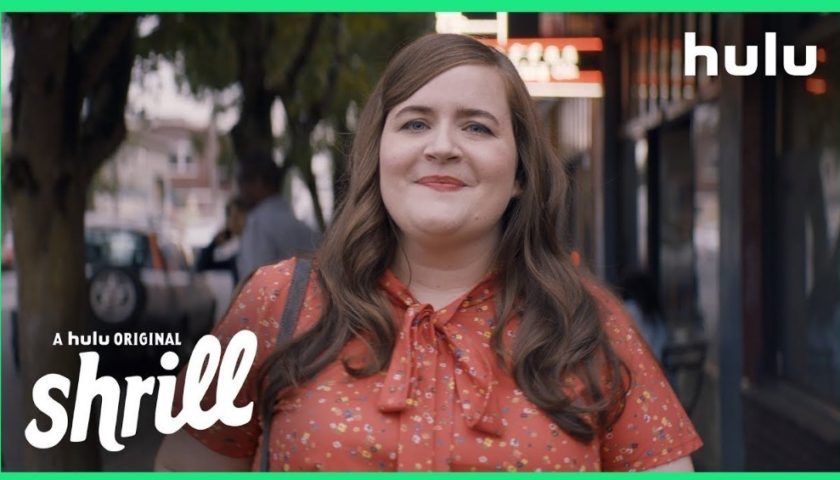 Review: A week after “Captain Marvel” lit up the box office, fighting off superhero fatigue and online trolls who feel a female superhero isn’t “realistic,” since apparently only men can shoot fire from their hands, there’s another project that is looking to break barriers. On Friday, streaming service Hulu drops all six episodes of “Shrill,” a dramedy starring Aidy Bryant as Annie, a female journalist who is — and the series doesn’t mince words — fat.

When advertising for “Shrill” first began popping up a few weeks ago featuring Bryant clad in a maroon bathing suit, the reaction was immediate. Many women, myself included, took to social media to talk about how they never expected to see someone “who looks like me” plastered on 14-foot-tall billboards around Los Angeles. (Also, I really want that suit!) There was the inevitable negativity that comes with, well, anything on the internet, but overall the response seemed to indicate we’ve come a long way since Marie Claire ran its infamous “Should ‘Fatties’ Get a Room? (Even on TV?)” piece. (That article was written in 2010 in response to the first season of CBS’ “Mike and Molly,” in which apparently writer Maura Kelly was forced, “Clockwork Orange”-style, to watch Melissa McCarthy and Billy Gardell kiss. It is no longer available to view on Marie Claire’s website.)

Mixed in with all the excitement of a series revolving around a plus-size lead was some caution. Us fat girls have been burned before, often with well-intentioned but clumsy storylines that don’t ring true. It’s not an easy situation: we want to see our issues addressed, but we don’t always want it to be just about the weight. Would “Shrill” be able to walk that fine line of dealing with the indignities of being fat, while also telling stories that everyone can relate to?

I had reason to hope. “Shrill” is based on Lindy West’s 2016 memoir, “Shrill: Notes From a Loud Woman,” in which the writer is unapologetic and proud, always ready with an insightful and funny response, even when dealing with daily rape and death threats. (While the TV character is called Annie, many of the storylines spring from events West has written about extensively, including her battles with internet trolls.) It was also encouraging that they cast Bryant, a charismatic, talented performer, rather than putting an actress in a fat suit or asking one to gain weight — always disconcerting as the talking point becomes about how amazing the physical transformation is and how they inevitably shed the weight after filming. (See? Anyone can do it!) West and Bryant are also writers and producers on the series, and co-wrote the pilot with showrunner Ali Rushfield. Also among its producers are Lorne Michaels, Brownstone Productions’ Elizabeth Banks, and Max Handelman, responsible for the girl power “Pitch Perfect” franchise and the upcoming “Charlie’s Angels” reboot.

So I watched the first episode with cautious optimism. To be honest, it was jarring for several reasons. One was that it uses the other F-word without reservation, not relying on adjectives like “zaftig” or “curvy.” Not as an insult, just as a statement of fact. It doesn’t shy away from things fat people have heard all their lives: that they’re lazy, that people who criticize are just worried about their health, that their weight is a choice.

Then there were the personal parallels: Annie lives in Portland, Ore., is a journalist, has a father dying of cancer, is chasing a pseudo-boyfriend who is more clueless than cruel, and deals daily with the indignities of being a big girl in a world where weight often feels like an acceptable form of discrimination. There were far too many notes that hit close to the bone for this Oregon writer who just lost her father to cancer, some as specific as when Annie is told she’s funny and reminds people of Rosie O’Donnell — I once heard this after performing a gut-wrenching monologue that was not remotely intended to be humorous, although my performance might have had something to do with that.

The first episode is also upsetting because Annie has yet to grow into Lindy — the confident, unapologetic writer I fell in love with in her columns and the book version of “Shrill.” As Variety’s Caroline Framke pointed out in her review, “The early going of the series can be tough to watch as people stomp on Annie over and over again…” She’s demeaned in the office, in bed, and even in her local coffee shop. And while every moment rings true, and is often very funny, it’s uncomfortable to see. She is still apologizing, still believing, as she says at one point, “Maybe if I was just sweet enough, and nice enough, and easy-going enough, with any guy, that that would be enough for someone.”

Then something happens. “Shrill” might be the first mainstream entertainment in which a heroine finds empowerment after what (spoiler alert) some will find a controversial decision: Annie has an abortion. By the end of the first episode, we’re starting to see an Annie who stands up for herself, who is embracing the part of her that her boss Gabe (a wonderfully smarmy John Cameron Mitchell) calls a “total bitch” — which we know translates to a woman who values her own worth. That’s when I realized that in many ways, “Shrill” is a superhero origin story of its own.

Each of the six episodes only gets better and better as the characters are more developed (the supporting cast is stellar and even the slacker boyfriend Ryan, played by Luka Jones, is surprisingly layered) and the stories take on more of a collective feel. In press, both Bryant and West have said they don’t want the show to be just about Annie’s weight. Even if you haven’t struggled with body image, who can’t relate to feeling unappreciated at work or misunderstood by your parents? And the relationship struggles will probably speak to everyone regardless of gender, age, or size; as Rushfield said in a recent Q&A about the writing process: “Every single person in the room had a Ryan that they talked about.”

Best of all, Annie is no saint. She’s shown as a smart, funny, sexual woman who often makes mistakes and bad or selfish choices. Just like the best TV characters do.

In short, Bryant and company have achieved the best kind of art; a specific story that manages to feel universal.