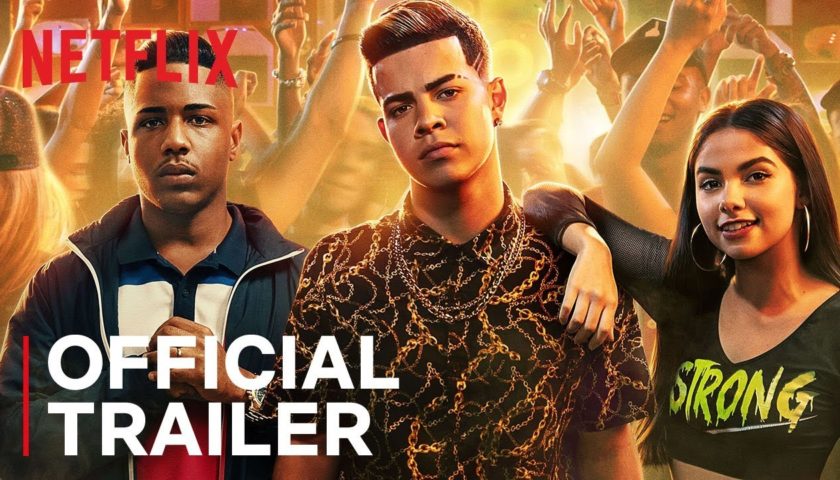 Opening Shot: A group of kids are dancing at a block party in São Paulo, and a voiceover says, “We can only dream with our eyes closed. We don’t have time to waste, bro. In just one second, your whole life can change.”

Doni (MC JottaPê) is gaining momentum creating funk music and putting it online. While he’s hanging out at his friend’s house, he puts his newest song online and it “blows up”, to the point where a prominent funk label wants to talk to him at the block party the next day. He’s considered the “richest kid in the ‘hood,” as his hairstylist buddies describe it; he lives in the favelas of São Paulo, but his family owns a bodega and they live in a nice, well-appointed house. Doni’s father has dreams that his son will take over the business, and thinks this DJ stuff is nonsense, but Doni is sure he’s onto something, especially after he gets that call from the record label.

Nando (Christian Malheiros) is generally a good guy, but in the favelas, any way you can make money is legit. So he works for a drug operation, supervising the “manufacturing” end (cutting and bagging, basically). He wants more responsibility, mainly because he’s got a family to think about, but the other guy who supervises the operation thinks he’s reaching too far, too fast. When their boss asks them to eliminate someone, though, Nando volunteers, thinking he’s ready. When he actually does the deed, though, he realizes he’s so not ready, but he might not have a choice anymore.

Nando’s sister Rita (Bruna Mascarenhas) lives on her own; she makes her money hustling things like cell phone lenses and hair spray on the street, and does some light weed dealing on the side. She recruits her neighbor and friend Cacau (Danielle Olímpia) to help her hustle, despite Cacau getting warnings from her mother to stay away from Rita. As they’re hustling, they get spotted by the cops. Rita gets away, but Cacau does not. And when Cacau’s mother starts to panic, Rita realizes that Cacau was carrying the bag with Rita’s weed in it. Rita bolts and goes to stay with Dani.

Neither of these issues keep Nando and Rita from coming to the block party and supporting Dani. He needs that support when he hears his new song being sung by a local star; he’s pissed that his song was stolen. But the three of them have more to worry about when Rita comes back to retrieve a picture of her mother and is confronted by Cacau and her mom. Her mom beats the snot out of Rita, and even Nando’s threats won’t stop her.O Sintonia is created by KondZilla, a filmmaker and DJ who is best known as one of the forerunners of the funk ostentação style of music. Funk is a major part of the series, and the themes of funk ostentação are mirrored in the lives of Nando, Rita and Doni: Cars, big houses, and a desire to leave the favelas for a better life. All three of them are trying to do just that, just in different ways. But they’re always there to support each other.

What KondZilla and his co-creators, Guilherme Moraes Quintella and Felipe Braga, are trying to show how vibrant the culture in the favelas are. You have to realize that these are shantytowns that have been built by squatters on the outskirts of Brazil’s cities over the last 100 years or so. Most of them now have electricity, running water and most modern conveniences, but they’re still areas of high poverty where organized crime thrives. But there’s a huge sense of pride among the people who live and grew up there, as the music, food and art coming from the favelas are some of the best things about the cities they’re in.

By showing that these three childhood friends stay loyal to each other, even as their lives diverge, shows how strong the bonds in the favelas are. We’re intrigued to see where the lives of these three people go, and how their bonds will be tested.