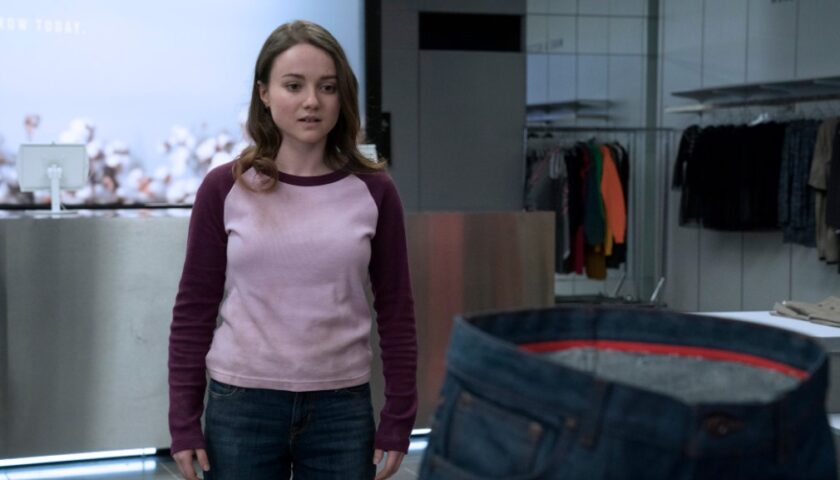 The virtual experience of the Fantasia Film Festival is not the same as attending the Montreal gathering in person, but its programming has the same effect—in the same night you can choose between a movie about killer jeans or a documentary about Tiny Tim, both having their world premiere. In its first year of being strictly online, Fantasia still maintains its flair for being more than just a genre festival that attracts horror, sci-fi, and art-house hounds, but a collection of the best kind of oddities from around the world. For my first dispatch from the festival’s virtual experience, I checked out four movies that had their world premiere by way of Fantasia, a seal of approval that means a great deal, even if the audience members are safely cheering Nongshim ramen ads and meowing like cats (it’s a thing) from the isolation of their living spaces.

I started my virtual experience with “Slaxx,” a playful horror-comedy with a message from director Elza Kephart. “Slaxx” hits that Fantasia sweet spot, being that it’s a Midnight movie fully committed to its premise, in this case a pair of killer jeans. The action takes place over one night at a store called Canadian Cotton Clothiers, a chic retail store with nonsense slogans like “BE-LIEVE” and “Make a better tomorrow today,” and one that hawks homogenous clothes that have little style. As a new pair of jeans become murderous at a store the night before their big release, “Slaxx” says many of the things you’d expect from a story that seeks to call out the soulless nature of such an enterprise, and the deadly hold it has on the people who are forced to make the clothes, and those who feel they must wear them them. But the carnage is a lot of fun.

The most inspired part of course, is the jeans. The jeans start attacking the employees in tactful and gruesome ways, and with credit to the original script by Patricia Gomez Zlatar and Kephart, it’s fairly clever with how the jeans becomes a slasher of sorts. The first kill is great, showing a nightmarish scenario for pants that are marketed as “form-fitting,” making for a big wink and the kind of pool of blood that Fantasia audiences adore. The jean kills become the script’s most surprising element, as the rest of it seems built from easily traceable characters, like how Libby (Romane Denis) is our innocent surrogate into an experience that has her her seeing the ugliness within a business she’s originally thrilled to sign up for. Libby finds support in Shruti (Sehar Bhojani), the least brain-washed employee of the bunch, and a scene-stealer with her disillusion against CCC.

“Slaxx” alternates between having a clear message and also having ridiculous gory fun, and while it struggles to blend the two tones, both notes of real-life atrocities and silly comedy stand out in their own right. Sometimes “Slaxx” is a little too corny with its easy comedy target of selfish corporate actions (such as the manager who is so villainous he’ll start to hide the jean casualties from other employees); the same can be said with the heavy-handed message it’s trying to make about the hypocrisy of a company that values product more than people, as inspired as it may be. But “Slaxx” doesn’t lose sight of the playfulness that makes “Slaxx” an easy sell, and I suspect Shudder subscribers (who will be able to catch up with “Slaxx” soon) will take to it.

One of the best things about Fantasia is that you can always count on finding an excellent documentary—last year it was “Phantom of Winnipeg,” and this year it’s “Tiny Tim: King for a Day.” The documentary is lovingly and efficiently put together by director John von Sydow, who covers the life story of the high-voiced, ukulele-strumming, “Tiptoe Through the Tulips” entertainer within a 75-minute run-time, while giving careful attention to each of the saga’s different shades of black. As the film’s recollects Tiny Tim’s ascent to pop culture stardom and immediate fall, von Sydow’s documentary becomes all the more heartbreaking and unforgettable.

The footage included of Tiny Tim performing speaks to the scope of his career, one that largely lived in pursuit of applause—in the beginning it’s footage of this late ’60s zeitgeist, captured by D.A. Pennebaker, Jonas Mekas, and Andy Warhol, mixed in with clips of Tiny Tim hanging out with one of his greatest admirers, Bob Dylan. And of course, there are clips from “The Tonight Show,” where Tiny Tim famously married Miss Vicki, one of the most-watched TV events of all time. Later on, it’s raggedy VHS footage from the ’80s of a long-dismissed Tiny Tim crouched over a microphone in a school gymnasium, a Pagliacci during recess. There is a great deal of poetry to how Tiny Tim struggled to live an entire life under the warmth of a dimmed spotlight, and von Sydow’s documentary expresses it with incredible focus and tenderness.

Perhaps the documentary’s greatest master stroke is having “Weird Al” Yankovic (known as “The Bard” in my family) provide Tiny Tim’s interior monologue, reading the diary entries and letters that Tim wrote either to Jesus Christ, lovers like Miss Vicki, or the loneliest parts of his soul. Emphasizing the documentary’s vital sense of gravity as it talks about a long misunderstood artist, Yankovic reads the words with solemnity as if they were passages from the Bible, for all of the dark, depressing, and sometimes scandalous things they contain. Using the voice of one of Tiny Tim’s greatest descendants only adds more to the story’s awareness to the complexity of the entertainer; the documentary creates a deep interaction between these two artists without drawing attention to it.

That very complexity comes through especially in how the documentary includes the more problematic sides of Tiny Tim’s life, especially his relationship with women. Some women have pleasant things to say about him, but not everyone is so flattering, as with his ex-wife Miss Vicki, or their daughter Tulip. The documentary’s attention to this ugliness is all the more effective. At times, “King for a Day” is bleak, and so are the things said about him, and yet that makes you empathize with him more. There was so much more to Tiny Tim than his warbling falsetto and ukulele, and the doc honors him by presenting him with compelling honestly.

There is an admirable ambition to Cody Calahan’s “The Oak Room,” which had its world premiere on Monday night. In a classical sense that I imagine some will take to immediately, it’s driven purely by dialogue, calculated beats, and the not-so-tall tales told from someone standing on one side of the bar to another. It’s a project that’s all about storytelling, so much that it sharpens your ears even more to the naturalism, or sometimes lack thereof, when it comes to the hard-boiled exchanges between Steve (RJ Mitte) and a cranky bartender named Paul (Pete Outerbridge). Paul is furious at Steve for how the misfit abandoned his own father Gord, leaving Paul to take care of him after Gord died. Paul has Gord’s ashes in a tacklebox to prove it. On top of that, someone is coming to Paul’s bar in an hour to what we assume will be a hit on Steve. In exchange for all that he owes, Steve offers Paul the compensation of a story, which Paul acts incredulous about, but listens anyway. If you do the same, the original script by Peter Genoway is a trip in its own right.

This is a tale about fate and chance, starting with the relentless winter storm that brings together Steve and Paul, and then influences the story that Steve tells Paul about a wealthy man (Martin Roach) who stumbles into a bar and chats with a shady bartender (Ari Millen). No one enters into their respective situation without secrets; Paul even tells Steve a story that Gord told Paul, before Gord died, about possibly going to hell. We see all of these stories played out in their individual realities with these different actors, and yet the framing device is front-and-center.

“The Oak Room” aims high in trying to getting viewers to settle in and not see actors but a simple conversation, and the dialogue is spiked a little too often with overheated confrontations or clumsy exposition to appear entirely natural. But once you do settle in—as with its effective, twisty, and mostly successful third act—you can feel more of what “The Oak Room” is so committed to, across different, more than decent lived-in performances. And it’s a testament to the craftiness of Genoway’s script that for all of the details laid out, for all of its wordiness and theatricality, these elements are mindful misdirections. It’s the facts that aren’t discussed, the names that aren’t revealed, that give the story its haunting quality.

Monday afternoon featured the world premiere of writer/director/cinematographer Orson Oblowitz’s “The Five Rules of Success,” a character study that takes after early Nicolas Winding Refn movies, both in sense of its gritty fever dreams and striking cinematography, but also in the sense that the storytelling isn’t all there yet. Instead it focuses on swinging for the fences, like with a big hit-and-miss performance from an alternately stoic and ferocious Santiago Segura, playing a man known as X. At the beginning, he leaves prison, in one extensive camera shot, on the basis of good behavior. In an empty apartment with no support group, X is trying to build himself from scratch. But as his pushy and eventually inappropriate parole officer (Isidora Goreshter) soon tells him, he’s “A prisoner on vacation.” The movie’s title comes from the guidelines X gives himself, which play out in sequences where things start to fall apart. Segura’s character tries to stay on the straight path with a restaurant job, despite having bad influence from his boss’ privileged son Danny (Jonathan Howard) who leans X back into a life of crime, even though the crime that put X in jail had nothing to do with drugs or money; true to the desired grandiosity of Oblowitz’s movie, it was far more gruesome and Shakespearean than that.

“The Five Rules of Success” is incredibly concerned with making sure that you get the points its trying to make, especially as it involves important themes about chances of recidivism in a country that sets some people up for failure more than others. The filmmaking is in-your-face with strobe light-like editing and evocative lighting, but loses its effectiveness because there’s barely any subtlety to balance it out, and as the story goes along it cuts at the tethers that keep it grounded, or believable. This is the kind of movie that caps off a shocking kill with someone saying “This is America,” or has yet another freak-out in which a character takes out their anger on the stuff in their living space. Eventually the movie becomes hard to accept as either literal or ephemeral; it’s plainly overzealous. To Oblowitz’s credit, he leans into all of this until the very end, when X devises a big plan that is more forced than it is believable, even if some people (in the movie) adore it as an art piece. Whatever parts of this movie are of an actual nightmare experienced by underestimated people just like X, Oblowitz’s own impulses seem to get in the way.