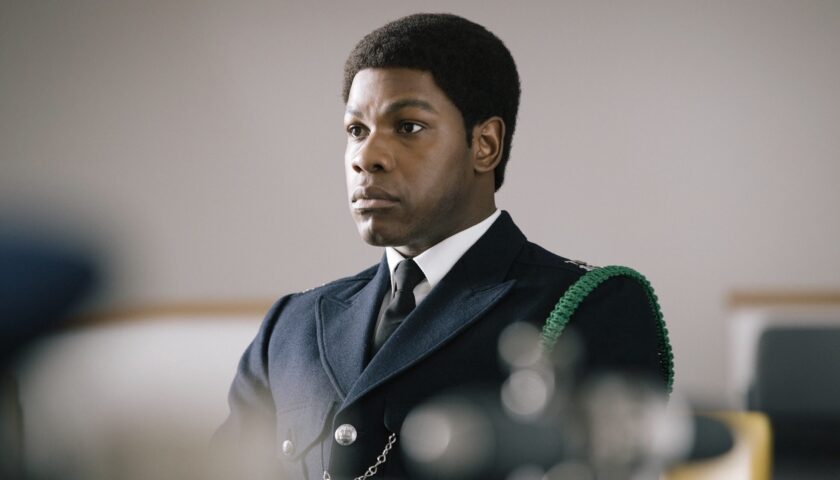 The third of five chapters of Steve McQueen’s “Small Axe” miniseries to screen at the New York Film Festival is once again set in the recent past and once again feels like it’s talking about today and tomorrow. “Red, White and Blue” stars John Boyega as an idealistic Londoner in the early 1980s who thinks he can improve the police department from within, only to learn the hard way that reform is no easy task.

Citizens of the United States and elsewhere are currently grappling with the idea of reforming the police versus the idea of abolition. The latter notion suggests that the structures and policies of modern policing have grown so rotten from within — due to white supremacy and unequal justice based on race and class — that starting over is the solution, rather than merely trying to cement the cracks. By the end of “Red, White and Blue,” which is based on a true story, Boyega’s character finds his point of view on the subject taking a radical shift.

Early on, however, Leroy Logan (Boyega) has every reason to think that he can make some real change within the institution. As a dedicated forensic scientist, he’s well on his way to going to work in the coroner’s office, but a friend on the force insists that Leroy should walk the beat, particularly since the London Police are actively recruiting in what was known at the time as the “Afro-Caribbean” community.

Also cheering on his consideration of police work are Leroy’s “auntie,” a family friend who has worked for years as a liaison between the police and the city’s West Indian population, and Leroy’s wife Gretl (Antonia Thomas, “The Good Doctor”), who playfully but honestly tells him that he’s the kind of person who wants people to witness him at his job, and that he’s a sucker for a snappy uniform.

Less enthusiastic about Leroy’s career choices is his father Kenneth (Steve Toussaint); despite being the kind of upright citizen who’s too embarrassed to play the word “sexy” in a game of Scrabble, Kenneth suffers a brutal beating at the hands of two policemen for the crime of taking out a tape measure to prove that he isn’t committing a parking violation.

Leroy is top of his class, both physically and in the course work, but once he’s assigned to duty, he’s mocked by his neighbors (when one teen calls him “Judas,” Leroy responds, “That’s ‘Constable’ Judas to you.”) and disrespected and discriminated against by his white colleagues, who write racist slurs on his locker, fail to provide backup when he calls for it, and consistently get promotions they don’t deserve while he is overlooked.

His one true comrade on the force is South Asian Asif (Assad Zaman), who’s in the same boat; we see a fellow officer reprimand him for daring to speak Urdu rather than English to a victim of anti-Pakistani vandalism, and the other policemen show no concern about voicing their racist opinions at full volume when Leroy and Asif are sitting just a table away.

Boyega is well cast here as someone who is clearly overqualified for his position and still must face an uphill battle. (There’s one “Star Wars” joke here, which is arguably one too many, but then it’s not like McQueen’s filmography up until now has been loaded with humor.) Boyega and Toussaint forge a powerful father-son bond, even when they disagree, and we see how much of Kenneth’s spine and strictness have gone into making Leroy the exemplary officer he becomes.

As with the two previous “Small Axe” chapters, McQueen and his co-writer (in this case, Courttia Newland, who also shares script credit on “Lovers Rock”) create not only vivid lead characters but also place them within the larger context of their community. We come away with a strong sense of the people for whom Leroy wants to be an advocate, even if they remain dubious that he can do so within the framework of the London Police. Another throughline for “Small Axe” is McQueen’s deft use of pop tunes to capture the era, and “Red, White and Blue” weaves Al Green, Billy Joel and Marvin Gaye into another subtly haunting score by Mica Levi (“Jackie”).

While this entry in the series isn’t as sensual and evocative as “Lovers Rock” or as stirring as “Mangrove,” it’s nonetheless a fascinating take on the outsider-cop story, mainly because Leroy’s relationship with Kenneth, as well as Kenneth’s contentious attitude toward the cops, is given as much weight as the institutional racism of the London Police. It’s a slower burn than those other two “Small Axe” entries, but it builds to a final scene between Boyega and Toussaint that’s quiet but shattering.

Having seen three entries of this five-film cycle, it’s clear that McQueen wants to remind viewers that the past matters because the past never really goes away. The same battles must be fought again and again in the pursuit of justice, and only by learning and understanding those battles of previous generations can we understand how to fight them again in the future.