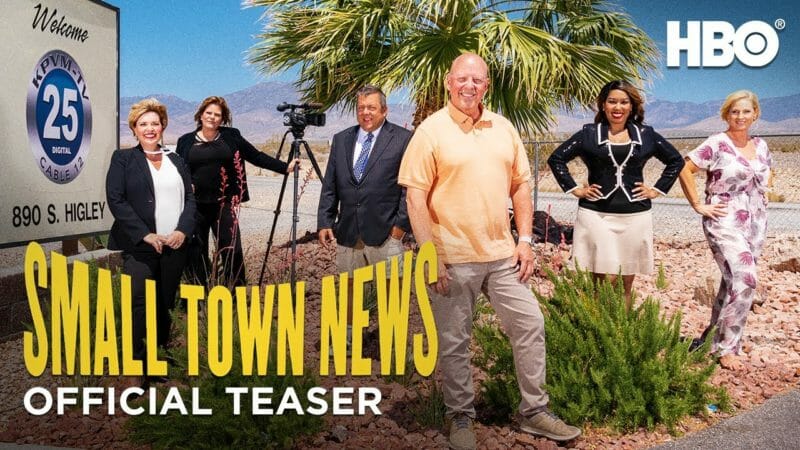 Across six episodes, “Small Town News: KPVM Pahrump” documents the inner-workings of a privately owned news station in Nevada. It’s a curious oddity, and unfortunately for all of the potential in its concept, it stays that way.

By the end of episode one, KPVM has started its plan to expand its outreach to the entertainment capital of the world, Las Vegas. For years their news coverage have been focusing mostly on the town of Pahrump, having lead by the affable Vern. Everyone seems to have many different duties, like Ronda, who is vice president but most of all loves to do the jingles, and is seen singing and playing piano. The new weather guy, John, also ends up getting behind the camera and doing location work, and he too loves to play piano. It’s not uncommon in this miniseries for people to sing songs they’ve written, just as it’s not uncommon for an overworked guy from behind the scenes, like RJ, to suddenly leave. Because this is a family, their pictures are still on the station’s walls after they depart.

And then there’s forces like Deanna, a co-anchor who does it all, and steals the miniseries with her empathy toward various people of Pahrump, and infectious pursuit of self-amusement (with pranks especially). She shares the news desk with Eunette, who balances her time at the station while also teaching about journalism near Las Vegas. All of these people love Pahrump, and among their quest to find quirky local interest stories, they have a serious dedication to the news, and to each other.

As easygoing and easy to watch as it may be, “Small Town News” is always trying to find the story, and it never feels like it does. It’s a shapeless affair, and has the strong feeling that the filmmakers went to this station hoping to capture eccentric sparks from the unique people and their settings. Some documentary filmmakers just stumble onto gold, all the more to make us recognize the normalcy of when other productions does not. As a viewer, you are lulled into the ease of this atmosphere, which comes with pleasant people on camera and a welcoming setting. But there’s no main plot, or larger point; the efforts to build a light, quirky character comedy out of a fly-on-the-wall experience don’t work so well either.

COVID likely screwed up the shooting schedule (the first episode begins in January 2020, the second then jumps to September 2020), and the story gets some focus with the 2020 presidential election in November. An unabashed Trump fanboy, decked out in “Trump Force Ones” merch, Vern wants to use his power with the channel to interview Trump offspring when they tour through Nevada (he’s not entirely successful); Deanna wants to make sure that the Biden campaign is represented but is not met with a welcome response from state Biden representatives; Missey sits in front of an editing bay, trying to figure out how to report a chaotic debate with equal-sides footage. These are interesting notes from episodes three and four that the series helps bring to life. But true to how this show works, it does not create the arc that the overall pacing could really use, so much as represent these different experiences. It’s more of an uncertainty about what “Small Town News” is wanting to point out with these different threads.

The filmmakers edit certain sequences to frame them around the goofy pictures on their office walls, or the puns they share with each other, like forcing a Christopher Guest vibe onto something that pops less than that. Many of the series’ more buoyant moments involve playful music set to slightly quirky actions by the employees, like setting up tech around the studio, or some on-location goofiness. Sometimes the dry quirky tone feels like a last-ditch effort, that if it can’t make the story itself narratively rich, it’ll at least follow around different vibrant individuals who show that even the smallest town has its cast of stand-out characters.

Usually when talking about people in a documentary, it doesn’t seem appropriate to call human beings “characters.” But “Small Town News” provides a bit of an exception, focusing on a cast of people who do not change and seem set in their ways like people in a scripted production. With the docuseries’ anti-arc structure, it’s like meeting them in the middle of a season, and this merely curious oddity hopes will some grand drama and/or comedy will naturally emerge. Everything is pretty low-key, and many people thrive that way. But it doesn’t necessarily make for must-watch TV.

All of season one screened for review. The first two episodes of “Small Town News: KPVM Pahrump” air today, August 2, with a new episode each week.