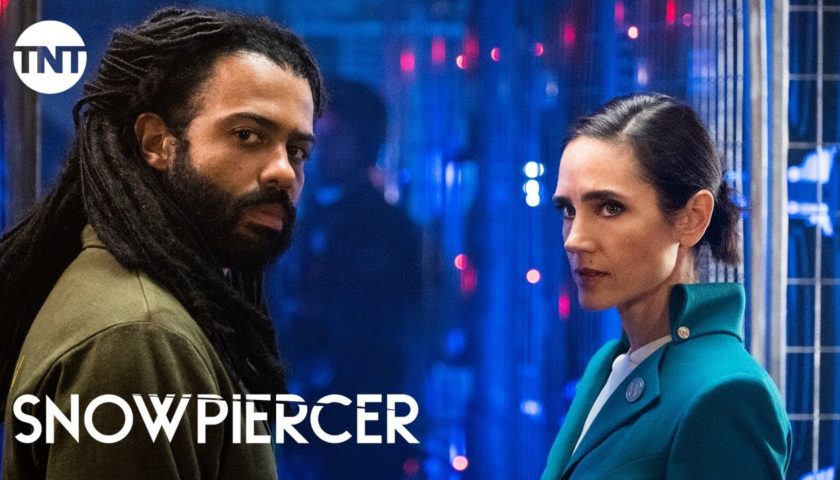 Snowpiercer, TNT’s upcoming hour-long TV show will adapt newly Oscar-winning director Bong Joon-ho’s 2013 South Korean dystopian sci-fi film of the same name. The Snowpiercer TV show will be headlined by an Oscar winner in Jennifer Connelly, who is joined by Hamilton stage standout Daveed Diggs. Plus, Doctor Strange helmer Scott Derrickson directed the pilot (sans reshoots). With Snowpiercer’s uniquely stylized dystopian premise, coupled with its overt political themes of class division, there will certainly be much with which to work when it comes to a prospective ongoing television series. TNT has ordered the project to series, although it always seemed likely, as they had backup scripts ready to go when they first ordered the pilot to production. Snowpiercer is a production of Tomorrow Studios via executive producers Mary Adelstein and Becky Clements and Turner’s Studio T.

Stop us if you’ve heard this one before but Snowpiercer has a new release date. At least this time that new release date represents good news! TNT’s sci-fi adaptation has been moved up two weeks from its original date and will now premiere on Sunday, May 17 at 9 p.m. ET.

If you’ve been following this ongoing saga, the show was originally on track for an early 2019 release date after being in development for over five years. The train of a series was stuck at it proverbial station with pilot reshoots, and was pushed back to the spring 2020 release date. That was to be May 31…but then the coronavirus outbreak happened, leaving spots open in every TV station’s schedule.

Jennifer Connelly (Alita: Battle Angel, A Beautiful Mind) will co-star as a character named Melanie Cavill. A member of the train’s First Class, Melanie is known as the “Voice of the Train,” heard across all cars through a PA system, making daily announcements. While, the idea of front-end First-Classers looking down upon the back-end peasants is par for the course of the established story, it seems that Melanie fields a fascination with the other half; a fascination that may just put her in the orbit of Diggs’s Layton Well during a subsequent upheaval. Daveed Diggs (Hamilton, Blackish) will co-star as Layton Well, a prisoner living in the dregs of the train’s societal steerage in the back end. Described as a “quiet thinker” who spends his days tending to a cage filled with pet rats and sniffing a makeshift drug made from industrial waste called Chronole, Layton becomes an unlikely participant in an upheaval that could see caste clashes on the train. Rowan Blanchard (The Goldbergs, Girl Meets World) plays Alexandra, described as “a self-assured 17-year-old, wise beyond her years, with mysterious connections to the history of Snowpiercer.” Blanchard’s deal will reportedly see her onboard Season 1 as a guest star with an option to become a series regular in the event of a Season 2 renewal Rounding out the cast are Ido Goldberg, Jaylin Fletcher, Steven Ogg, Shaun Toub, Aleks Paunovic, Mickey Sumner, Alison Wright, Benjamin Haigh, Lena Hall, Aaron Glenane, Kerry O’Malley, Aaron Glenane, Fiona Vroom, Timothy V. Murphy, Happy Anderson, and Jonathan Lloyd Walker.

2013’s Snowpiercer, directed by Bong Joon Ho, adapting the French comic book Le Transperceneige by Jacques Lob, Jean-Marc Rochette and Benjamin Legrand, seemed like an odd foreign film detour for Marvel Cinematic Universe Captain America Chris Evans. Yet, with a limited U.S. theatrical release, the South Korean film managed to achieve respectable box office numbers with $86.8 million USD worldwide. ($4.5 million from the U.S. release.) Moreover, the breadth of its critical acclaim in the States widened by way of DVD/Blu-ray, VOD and premium cable airings. The Snowpiercer mythology depicts a society living in the aftermath of a catastrophic climate engineering experiment that left the Earth engulfed in an ice age, relegating the remnants of humanity to live on a massive experimental locomotive – the titular Snowpiercer – powered by its own perpetual motion, rounding a circumnavigational track. Thus, TNT Snowpiercer pilot is set seven years after the events of the 2013 film, which ended in a major act of back-end sedition with the derailment of the train by way of an explosion-triggered avalanche. That, however, was only a temporary setback for the Snowpiercer. However, as its class divisions remain prevalent, seeds of a revolution are sowed and people like Daveed Diggs’s introverted prisoner Layton Well are swept in its force.