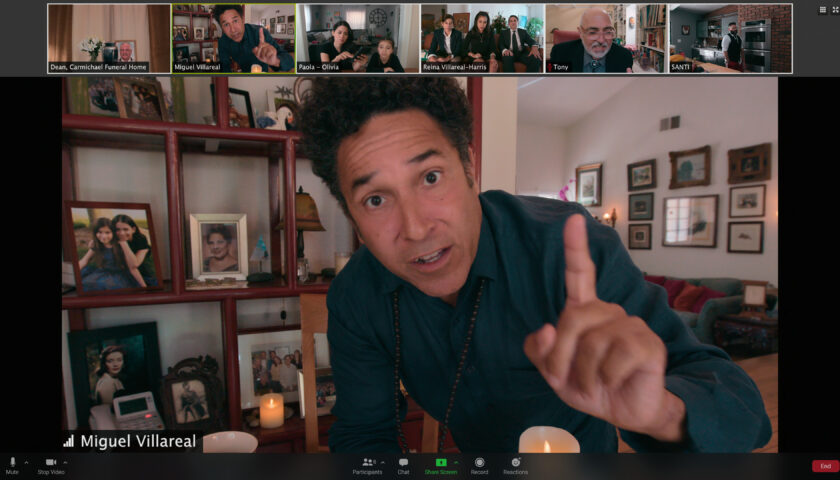 When mid-October feels like March eleventy-ninth, do we really need a TV show to remind us — and not particularly accurately — what April and May felt like?

Netflix’s new anthology drama Social Distance is the latest series to mine stories from the quarantine — and the latest to yield more pyrite than gold. Created by Hilary Weisman Graham and executive produced by Jenji Kohan (who worked together on Orange Is the New Black), the show deliberately skews small, focusing on domestic or romantic troubles — the indignities of a Zoom funeral, trying to get a crush’s attention using only the internet — in episodes that rarely exceed 20 minutes. What Weisman Graham is aiming for, I think, is a mosaic portrait of how this collective trauma has impacted everyone’s life in different ways (and with varying force, depending on one’s walk of life), as well as how the tenor of the quarantine changed between early April and late May, when protests erupted in response to George Floyd and Breonna Taylor’s killings.

But like pretty much all COVID-centric series thus far, Social Distance suggests that we’re still too close to the subject matter to say anything meaningful about it. Only three of the eight chapters manage to transcend the overall feel of the series, which could be summed up as “thinly fictionalized stories of news articles you’ve probably read, told via disappointingly uneven performances.”

The plight of a nursing-home aide and single mom (Danielle Brooks, acting alongside her real-life mother LaRita Brooks) who has to leave her kindergarten-age daughter (Rocco Luna) alone in their apartment and monitor her via nanny cam after schools shut down is the show’s intended “empathy machine” humming along at its maximum effectiveness. A gay couple (Brian Jordan Alvarez and Max Jenkins) clawing at each other in their cramped home, then seeking relief in a casual sex partner for a threesome, probably make for the most well-rounded installment. And Becky Ann Baker — playing a retired doctor who feels compelled to help out at her former hospital despite the risks to older people, to the frustration of her long-neglected husband (Baker’s actual spouse Dylan Baker) — makes her episode work through sheer force of will.

Unfortunately, the majority of Social Distance’s first season doesn’t have the benefit of performers like Baker who can overcome the Zoom windows and other static-on-purpose camera work.

Much of the action takes place within desktop windows: Instagram for an out-of-work and newly sober barber (Mike Colter) checking out pictures of his ex; Facetime for communications between an overwhelmed dad (Peter Scanavino) and an ailing wife (Ali Ahn) whose guest-room door should stay closed to protect their toddler son (Leo Bai-Scanavino); video game-centric Discord among teens. Other characters appear in home-security-style footage (with the accompanying product placement), which explains the immobility of the camera, not that that makes the series any more visually engaging.

The writers miss a chance to further character development through their protagonists’ online microniches, though it makes sense that they’d let that opportunity slip by — Social Distance is more interested in fostering a sense of we’re-all-in-this-together-ness than in creating distinct, idiosyncratic characters.

And while it’s commendable that Weisman Graham strived for a diverse cast, it’s frustrating that the three episodes that deal most explicitly with race are some of the most tin-eared of the season. A couple of those installments are left unresolved, which may feel emotionally honest to the times, but also adds to the sense that the writers aren’t quite sure what to say about the issues they clearly understand are pressing. That’s never clearer than in the final episode, in which a young Black employee (Asante Blackk) of a speaker company blows up at his more conservative Black boss (Blackk’s father Ayize Ma’at), himself the victim of looting during protests that have turned violent in their unspecified city. Their impasse — though certainly reflective of real-life tensions — as framed here feels unconvincing and direly incomplete, like an attempt to distill a fog that continues to envelop us and whose boundaries we won’t know for a long while yet.

But Social Distance probably disappoints most because, save for a couple of exceptions, its emphasis on the domestic and emotional slights of the pandemic doesn’t really resonate with my, and I would guess a lot of other people’s, experiences. The show is too reticent to get political, or tragic, or existential, even though an indelible part of the trauma of quarantine has been the slow acceptance that many of us are losing, if not loved ones or ready access to them, at least a year of our lives. Nor does it quite capture the feeling of trappedness in our own homes, nor anywhere near enough of the family complications exacerbated by forced cohabitation. Quarantine forced its stories to be small, but the series is ultimately undermined by the meekness of its own ambitions.