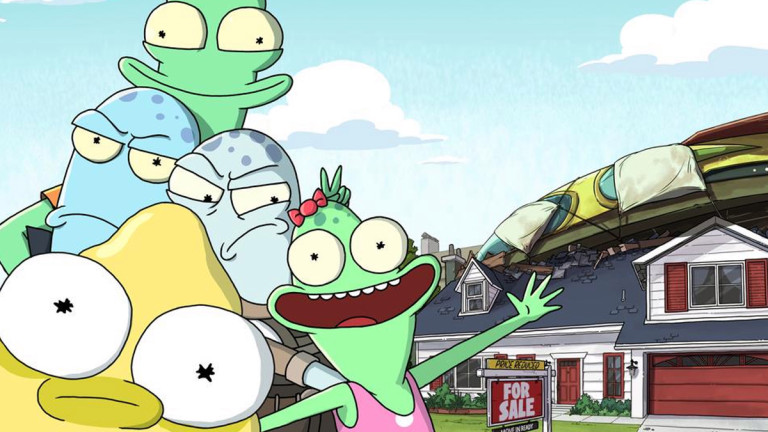 The closest thing that “Solar Opposites” has to a traditional pilot is its opening credits, which has blue alien Korvo giving a succinct, 30-second explanation of why he and four other compatriots had to leave their dying home planet, only to crash on Earth. Part of why it skips the usual intro “how they got here” chapter is that it’s a familiar story — not necessarily repetitive or derivative, but familiar. If there’s one strength of this new Hulu animated series, it’s that it knows how to use those kinds of shortcuts to its advantage.

The two most popular animated American series of the last 30 years — “Futurama” and “American Dad” — each had spiritual successors that turned to aliens in some respect, but “Solar Opposites” embraces the challenge to differentiate itself by not building its entire success on a series of basic fish-out-of-water stories. Beyond the often-unmodulated grumblings of Korvo, there’s his overeager, party-hungry de facto first mate Terry (Thomas Middleditch) and a pair of younger Shlorpions: the more socially obtuse Yumyulack (Sean Giambrone) and unintentionally mischievous Jesse (Mary Mack).

Yes, Korvo and company have a bit of a learning curve to grapple with. (The show gets more-than-expected mileage out of Terry not realizing that children’s TV characters aren’t real or what the purpose of a mancave is.) But their being a collection of intergalactic travelers gives “Solar Opposites” a chance to play around with a different kind of family dynamic. These Shlorpions are more a handful of roommates who show up in the suburbs and try to adjust to a new neighborhood. That the show begins with them a decent amount of time into their unintentional stay means that there’s less for the show to have to grow into over its first season. It can take advantage of their situation right away rather than spending multiple episodes establishing ground rules.

Series co-creators Roiland and Mike McMahan (who also co-wrote the show’s first episode) both come from the central braintrust behind Adult Swim’s “Rick and Morty.” While this new series isn’t exactly hiding from that other show’s DNA — for starters, the credits font and rough human character design is awfully similar — it’s another example of how “Solar Opposites” can draw from what it wants and rework the rest. Some of Rick’s condescension is rooted in Korvo — Roiland voices both characters — but it’s a performance that relies on other emotional levels because there’s not the same ingrained assumption of interdimensional genius at every turn. (After a season’s worth of slight variations, that opening credits narration and the title card sting should be sustainable for as many more episodes as they want to keep them.)

“Solar Opposites” isn’t exactly a bastion of humility, but these characters can have a shared sense of discovery more often. Korvo and Terry get a fair share of the wacky adventures, but the key counterbalancing force in “Solar Opposites” is Jesse (Mary Mack), whose mix of teenage angst and casual approach to using Shlorpion powers add a different temperature to the show. In a show where any solution often only leads to five more problems, Jesse is the character you end up wanting to see try to put out those sprouting fires.

As much as “Rick and Morty” incorporates the Smith family, that show has often been more or less a showcase for the two title characters. “Solar Opposites” often pairs up Korvo and Terry to drive its central storyline, but it feels less insular in the process. There’s a greater effort to expand out from its center, rather than quadruple down on a single relationship. There’s still a steady stream of pop culture nods and general irreverence (fun drinking game idea: take a shot every time there’s a Hulu jab) and more than enough cartoonish violence visited upon aliens, humans, and animals alike. If those rhythms are recognizable to the audience, they’re less so to the Shlorpions. Over the course of a season, it makes a difference.

There’s also a healthy crossover in the guest stars between the two shows. Yet, those contributions highlight another key difference that “Solar Opposites” thrives on. Rather than bring in recognizable voices for self-contained one-offs, one of the show’s smarter moves is working in an unexpected side arc, Trojan Horsed inside what seems at the outset like a throwaway gag. Jesse and Yumyulack’s penchant for shrinking people who annoy them leads to a disturbingly vast collection housed in a makeshift terrarium in their room. At the risk of giving away too much about what evolves inside The Wall, the lives of the miniature humans who populate it gradually becomes the show’s most compelling subplot.

One of the strongest characteristics that the show borrows from its predecessor is the sheer amount of information packed into every episode. This is a show that rarely takes its time. Watching things escalate from tiny misunderstandings to disasters threatening to destroy a city or reconstitute the fabric of timespace is this show’s sweet spot. That blending of sitcom mishaps with sci-fi consequences bring plenty of opportunities for large-scale body horror monstrosities to smaller, simpler creature design. (Wait until you see what a Goobler is and how they’re made.) The explosion of detail is especially notable inside The Wall, where the society that evolves from discarded household trash becomes even more complex than the one outside.

In the process, it streamlines plenty of the fertile territory that other sci-fi animation has trod before: mind control, a mysterious new species, robots run amok. That, in turn, paves the way for the handful of elements that aren’t as familiar to shine in their own ways. Take the Pupa, the last of the Shlorpion group, a slithering yellow pet that’s always good for some silent background gags.

The Shlorpions take it as a basic assumption that the Pupa’s destiny is to one day evolve and transform a new territory in the image of their home world. (The more Korvo recites this idea in a matter-of-fact way, the more entertaining it gets.) In a way, that’s kind of an appropriate metaphor for the show. With frequent inspired flashes and reliably funny even when it’s dealing in recognizable areas, there’s just as much value in knowing that it could take on any future version of itself with the same anarchic spirit.