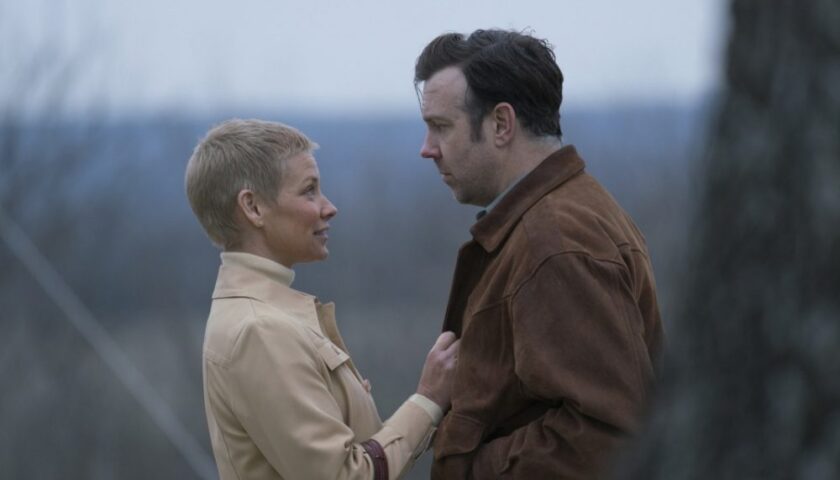 With the Emmy-decorated, too-many-people’s-favorite-show-to-count triumph of his role on “Ted Lasso,” Jason Sudeikis has joined the rarefied club of all-stops-out comedians who make the transition to becoming full-on dramatic actors. That said, “Ted Lasso” is a drama streaked with comedy. So you could say that Sudeikis, for all the adoration and acclaim he’s earned, still hasn’t quite entered the fabled upper echelon of the “All comedians want to play Hamlet ­— but only a few get to do it” stratosphere.

That may explain why he signed on to play the lead role in “South of Heaven,” a seedy indie romantic crackpot noir, set in Texas, that casts him as a convict doing all he can to stay out of trouble. At first, the movie seems like a variation on “Straight Time,” the 1978 Dustin Hoffman drama that’s still one of the most authentic films of its era about the actual squirrelly lives of petty criminals. In the opening scene, Sudeikis’s Jimmy Ray makes his plea before a parole judge. He has spent 12 years in prison for bank robbery, though the way the film presents it the crime was an aberration — a solitary mistake he made for messed-up personal reasons. And Jimmy’s pitch isn’t based on the usual theater of contrition. His long-time love, Annie (Evangeline Lilly), has lung cancer and has been given a year to live. He’s desperate to join her again and take care of her. The parole is granted.

When Annie picks him up at the prison gate, she’s got close-cropped frosted hair (her attempt at a kind of Annie Lennox style in the aftermath of chemo), which inspires Jimmy to say that she looks like an angel. Sudeikis comes on like the Dennis Quaid of the ’80s, with a little less smiley assurance but a lot of cowboy charm. It’s there in his courtly intelligence, his gentle dot-eyed valor, and the way that Sudeikis clearly feels most comfortable acting from behind a folksy drawl. He and Lilly do a nice job of establishing a love connection, and that gives the audience a rooting interest in seeing Jimmy stay straight.

Then he meets his parole officer, a sawed-off sadist named Schmidt, played by Shea Whigham in a bolo tie, a giant Stetson, and sideburns like triangles. Whigham gives one of those delectably condescending performances as a Southern gentleman who’s really a passive-aggressive power freak. (The more polite he is, the more creepy and treacherous.) For a while, the character seems a riff on M. Emmet Walsh’s heartless stooge of a parole officer in “Straight Time,” but the difference between that movie and this one is that Whigham’s Schmidt is revealed, before long, to be flagrantly corrupt, the kind of person who will plant two grams of cocaine on you to get you to do what he wants. The other difference is that “South of Heaven,” as directed by the Israeli-born filmmaker Aharon Keshales, is a piece of underworld gonzo claptrap.

In the early sections of the movie, when Schmidt is putting the squeeze on Jimmy, their encounters are charged with tension. But then Jimmy takes a midnight ride and gets into even more of a pickle, all because of a freak accident. The coincidences and contrivances start to pile up, but even before that happens the movie has been robbed of its import as a drama of action and consequence. Jimmy is now in serious trouble, only his predicament has nothing to do with who he is.

A criminal enters the picture, a ruthless underworld business kingpin named Whit Price (Mike Colter). How can Jimmy defend himself, and Annie, against this smooth-talking homicidal mobster? That becomes the essence of the movie: watching Jason Sudeikis out-scheme a schemer and go badass. And Sudeikis convinced me that he could be that guy…if his character didn’t have to keep doing things that come off as borderline preposterous, like kidnapping a child and arguing with him as if they were in some pilot for a sitcom (“Psycho and the Kid”). Mike Colter plays the mobster with some style, but the character is a vicious sociopath; who’s revealed to have a heart of gold; until he doesn’t. This is filmmaking as rickety moment-to-moment opportunism.

Keshales cowrote “South of Heaven” with Navot Papushado, who was his co-director on “Big Bad Wolves,” the 2013 Israeli black-comic revenge thriller that became a cult film, spurred in no small part by the enthusiasm of Quentin Tarantino, who hailed it as the best movie of the year. I doubt he would make the same claim for this one, though to me the trouble with both films is that to grab you they’re all too willing to fracture the reality they’ve created. There’s a place for this kind of smash-and-grab filmmaking — see “Gunpowder Milkshake,” the Tarantinoid action fantasy that Papushado directed this year — but “South of Heaven” takes too many corkscrew turns you can’t buy. The movie gives Jason Sudeikis a chance to act without the safety net of comedy, and he proves that he’s got the right stuff. But next time he needs to do it in a movie that offers the safety net of believability.