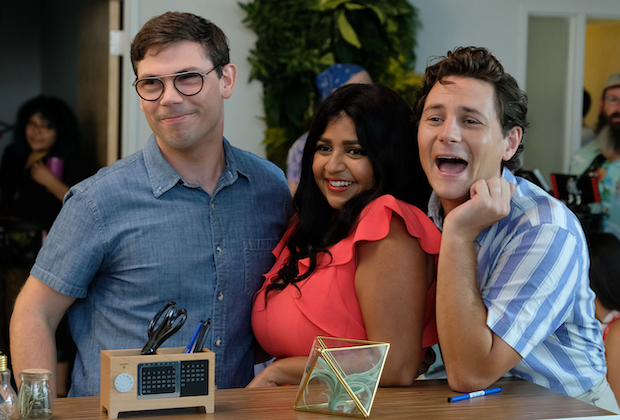 Writer-actor Ryan O’Connell can list all the “blood, sweat, and queers” that went into his ground-breaking Netflix show, Special, and without missing a beat argue how the 2014 French erotic thriller Stranger by the Lake begat the modern “murder me, daddy” memes. It’s just something he’s been thinking about during his weekly “gay movies club,” where his friends “watch queer movies and talk s—.” “This guy literally sees a guy drowning his boyfriend and instead of being like, ‘Hmm, I like bad boys but maybe this is taking it too far,’ he’s more obsessed — which honestly, #relatable,” O’Connell says. “He’s like, ‘If you love me, you’ll also drown me in that lake.'”

It’s this kind of whip-smart wit that put O’Connell, 33, on Greg Berlanti’s radar. “He’s such an incredible talent and voice,” the Arrowverse architect says. “We were trying to figure out something to do together and he went and did this wonderful show. He [is] on my list of storytellers that I’m glad that we have coming for tomorrow.”

O’Connell believes “the stars need to f—ing align” in order to get anything made in Hollywood these days, especially in quarantine. “It’s such a weird business,” he explains. “It sometimes feels like you’re working in a vacuum. There’s some people who sell three shows a year and then write the pilots and they never get picked up to series and you’re like, ‘Is anything I do real?'” But the stars aligned for O’Connell with the 2019 debut of Special, a comedy starring O’Connell that he based on his own experience as a gay man with cerebral palsy.

O’Connell got his start in “a hipster sweatshop” — he means writing essays for the website Thought Catalog — before working on shows including Will & Grace, Awkward, and Daytime Divas. “Greg took an interest in me before anyone else did,” he says of the Broken Hearts Club and Love, Simon director. “I wrote this pilot that I’m pretty sure was garbage when I was 27. I was starting to work in Hollywood and my agent sent it to Greg and Greg really responded to it.”

This isn’t the script that would end up being Special, mind you. This was before the release of his 2015 book I’m Special: And Other Lies We Tell Ourselves, which would lead to the Netflix series. “I just didn’t know how anything worked,” he recalls. “It was like, ‘Wait! What? Greg Berlanti wants to meet with me? What’s happening?’ It was so confusing. And, of course, 90 percent of things in Hollywood don’t work out. So, the thing that we wanted to make together didn’t end up happening. But I thought it was really amazing that Greg was taking an interest in my work. I think it’s really rare for someone of Greg’s stature to really nurture young talent and champion emerging voices.”

When O’Connell did finally sell a project (now we’re talking about Special) he felt like he snuck “into the back door [of a club] when the bouncer fell asleep.” The Big Bang Theory’s Jim Parsons took notice of the writer’s memoir, which was an expanded take on one of those “hipster sweatshop” pieces O’Connell once penned about using a car accident to hide his cerebral palsy. As producers, Parsons and husband Todd Spiewak helped turn this tale into a series of 15-minute-long episodes written and executive produced by, and starring O’Connell as “a younger, more damaged version” of himself — who’s also named Ryan.

“We made this little show in Austin, Texas for little money,” he says. “Everyone I think was just like, ‘Hey, I think this is good. I hope people like it. Who the f— knows about a gay disabled person?’ To be in a position to actually get something made is huge, but then have it be so well received is also that much more rare. I feel very, very grateful and very privileged to be in this position.”

O’Connell cracks “it’s probably all downhill from here,” but even in quarantine he’s chasing those checks. After all, “I’m a Virgo, honey. I don’t f— around. Productivity is my drug.”

Filming on the first half of Special season 2 wrapped when the coronavirus derailed production, so he’s been “full time” editing those four (out of eight) new episodes. Season 1, written entirely by O’Connell without a writers’ room, ended with the character Ryan feeling like he conquered cerebral palsy. He moved out of his mom’s house to live on his own. He found a bestie (Punam Patel’s Kim), a love interest (Augustus Prew’s Carey), and a job (at a Thought Catalog-esque digital magazine, no less). Now, for season 2, O’Connell assembled his own writers’ room for a story that “really levels things up”… or as he more aptly puts it, “You think I was gonna write that s— again all by myself? Take years off my life!” Ryan’s journey is now about realizing “that being honest with who you are is only part of the struggle,” O’Connell says. “He still has a lot of issues regarding disability and not everything is footloose and fancy-free.”

O’Connell is still “frustrated” more shows don’t tackle subjects like this, but feels pride in being one of the first productions to do so for a central disabled gay character. “I think anything that still has a stigma attached to it just naturally excites me,” he says. “I think there shouldn’t be any of that, especially with gay sex. I’ve had to suffer through so many straight sex scenes and now everyone else has to pay.”

With so much currently up in the air, O’Connell doesn’t know when viewers will see season 2 of Special, but he’s not twiddling his thumbs. He recently pitched a new show (“it’s too early to say anything, it’s like barely a thing”). And, “against all advice from the publishing industry and doctors and friends and family,” he’s also writing a novel — but not about the quarantine experience. “I wouldn’t do you dirty like that,” he says. “I don’t want to see that. I’m living it. It’s too soon, babe. Let it go. There’s going to be so many f—ing quarantine scripts coming out of this s—, let me tell you. And the only ones that can do that are like High Maintenance.”

He might have no choice in the matter. Someday he’ll probably return to a writers’ room for someone else’s show, which he says will be “interesting.” O’Connell calls the team on Special as this “utopian society of all gay people and women” who supported his vision. “It was Heaven,” he says, “But I also am excited to work on another TV show that’s not mine, because when it’s your own thing, it’s so all-consuming. There’s something really pleasurable I think about being in service of someone else’s vision and helping them bring it to life — and not having to work 18 hours a day.”