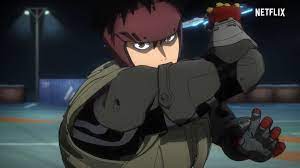 Yu Ominae is a student who is leading the dual life of a hero. He serves his country as a Spriggan and is on a mission to protect confidential material. Yu has to fight America and China with his life to complete his mission. Spriggan begins on an interesting note – with mysterious men conducting research. Of course, with that you already know there is going to be a lot of chaos.

The character Spriggan is introduced to the show soon after. Actually, named Yu Ominae, his story is revealed with the first few minutes of the show. Of course, being the lead protagonist, he is heartwarming as a character. He is reckless like most anime heroes but still manages to make you smile, again, like most of them.

After some while into the series, it is revealed that Spriggan is not a person but actually an organization and Yu is simply a pivotal part of this group. Hummingbat is the typical antagonist. He isn’t the scariest from the anime world but comes pretty close with his superpowers. After him, every antagonist keeps getting stronger and weirder. They are less human, in the literal sense. Thanks to that, Yu fighting them all and winning becomes more and more unjustifiable.

The best part about this show is its story. There’s always something new and it’s still interesting. However, that feeling lasts only for the first two episodes. Since then, it’s just a ride downhill. The action in the series is very basic. Having seen so many superpower animes, this one is pretty mediocre in that sense. Nonetheless, that does not, in any way, lessen the intrigue for this storytelling.

Spriggan the series is also a visual delight, at least in a few scenes. The lighting of Shrine of Fire is one such moment. America and Japan’s relations with Japan are a part of this anime series. At one point, keeping up with them is confusing but it is what it is.

The music in this series does not work in its favour. It’s out-of-place and simply doesn’t sync with the scenes. The story has many adaptations from Indian epics like Ramayana. The biggest example is that of an evil demon taking the princess away from the prince.

Another reference is from famous anime series, including Naruto. This is the clone technique, which becomes rather bizarre when added to the real-looking characters who have been given the back story of an army.

After a point, the story gets monotonous and very predictable. It goes on in the same flow – villains attacking the hero and him surviving it all and leaving them alive because of his generous heart. This age-old formula is used so many times that it has become ancient.

While not being too appealing a story, the end is rather too poetic. If this show would have managed to connect, then maybe the end would have been somewhat perfect but since Spriggan becomes a bore after going on in circles, you have no interest left in the show till the end.

Spriggan is one of the experimental anime series which do not work. It is once again age-old formula translated on screen. While the show promises something brilliant, this feeling dies soon enough. It would be better to skip this one, except for the visuals but even they get boring after a point.