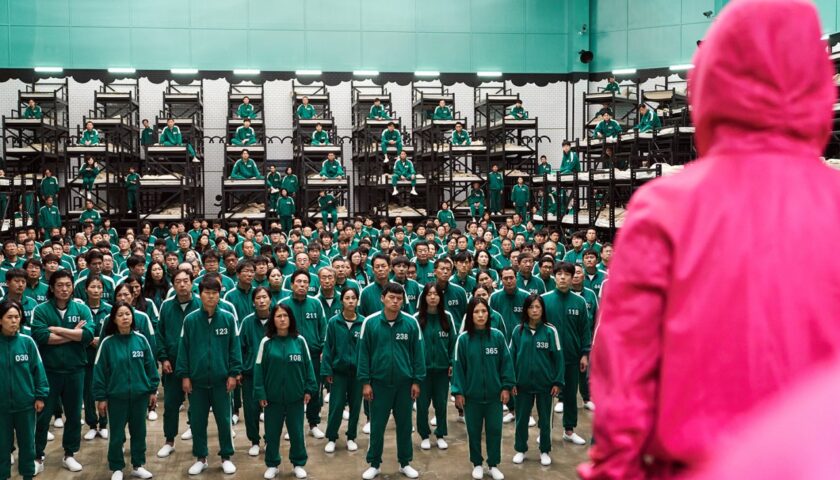 You just name it and this web series got it all….love, sex, games, betrayal, humor, emotions, twists, drama and what not!

This series is about a group of 456 players who get a chance to get off their economically miserable life by winning 46 billion wons and that is by winning in 6 games, a few of them being kids game. But its not so easy peasy as one thinks as each game has dire consequences and shrewd twists.

All these long 9 episodes are super gripping and interesting. The games are quite thrilling to watch as players are forced to make some real shocking decisions and betrayals to win. What you notice is so many different shades of human being comes into play when money is the subject OR you could say, when money is the subject, there is little room to loyalty.

I will agree Ep 6 is the best of all. Gganbu! This is the longest and by far the best i have seen. The game that they are given to play comes with a twist when players thought it to be otherwise and that part was quite fun to watch until….they are forced to make some shocking decisions to decide who should win. This episode tests the loyalty of people against the ones they love or have developed a good relation. It throws the audience into thinking….who should live and who should get eliminated! Not to forget, this , along with the last episode oozed emotions.

But Episode 9 too is quite great as it comes in with a shocking twist! It puts forward the same question that generations after generation has been asked…”Can money buy you happiness?”. It also leaves some questions unanswered…what is the FRONT MAN’s exact goal (FYI, this man too is a twist factor) and who is the mysterious handsome guy who gives Gi-hun that card?

There’s just so much in this series and everything is executed next to perfectly. The VIPs though are very bad in acting that is one negative. Overall, a must watch entertainer which can be binge watched in one go (or you may take two days considering it is a bit too long).