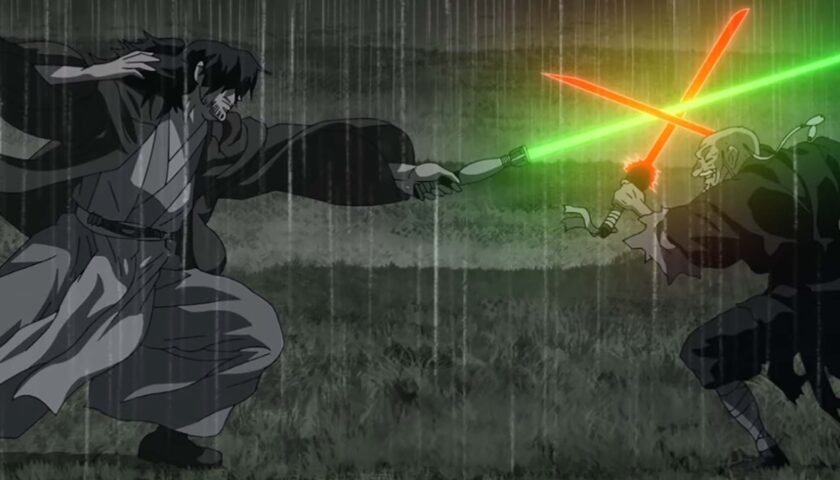 At its best, Star Wars feels infinite. The galaxy far, far away sprawls in all directions and dimensions like it’s always been there, encompassing more stars and planets and stories than it’s possible to count. The actual Star Wars productions, however, don’t always live up to this potential. Too often, they contract into a tight orbit around a small cluster of families in the name of serialized storytelling and fan service. In the process they render everything around that orbit only as important as it is relevant to plotlines we already know very well.

So what a delight it is that Disney+’s new animated anthology Star Wars: Visions embraces the limitless wonder of this galaxy, reaffirming it as one where anything can happen to anyone. The only real connective tissue between its episodes is a love of Star Wars that runs so deep it’s bound to make new fans of the young and uninitiated, and remind old fans why they fell so hard for this universe in the first place.

Touted as the franchise’s first venture into anime, Star Wars: Visions consists of nine vignettes produced by seven Japanese anime studios. Each installment focuses on a different cast of characters in a different setting, few of them familiar to Star Wars fans. The episodes vary wildly in tone, style and even sound, but none overstay their welcome, clocking in at just 13 to 22 minutes each.

The series makes a strong showing out the gate with Kamikaze Douga’s “The Duel,” an Akira Kurosawa-inspired ronin story rendered almost entirely in stark black and white, with color reserved solely for glowing lights, like the shaft of a lightsaber. But its cleverest stylistic touch is to scuff up the picture so it looks like an ancient reel of film. It leaves the impression that we’re not watching these events as they unfold but watching a movie about them from somewhere within the galaxy — as if we’ve just popped over to a theater on Coruscant for dinner and a movie.

From there, it’s a head-spinning shift to Studio Colorido’s rock-soundtracked “Tatooine Rhapsody.” Despite cameos from some familiar faces, this second episode might be one of the least Star Wars-y Star Wars stories ever put to screen: It’s centered not on vicious villains or noble warriors, but a middling rock band. Even by the standards of Star Wars: Visions episodes, which never stick around long enough to dig all that deep, this one feels featherlight — but its cheerful indifference to the usual good-vs.-evil dichotomy serves as a reminder that there’s more to life in the galaxy than lightsaber battles and space dogfights.

Most of the episodes do, however, involve lightsabers in some fashion or other, often to tell the story of a young person who desperately longs to wield one. The best of this bunch is episode six, Science Saru’s gentle “T0-B1.” Its title character is a childlike droid on a desolate planet who’s heard tell of the Jedi and daydreams of becoming one himself someday. While it’s the installment that feels most directly aimed at kids (most are suitable for all but the youngest kids, and none are strictly for teens and grown-ups), anyone who grew up playing with Star Wars action figures is bound to relate.

For an anthology, Star Wars: Visions is remarkably consistent in its quality. There are no flat-out bad episodes in the bunch, though some are stronger than others. The weakest tend to rely too heavily on a prior investment in the ongoing battle between the light side and the dark side — like episode three, Trigger’s “The Twins,” which spends too much time on complicated schemes and speeches and not enough time fleshing out the characters executing them. But even that episode has plenty to recommend it, like a simple but eye-catching visual style and a deliciously dramatic voice performance by Alison Brie (in the English dubbed version).

Though the series is being released all at once, it’s better enjoyed one morsel at a time. Binge-watch the whole thing and it becomes apparent that a few basic plot beats and a few references tend to pop up again and again. (If you took a shot every time someone said “I have a bad feeling about this,” you’d have a strong buzz going by the end of the series.) Besides, it’s an experience rare enough to be worth savoring. Star Wars: Visions taps into the part of Star Wars fandom that’s less about filling in plot gaps or cataloging factoids than it is about simply existing in that galaxy with no deeper agenda. And in doing so, it makes Luke Skywalkers of us all, gazing off into the binary sunset and dreaming of distant adventures.