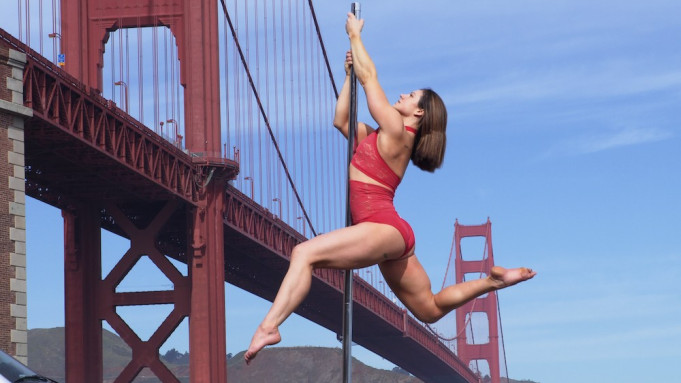 In “Strip Down, Rise Up,” an attendee of S Factor’s beginning pole dance course admits to her fellow students that the class is nothing like what she thought it would be. “When I showed up, I wasn’t scared,” the woman tells those gathered in a circle. “Now I’m a little scared.” In her welcoming remarks, S Factor founder Sheila Kelley promised that might happen. Whether Amber, the pert, fit newbie, will stick with the L.A. studio’s six-month course remains to be seen.

She’s right, though. The class at the heart of “Strip Down, Rise Up,” upends expectations. So does director-producer Michèle Ohayon’s cinema verité movie. Debuting on Netflix (where the subject might attract the wrong kind of audience, or precisely those who’d connect with it most), the doc is poignant, surprising and deftly reawakens questions about “patriarchy” — not by being a pole-dancing polemic but by foregrounding its characters’ experiences.

The strip club and its pole have become a de rigueur gesture in U.S. popular culture, a sign of adult entertainment’s incursion into the commonplace. Although Kelley discovered pole dancing while researching her role in the 2000 indie “Dancing at the Blue Iguana,” this doc isn’t concerned with strip clubs and their habitués. Neither is Kelley’s work, what she calls a “feminine lifestyle practice.” When Kelley calls Amber a “little man,” it’s a surprisingly tough-love observation. But then, the male gaze and its ability to wheedle its way into how women see themselves, their bodies, other women, is a target.

The filmmaker worked with three female cinematographers, and it shows. This documentary could have had a Women’s Studies 101 vibe. Instead, something worthy of witness and humility happens in the unfolding of the six-month course. There are a lot of tears, some of it “ugly crying,” as one character describes her weeping. There’s a remarkable amount of trauma sharing. Fear is met with blossoming trust between the classmates and their instructors. Flesh has its place in the tale. It sags. It can be flabby, pitted or muscular. At S Factor, shame is often in a dead heat with the male gaze as persona non grata.

Ohayon and her film crew capture with impressive intimacy each of the interviewees, but especially the neophytes of S Factor. There’s a lot of charm to this corps de pole of beginners. When they head off to buy shoes for their dancing, the excursion provides another a bonding opportunity. Who knew six-inch heels could heal?

Amy’s husband, Keith (a tech exec), and Kelley’s husband, Richard (whom you’ll recognize from his acting roles, most prominently as Toby on “The West Wing”), have cameo roles as supportive husbands. But not all mates come through: Competitor Allison Hudson, a self-described Christian, and her husband come to loggerheads over her love of the artform.

The women whose bodies and lives are being reshaped at S Factor vary in ethnicity, body type, age, sexual identity. One is a breast cancer survivor. Another is living with Lupus. Still grieving, Evelyn Oshita enrolls two years after her husband died unexpectedly. Many — entirely too many — have experienced sexual assault. Former gymnast Megan Halicek (who testified at the trail of serial abuser Larry Nassar) is among the beginners who know firsthand that trauma gets entombed in the body. A psychologist holds sessions with Kelley and her instructors about the challenges and ethical duties that come with releasing that energy.

All that trauma may sound too grim. It can be for some of the women who arrive at S Factor looking for some version of vertical Pilates. But the doc tenaciously hews to the “rise up” promise of its title. When Evelyn arrives at a class with red opera gloves, it’s just another cause for celebration among many.