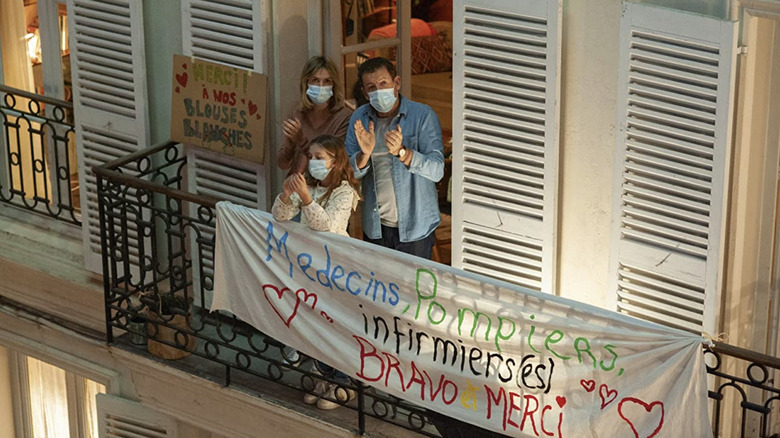 The COVID-19 pandemic completely upended the way many people went about their daily activities. For the first time in a while, many people realized what was truly important in life. People were willing to sacrifice going out and being in crowds for the greater health of the country. And it’s forever made people feel insecure about how much toilet paper they have in the house.

t’s safe to say the pandemic will continue to influence art for some time to come. Not only are TV shows still in the midst of COVID storylines, but many movies have already come out that deal with the impact of quarantine. Films like “Songbird” and “Locked Down” captured the essence of what it means to remain separated from your fellow man, and it appears as though another movie is on the horizon to deal with this same subject matter.

“Stuck Together” is a French Netflix original movie that also looks at what “community” truly means. Here’s everything we know about the film so far.

According to IMDb, “Stuck Together” will premiere on Netflix on October 20, 2021. Despite a vaccine readily prevalent within the United States, the pandemic continues to rage on, with numerous people contracting and getting hospitalized as a result. We’re by no means out of the clear, so “Stuck Together” should come out at a time when its subject is still in the headlines. Hopefully, the virus carries on with a downward trajectory so that everyday life may resume in the near future.

It’s important to note that October 20 is a Wednesday, so you’ll have a little something to enjoy in the middle of your workweek. It should give the movie plenty of time to draw in viewers before “Dune” makes its way to theaters two days later. “Stuck Together” is a smaller film, so it would be great for it to find an audience before it becomes overshadowed by a glut of blockbusters coming out toward the end of 2021.

“Stuck Together” follows a group of individuals who all live in the same building together when shutdowns from COVID-19 begin to take effect. They all come from incredibly different walks of life, from a café owner to a sports coach, and like each other or not, they’re stuck with this random group for the duration of the lockdown. Suffice to say, it leads to some conflict.

Director Dany Boon has done an outstanding job collecting an amazing ensemble cast to bring this story to life. Some of the actors listed on the film’s IMDb page include Yvan Attal (“Seberg”), François Damiens (“Heartbreaker”), Laurence Arné (“The Perfect Date”), Liliane Rovère (“Call My Agent!”), Elie Semoun (“Ducobu 3”), and Jorge Calvo (“The Man Who Killed Don Quixote”). It also appears as if some acting newcomers will join the cast, so it’ll be interesting to see what they manage to do alongside such veterans.

The plot description for “Stuck Together” will hit far too close to home for everyone who’s had to live through the past 18 months. The movie kicks off in Paris, France, where people with the means to do so have fled the city to spend time in quarantine in the countryside. However, seven different families who happen to be in the same building are stuck with one another for the time being. It’s going to be a long three months …

Throughout the journey, they go through every emotion imaginable, from fear to joy. At some points, they’ll be at each other’s throats, and other times, they’ll learn how important it is to have a community you can fall back on in times of trouble. These people probably wouldn’t have grown close without the pandemic, so even though there were plenty of reasons to be scared, there’s a bright light at the end of the tunnel.

The virus will go away eventually. But the lessons we’ve learned throughout all of this hopefully will stand the test of time.