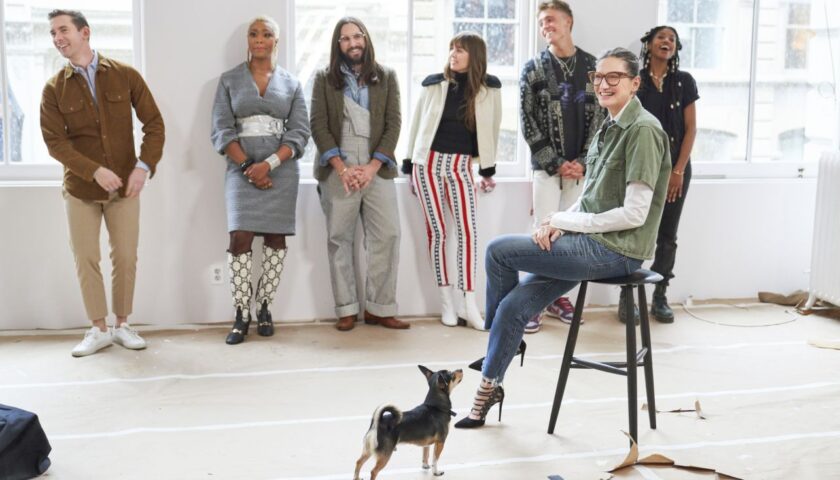 Jenna Lyons walking down a street in New York’s Soho Distric, wearing her signature oversized glasses and pants that look like a deconstructed Muppet.

In each episode, Lyons and DeFord are hired for an interior design challenge; in the first episode, she’s hired to redesign the stark entryway and living room of a friend’s brownstone. To get help on the two-week project, the pair audition four applicants to see if they can work on the project with her. Part of the audition is a clothing design challenge, which in this case is to make the basic outfit of blazer, button-up shirt and slacks more interesting.

Two of the four applicants are chosen, and they’re given the challenge to figure out how to make the entryway practical but visually interesting, without damaging the mural Jenna commissioned for the wall leading to the stairway. The rookie stylists — Alon and Sarah Kate — have opposing styles and clash a bit, but they make something coherent for the entryway. The problem is, it’s not practical, and Jenna gently tells them so. They help Jenna finish the project and she determines if the two of them will participate on future projects with her nascent company.

One of the things that we wondered about while watching Stylish With Jenna Lyons was what exactly kind of show it was. Was it an interior design show, where Lyons is going to take the design knowledge she learned by styling J. Crew’s stores and put it to practice in people’s homes and offices? Is it a reality competition show, where one or more of the young applicants to her team will permanently make her staff? Or is it a fashion design show, where Lyons uses her decades of experience designing and styling J. Crew’s lineup and honing her own bohemian style?

The unfortunate thing is that it’s all three, and none of the elements get enough time to make any kind of impact. We get that Lyons and her bespectacled, Brooklyn-inspired fashion sense had become so iconic that she even had a role on Girls, and we get that her design skills are multifaceted. But what that makes is a disjointed show that doesn’t showcase her eye at all, because the whole design process is being rushed through.

This also feels like the wrong show for right now. It was initially conceived as a TNT project shortly after Lyons left J. Crew, and — like most shows of this kind — was filmed pre-pandemic. But it brings up a too narrow, too-New York, too-white, too-wealthy image, sort of what we saw on the scripted side with The Undoing. That aesthetic might have been a hard sell pre-pandemic, but $4,000 murals on walls are an even tougher sell when people are sick, out of work, or shutting down their businesses.

Another problem is Lyons herself. Her personality is of the somewhat subdued, quirky, nerdy variety. That personality works in interviews, and among her clients and friends, but in a reality series that is supposed to enter her life as well as her new business, it’s hard to design a show around. DeFord has enough personality for both of them, but when the person whose name in the title isn’t generating a lot of moments with her own quirks, that’s a problem.