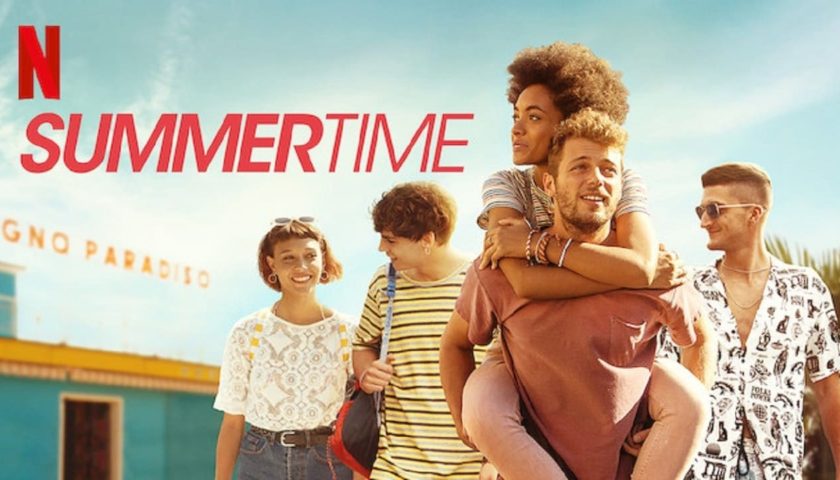 “Use your words.” I remember one of my sheroes saying that to a stammering 4-year-old decades ago. Here was a woman who’d dedicated her life to preschool education, whom I assisted for several summers, trying to get through to a tongue-tied little boy. The more he sputtered, the more upset he got, unable to express what was frustrating him. That’s not unusual with young children (heck, it’s not so uncommon among adults), but his teacher knew just how to handle the situation, calmly telling the child to channel his emotions into language, so the rest of us might understand.

That simple life lesson — that one can’t properly address a problem until it’s been put into words — resurfaced for me watching “Summertime,” an upbeat, feature-length poetry slam that just might be the most inspirational movie to hit the indie circuit this year. A lo-fi, high-ingenuity collaborative endeavor between “Blindspotting” director Carlos Lopéz Estrada and more than two dozen Angelenos from underrepresented backgrounds — female, black, Latinx, Korean American, queer — this fleet-footed, kaleidoscopic showcase is all about finding your voice so that the world can start to appreciate what it doesn’t know about those it hears from far too seldom.

Set over the course of a single day, it’s essentially “La La Land” meets “La Ronde”: Roaming from Venice Beach to the Hollywood Hills, from Eagle Rock to EastWest Studios, the good-humored group portrait playfully flows from one character to the next in a chain, as each gets his or her 15 minutes (or so) of fame. To connect the links, López Estrada looked to Richard Linklater movies like “Slacker” and “Waking Life,” embracing the scrappy stream-of-consciousness structure, where the camera just kind of hovers, a honeybee eavesdropping on conversations for a while before buzzing off to find someone else of interest.

While the poems are personal, the performers aren’t necessarily playing themselves. At first, the assorted strangers register as stereotypes, as viewers rush to assumptions based on superficial labels. That’s how the human brain works, and that’s why it’s so essential that these young people — each one a complex, multidimensional collection of identities — use their words to share their experience. That’s as true of outwardly flamboyant Tyris Winter, who speaks his mind via Yelp reviews, as it is inwardly insecure Maia Mayor, whose “I Want to Be Good at Something” perfectly summarizes the pressures felt by the social-media generation. In this context, poetry is therapy, wit is wisdom and a prescription for progress is for damaged souls to “rap battle” their demons.

If “Blindspotting” was an ode to Oakland, then “Summertime” is the corresponding hallelujah to L.A., capturing what it means to be alive right now in the City of Angels. It’s a kind of heaven for millennials, but it can be hell at times too. In its good-natured way, the movie provides a snapshot of the city’s many headaches, from gentrification to gender-neutral restrooms, legal marijuana to illicit graffiti, Uber drivers to ubiquitous scooters. More importantly, it offers an alternative to the ridiculous theory that Angelenos from diverse backgrounds don’t interact, but crash into each other just to feel something (as Paul Haggis put it in “Crash”).

It helps that most of the dialogue is delivered in verse (the actors are a mix of volunteers and participants in L.A.’s Get Lit spoken-word teen literacy program). Some rhyme, others don’t — the performers’ means of delivery vary as widely as the expressions contained within, extending in some cases to visual art (a montage of L.A. street murals is a standout) and dance, as in Paolina Acuna-Gonzales’ hilariously choreographed femme-powerment poem, “Red Lipstick.”

The fact that a handful are presented as songs drives home the notion that what López Estrada is doing here has its roots in the musical form. Not to tarnish “Summertime” by comparison, but the model isn’t so different from that of “Cats”: The film essentially cycles through a cluster of characters, giving each the spotlight long enough to share insights about their lives, en route to a big party at which the characters are encouraged to defy time and “fly like the ground is on fire.” The fact that each of the characters is delivering his or her own text solves the sameyness problem of a tuner in which one person pens all the lyrics, keeping the viewing experience fresh while making room for many voices.

Amid all the ways that “Summertime” inspires, most exciting is the idea that López Estrada continues to demonstrate (as he did in “Blindspotting”) that going forward, spoken word can work on screen as musical numbers have for previous generations. And sometimes, it can be both at once. To wit, the movie opens with an acoustic guitar ballad from Olympia Miccio on the Venice Fishing Pier and builds — via the rapid rise, and just-as-swift disillusionment, of rap duo Anewbyss and Rah (Austin Antoine and Bryce Banks) — to the catchy end-credits anthem “Hollywood.” As Get Lit leader Mila Cuda puts it in the film, “I know my way around this angel-angst town, all its ins and outs, all its In-N-Outs.” So does “Summertime,” giving two dozen of those precious spirits the space to spread their wings, to use their words.