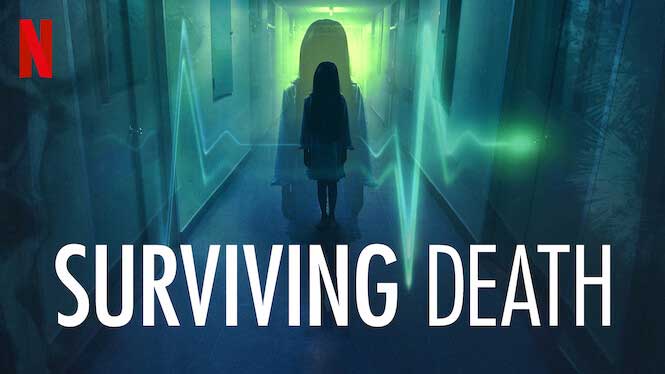 Surviving Death, a docuseries directed by Ricki Stern (Surviving Jeffrey Epstein) based on a book by Leslie Kean, examines different ways people have experienced the idea that death isn’t the end of life. Whether it’s the millions who have had near-death experiences (NDEs), mediums who claim to talk to the dead, the idea of reincarnation, or people who see signs or actual people from the great beyond, Stern looks to take these phenomena seriously, taking a journalistic view of the study of the afterlife.

The woman kayaking is an example of Stern’s journalistic approach, talking to people who have had these experiences who might not have previously believed in these concepts. Mary Neal, an orthopedic spine surgeon, had a near-death experience in 1999, pinned underwater after accidentally kayaking over a steep waterfall.

She had drowned, and had stopped breathing for over 30 minutes, and the NDE she had was vivid, with colors she had never seen before, with the warm embrace that many have reported, and the overwhelming feeling of belonging and of time collapsing and expanding. As a doctor, she was never inclined to think of consciousness as anything but something bound by the physical status of the brain. But after her experience, things have profoundly changed.

We hear a lot of similar — but not the same stories — in the first episode, which is about NDEs. We also hear from experts, like Dr. Bruce Greyson from the University of Virginia’s Division of Perceptual Studies, who are constantly seeking to define the science behind NDEs and other concepts that expand the definition of consciousness beyond the physical human body. Again, they talk about these things in scientific terms, expressing both the commonalities and differences they’ve seen in millions of accounts of NDEs, but also express why they think the prevailing scientific theories about them are wrong and how frustrating it has been trying to make these experiences jive with what they know scientifically.

No, I’m more interested in hearing from scientists or other non-believers who have been profoundly changed by what they went through. Surviving Death takes that tack, and it’s a much more interesting show because of it. Not that it takes a skeptical approach, but Ricki Stern tries to find as many scientific viewpoints as possible, at least in the NDE episode. These experts don’t try to explain the unexplainable; they do relate that these studies have changed how they view things, even if there still isn’t hard scientific fact behind their change in viewpoint.

I’m a little more worried about the two-part examination of mediums, a profession I’ve always been skeptical about. To me, they work on generalizations and read nonverbal cues from the people they give “readings” to. But I’m hoping they take an objective, journalistic and scientific viewpoint with this topic, and the others, as well. Not that it may sway your opinion, but taking that approach will help viewers open their minds and pay attention instead of dismissing the people interviewed as “crackpots” or “religious nuts.”

Production values also help, not only with the scenes in the here and now. Stern does a good job displaying the visions the people who have had NDEs recounted, making something the viewer something they can get lost in while the people are describing their experiences.