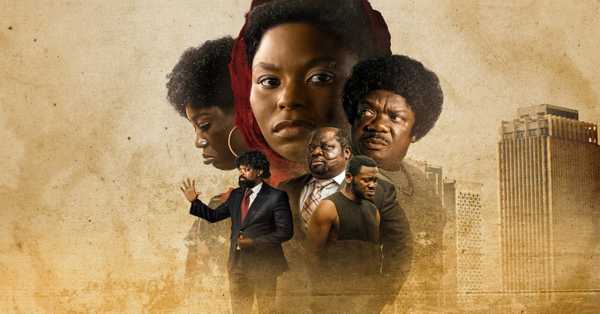 Eniola Akinbo isn’t quite the prominent name in mainstream Nigerian music that many probably would have expected her to be by now. Popularly known as Niyola, her musical apex mountain was pretty much in the mid 2010s, but she couldn’t quite stay at the forefront, and has dwindled from mainstream memory in the recent past. So, seeing her make a mainstream starring appearance is one thing, seeing her playing a starring role in a movie, as she does in Swallow, is a different and more fascinating case entirely.

Swallow is based on the book by Sefi Atta of the same name, and represents another risk – or at least, unorthodox casting choice – from director Kunle Afolayan, who did similar with Temi Otedola as lead star in Citation back in 2020. Casting Niyola to star as Tolani Ajao in this pic is also a big call, one in which the outcome would definitely divide opinion.

Swallow starts off Tolani doing a storytelling voiceover – well after she’s first seen returning to her hometown in disconsolate manner. This is an area in which the actor doesn’t quite work for the role; she doesn’t quite have the vocal and storytelling panache to go with the story as it moves. But to her credit, much of Tolani’s demeanour is portrayed with genuineness. The taciturn sense of desolation, the show of resignation, and the tells of a character that might explode or implode sooner or later. Those acts definitely resonate with the character and the film.

But as much as it is about Niyola as Tolani Ajao, Swallow also features a cast that includes Ijeoma Grace Agu, Kelvin Ikeduba, and Deyemi Okanlawon. Omotunde Akinbowale, Chioma Akpotha, Kehinde Segun Remi, Eniola Badmus, and Kunle Idowu ‘Frank Donga’ also appear in this Netflix movie.

Swallow is, following the guise of the book, set in the 1980s. The film does try to show that it is in that decade, but with that comes a sense of overkill. Sometimes, elements in the film appear in the film for no reason other than telling us ‘we’re accurate about the 1980s’. Overt newspaper publications that bear little significance to the story, television news channels that don’t say anything, repetitive scenes of fans watching football; all litter the film, and with little purpose.

Yet, its depiction of the 1980s can be picked apart. Not just in terms of what we see; like a wall socket that looks very 2020s. But also, in terms of what we hear, which is the most poignant issue. For all its overt display of being in the 1980s, the dialogue and diction doesn’t reflect that. It’s far too artificial to seem genuine.

Just as telling is the fact that the dialogue on the whole doesn’t work, and neither does the diction. Words are a touch repetitive, conversations in traditional languages lack any flair or flow, and it just feels like it’s going through the motions. There are times when the diction from Kehinde Segun Remi (playing Salako) keeps changing itself. Much of the good bits of the language comes from Ijeoma Grace Agu, who, as Tolani’s friend Rose, is very much the most genuine act of the movie.

Swallow also seems to be reliant on a pay-off at the end. As such, much of this film simply happens without effect. There are too many conversations that have no impact on the plot and the story. Too many scenes that happen and we never make reference to or come back to again. Plus, those scenes are neither significant enough to hold on to, or interactive enough to be memorable. That a lot of acts in this film can be chopped off and little would change is very much a drawback for Swallow. This film goes through the motions, and much of its key points of its entirety, its areas of significance, only really happen in the final half hour.

Yet, the pay-off in itself doesn’t quite work. This is especially because scenes and character actions don’t quite depict things that happen in the film, or more appropriately, scenes that the movie says happen. A loss is suffered at the end, but we neither see how it happens or witness the impact of it.

This film also makes the misstep in terms of the social and economic commentary. The main points of the movie, are pretty much driven by economic hardship, but such was the case that this movie could have done without making commentary on that and still worked. Instead, Swallow doesn’t just do it half-heartedly, it also does it without any real conviction. There’s little economic analysis or even reflection of the consequences of the austerity measures on people. The morsel of moments come from Ijeoma Grace Agu as Rose, but even those lack any concreteness.

Swallow is far too solemn, and too taciturn to work. There’s no intrigue, no tension, and there are no peripheral elements that work well enough to be appreciated. Ironically, the movie makes a big call in terms of its lead cast, but holds back on everything else.