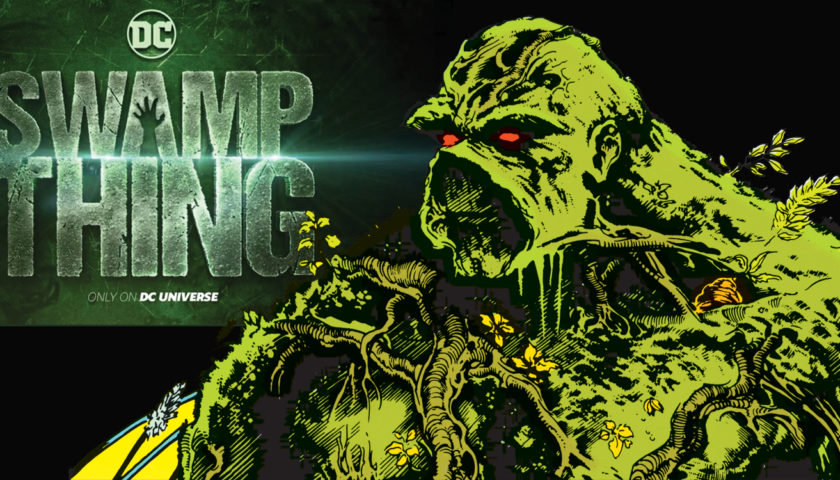 You know what I didn’t even know I really wanted until it arrived in my inbox? A Swamp Thing live action TV series that boasts James Wan (The Conjuring, Aquaman…oh, you know who he is) as one of its executive producers. And yes, we’re getting a Swamp Thing TV series on the upcoming DC Universe streaming service that Warner Bros. will launch later this year.

Swamp Thing will arrive on the DC Universe streaming service in 2019. A graphic shown on screen during New York Comic Con indicated it will likely arrive in July.

Crystal Reed will play the traditional comic book love interest to the titular hero, Abby Arcane. As the official announcement describes the character:

“Smart and caring, CDC Doctor Abby Arcane’s strong sense of empathy puts her at the center of a horrific life-threatening epidemic in her hometown, where she faces emotional demons from her past… while a chance meeting with scientist Alec Holland takes her into a world of horror and the supernatural, and of the elemental creature known as Swamp Thing.”

Abby Arcane first appeared in Swamp Thing # 3, dated March 1973. Besides her medical training and innate psychic powers, Abby is also known for inter-familial conflicts, since she’s the niece of Anton Arcane, Swamp Thing’s traditional archnemesis. Anton, an elderly mad scientist – formerly in service to the Nazi Party – is obsessed with immortality, which leads him to some demented experiments. The Abby character manifested in the Swamp Thing movie series in the notoriously campy 1989 sequel, The Return of the Swamp Thing, played by Heather Locklear. She was later played by Kari Wuhrer on USA Network’s 1990-1993 Swamp Thing TV series.

Interestingly, the Swamp Thing co-starring role will see Crystal Reed make a DC-to-DC transition, since she just wrapped a run as Sofia Falcone on Fox’s Gotham, a role that started as a romantic interest to Ben McKenzie’s Jim Gordon that quickly devolved into her becoming a ruthless antagonist. She came into that role off her 2011-2016 run on MTV’s Teen Wolf.

Jennifer Beals will field a guest recurring role as Sheriff Lucilia Cable, a “tough as nails and pragmatic” head of the local law enforcement who’s fiercely devoted to her son, Matt. However, her ability to defend the denizens of Marais will be tested in unprecedented manner when the town becomes besieged by strange forces.

Maria Sten will play Liz Tremayne, a reporter for the local paper and bartender at her father’s roadhouse who’s a close childhood friend of Abby Arcane (Crystal Reed). She’s described (via Deadline,) as having a “no-nonsense attitude” that contrasts with “deep compassion for her friends and family.” Her journalistic endeavors center on exposing a threat to her hometown.

Of course, that leaves us with the casting of the titular Swamp Thing himself, Alec Holland.

That Hashtag Show had profiles of the two lead characters, describing the Holland role as requiring, “a 30-something wise man, with a hot temper and a big passion for his work as a researcher for the Sunderland Corporation.” Alec’s own research into the cause of the “Houma flu” will lead to his transformation into Swamp Thing.

“When CDC researcher Abby Arcane returns to her childhood home of Houma, Louisiana, in order to investigate a deadly swamp-borne virus, she develops a surprising bond with scientist Alec Holland — only to have him tragically taken from her. But as powerful forces descend on Houma, intent on exploiting the swamp’s mysterious properties for their own purposes, Abby will discover that the swamp holds mystical secrets, both horrifying and wondrous — and the potential love of her life may not be dead after all.”

So, not only does this sound great, it sounds like the kind of show that could open the door to all manner of other weird and supernatural corners of the DC Universe. Drop me off at the House of Secrets. Let Matt Ryan cameo as John Constantine (hell, Constantine first appeared in a Swamp Thing comic). Introduce Dream and the rest of The Endless. I don’t care. Do it all. I’m here for it.

The first description for Abby Arcane (which ultimately went to Crystal Reed,) describes a character “who returns to her hometown to investigate the “Houma flu.” Abby has a “tragic past” (comic fans can guess what it is) that chased her out of town in the first place, and she struggles with drug addiction. They also mention her ex-boyfriend “Matt” who is almost certainly Matthew Cable, another character from DC’s essential run of Swamp Thing comics that began with Len Wein and Bernie Wrightson and ran all the way through the Alan Moore years.

This is far from Swamp Thing’s first foray into live-action. Wes Craven’s 1982 Swamp Thing movie is a legit cult classic, although its sequel, Return of the Swamp Thing, is less so. There was a syndicated TV series that starred big screen Swampy Dick Durock that ran for three seasons. It’s better than you’ve heard. The short-lived animated series, on the other hand, is not. Something tells me that whatever DC Universe is cooking up will be better…but I REALLY hope they go with the “man in suit” approach.

Soon we are coming with full Review…