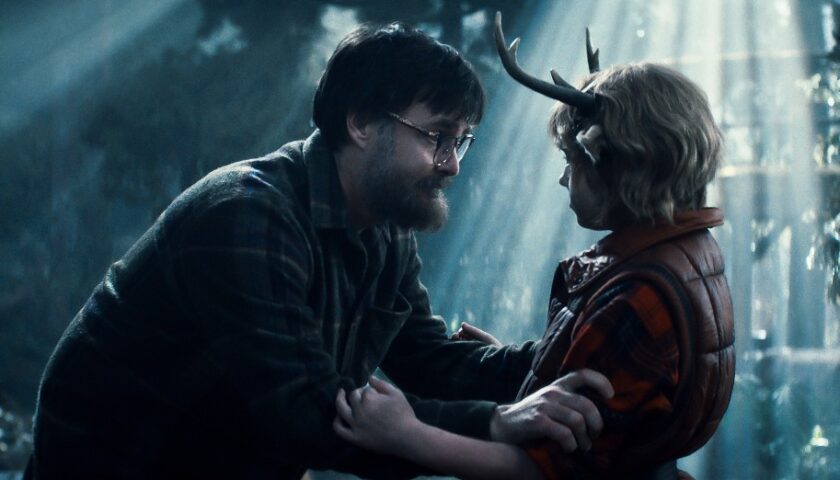 Some predisposition toward the saccharine is necessary to properly consume Netflix’s new fantasy Sweet Tooth — I mean, it’s right there in the title — but there’s great pleasure in reporting that for most of Jim Mickle’s adaptation of Jeff Lemire’s Vertigo comic, a precarious balance is handled with real deftness. Emotionally and geographically, this is a show with real epic scope, and it earns the laughter and occasional tears that it wrings from the audience thanks to a real and unquestionable, well, sweetness.

Sweet Tooth begins 10 years after an event the characters refer to as The Great Crumble, a possibly connected series of occurrences that included the global spread of a deadly virus and the mass birth of so-called hybrids, children born with a mixture of human and animal parts. The combination of global tragedy and undermining of confidence in the future of pure-blooded humanity tore society apart in ways these first eight episodes only begin to depict.

Living on the outskirts of civilization, in a cabin in a natural preserve, are a father (Will Forte) and the deer-boy he calls Gus (Christian Convery). The child has heightened senses, furry ears, growing antlers and, thanks to the isolation of his upbringing, no real sense of the outside world. When that outside world brutally intrudes, Gus begins a quest to find his unknown mother, accompanied across a very pretty post-apocalyptic wasteland by a former football star turned wandering vigilante (Nonso Anozie’s Tommy Jepperd) — one of those crusty figures who claims to hates kids, but will surely experience a change of heart as the story progresses.

Simultaneously, but united by ongoing narration from James Brolin that I found to be one of the show’s biggest weaknesses, we meet several additional characters including Adi Singh (Adeel Akhtar), a doctor determined to help his ailing sister (Aliza Vellani) at any cost; reclusive former therapist Aimee (Dania Ramirez); and the young woman known only as Bear (Stefania LaVie Owen), leader of a cadre of orphaned teens with mysterious objectives.

A quick skim of the plot should reveal that while certain elements in Sweet Tooth have a distinctive quality, it’s a very traditional story within the folkloric realm. With no trouble at all, you’ll spot elements of The Wizard of Oz and Peter Pan and half of the Disney roster. The expansive backdrops provided by shooting in New Zealand — so many verdant fields and perilous chasms — make Lord of the Rings comparisons inevitable as well. From there, you can see dollops of whatever your favorite road sagas are with winsome kids and gruff, reluctant guardians, whether it’s Lone Wolf and Cub or Willow or, fittingly, The Road or Mad Max. It’s all packaged from a child’s perspective like a Spielbergian yarn from that moment in the ’80s when the expectations for young-skewing entertainment didn’t necessarily require exclusive juvenile pandering; Sweet Tooth is awash in sadness, is occasionally scary and people say “shit” at least three times, if that’s the kind of thing that freaks you out.

There’s no doubt that the pandemic set-up will be another freak-out factor for some Sweet Tooth viewers, just as it will be for FX’s Y: The Last Man and just as it presumably was for Amazon’s short-lived remake of Utopia and the most recent adaptation of The Stand. Unlike those last two, though, Sweet Tooth seems to represent a transition into post-pandemic optimism of sorts. It’s less about piles of corpses and patients expelling phlegm than a wee deer-boy who really, really enjoys eating syrup.

The tone is beautifully set in the pilot, one of three episodes directed by Mickle, who makes an astonishingly fluid transition from his hard-boiled roots in SundanceTV’s Hap and Leonard and features like Cold in July. Forte, veteran of his own previous post-pandemic survivor’s journey with The Last Man on Earth, is exceptional in this rare opportunity to foreground his heartfelt hangdog charm. And as 10-year-old Gus, Convery gives a performance of appealing openness that practically demands you leave your skepticism behind and embrace the wonderment. The world of the series opens up after the first episode, yet the initial 53-minute woodland two-hander and the tone set by Forte and Convery — assisted by a hair, makeup and effects team in realizing the look of these hybrids — facilitate taking the premise and Mickle’s fantastical approach seriously.

By the end of the pilot, you’ll know if this is a journey you’re able to go on. If you’re rolling your eyes and snorting, then Sweet Tooth just isn’t for you. If you keep going, it’s easy to warm to the growing ensemble and the different pieces of this world that are slowly being exposed. Anozie has the right world-weary exasperation and Owen the right spry rebelliousness that when they start bumping heads with each other, and with Convery’s endearing innocence, it’s a winning dynamic. Akhtar and Vellani’s storyline adds stakes and moral complications, while Ramirez adds her own shade of pluckiness.

Even though you know that eventually the storylines are going to intersect, the back-and-forth parceling of the non-Gus plots isn’t always as smooth or considerate of overall momentum as it should be — though I was absolutely interested in the supporting threads, which isn’t always the case.

I’m also not sure that Sweet Tooth is quite as thematically coherent as it needs to be. The underlying message about accepting difference can be applied to race or gender identity, and that plays with effective simplicity. The “this is what happened because humans weren’t respectful enough of the Earth” environmentalist undercurrent is perfunctory, but rarely overplayed. I was less convinced by the show’s thesis about scientific exploration, and there’s a whiff — not pervasive, but more than my preferred amount, which would be “none” — of vaccine caution that I’m guessing wasn’t completely intentional and definitely plays differently now than it might have when production on Sweet Tooth began.

But if you can withstand the early earnestness, the lack of subtextual consistency shouldn’t be a problem, and so much of Sweet Tooth lands exactly on its desired terms. The performances are sturdy, the action scenes thrilling and Jeff Grace’s score conveys the right notes of adventure and melodrama. Despite lacking a Peter Jackson-level budget, the effects team executes the story’s magical elements with “Awww…”-inducing aplomb, especially on one secondary character who could have merchandising appeal if the show sticks. And I hope Sweet Tooth sticks, because the first season is more effective than I would have imagined and this is a world with many more stories to tell.