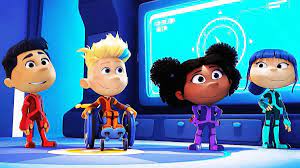 DreamWorks Animation and Mainframe Studios are back with an all-new animated series, perfect for kids and families of all ages. While “Team Zenko Go” is technically aimed toward younger kids, this fun new animated series offers sweet messaging for all.

Each episode the Team Zenko Go team gongs it up and heads out on a mission to improve the lives of someone in their town. The team performs “zenkos” (good deeds/random acts of kindness) unbeknownst to the recipients of their deeds. The four team members—Niah, Ari, Ellie, and Jax—work together and complement one another’s skill sets.

Ever supportive and creative in their missions, this diverse cast of characters use teamwork to get the job done and no one person ever outshines another. The 12 all-new episodes from the first season of DreamWorks Animation and Mainframe Studios’ Team Zenko Go premiere on Netflix March 15, 2022.

Niah, Ari, Ellie, and Jax are members of Team Zenko Go, a secret squad of stealthy do-gooders who harness the art of distraction to perform anonymous acts of kindness for the unknowing residents of Harmony Harbor. These four kids have been taught by their mentor, Auntie Yuki, a special set of skills that allow them to do good deeds (or Zenkos) for others, making their town the happiest in the world. Like Auntie Yuki says “when we help people without them knowing, they start to think that the world is just a nicer place.”