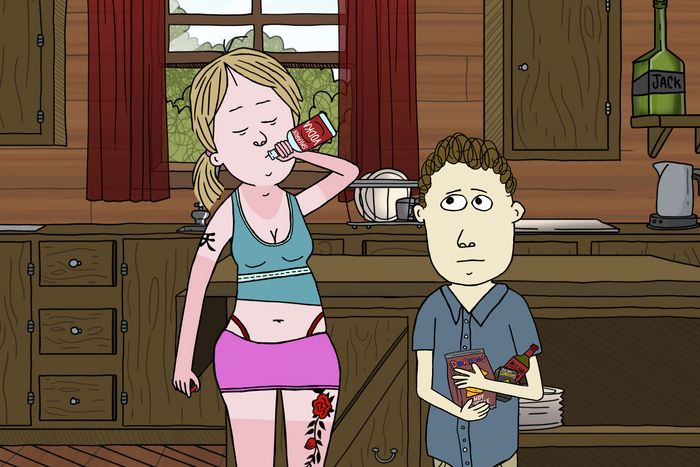 The easiest way to review Steve Dildarian’s new HBO Max animated comedy would simply be to say that if you were a fan of Dildarian’s The Life & Times of Tim, you’ll surely enjoy Ten Year Old Tom.

Unfortunately, not only was The Life & Times of Tim something of a cult curiosity when it aired on HBO, but — and prepare to feel old, Tim fans — it’s been nearly a decade since that series ended. And it only JUST arrived on HBO Max.

So I guess I’ll start from scratch on Ten Year Old Tom (sincere apologies to any copy editors on the lack of hyphens in the formal title). It’s a dryly charming, maturely childish series about kids but not for kids, one that may expand Dildarian’s core pack of devotees.

Our hero here is Tom (Dildarian), a remarkably average 10-year-old at a remarkably average New Jersey elementary school with a mother (Edi Patterson) who’s loving but nonetheless coping poorly with the abrupt departure of Tom’s plumber father. Tom’s friends include his school-bus buddy Nelson (Byron Bowers), a hyper-mature future CEO, and the equally ambitious Dakota (Gillian Jacobs), whose mother (Jennifer Coolidge) particularly dislikes Tom. A bassoonist in the orchestra of life, Tom is constantly being used as a juvenile pawn by various adults, whether it’s the school principal (Todd Glass), the burnout bus driver (Ben Rodgers) or the school’s all-purpose teacher, extracurricular adviser and chaperone Mr. B (John Malkovich).

With two stand-alone incidents per episode — as in The Life & Times of Tim — ill-fated misadventures ensue, ranging from cheating in a regional spelling bee to various attempts to earn money and a class trip to Boston for a baseball game. Consistently, nothing goes well for Tom.

The thing you have to understand about Dildarian’s core characters — and Tom could be a younger version of Tim, one who eventually changed his name after a typo that he was too unassuming to correct — is that they’re fundamentally well intentioned, with a reasonable sense of right and wrong, but they’re generally incapable of foreseeing consequences of any kind. So a typical situation for Tom involves an adult authority figure urging him to do something morally wrong for one reason or another, Tom suggesting it’s probably not a great idea and then going along with it anyway, for want of a successful counterargument.

That’s the key: Tom (like Tim) isn’t brilliant, but he isn’t an utter innocent either. He’s just a simple guy with ample qualms but limited resistance; he knows enough to say that a bad idea is a bad idea, while lacking the wherewithal to raise more than a quizzical objection. Perhaps that’s why Tom so frequently seems to be gazing into the camera, waiting for somebody to step in and prevent the inevitable downward spiral.

The Dildarian tone and visual aesthetic — he directed all eight episodes sent to critics and wrote or co-wrote most of them — is dry to the point of parched. It’s a pervasive deadpan, yet it’s never sarcastic or ironic. Tom, like Tim, is wholly earnest and sincere. Even when he’s about to do something everybody knows is stupid, he’s as perplexed as viewers might be that nobody else is providing the voice of reason.

You’ll cringe frequently watching Ten Year Old Tom, but the great pleasure of the mini-episode structure, with its loose continuity, is that you don’t need to worry that the well-orchestrated farcical elements will persist for too long. It’s one of several things that keep the Dildarian worldview from feeling like Curb Your Enthusiasm, a more darkly pitched treatment of unintended consequences.

Having this incarnation of the Dildarian character be a grade-schooler imposes a certain logic on his choices and on the way the older characters are using him. It’s easier to be sympathetic toward him, because he’s a victim of adults with their own agendas, while Tom’s agenda tends to be simpler — helping to pay the electricity bill, or avoiding a repeat of the school-play incident last year, when he puked and pooped at the same time. Does this make Ten Year Old Tom less funny than The Life & Times of Tim? Perhaps, because the absurdity is less extreme, and the depth to which situations can descend is limited. But there’s also a sweetness that Life & Times of Tim couldn’t always achieve.

Beyond Dildarian, whose plaintive monotone is surprisingly varied, the vocal cast here is a delight, starting with Malkovich, who would be chewing on all the scenery were it not animated. Patterson is coarse-but-loving, Glass is authoritative-but-pathetic, and the repartee when Bowers, Jacobs and Dildarian interact in childish form is wildly likable and funny. Standout guest voices are led by Mark Proksch as Dakota’s philandering dad, David Duchovny as a disaffected ice cream man, George Wallace as Nelson’s successful father and Timothy Simons as a famous yearbook photographer.

Some stories build to a high level of chaos, others maybe fizzle out (the Fenway Park episode was probably my biggest disappointment). Some just generate smiles and others produce steady laughs (the seventh episode, involving skipping school and an election, is doubly brilliant). Ten Year Old Tom is well worth checking out.