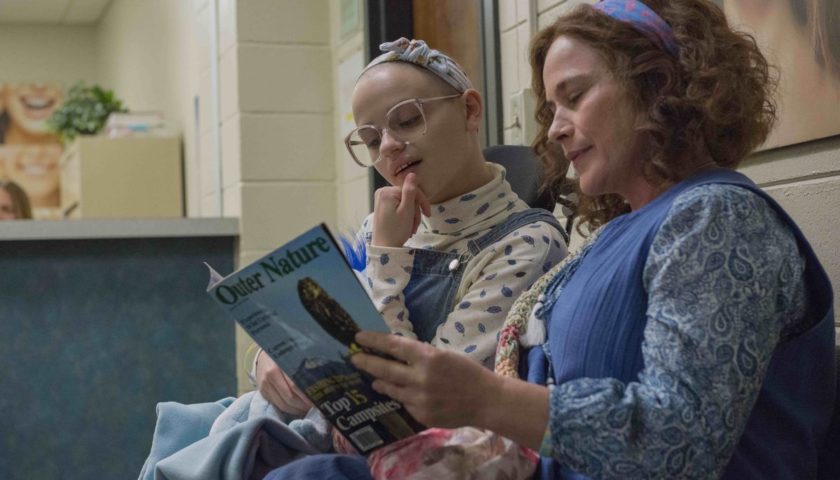 Review: Just months after playing a heavily accented woman enticed to commit crimes by her tragic pathologies in “Escape at Dannemora,” Patricia Arquette is doing the same thing — just with a different accent, different crimes, and different pathologies — in the new Hulu original “The Act.” Both Showtime’s prison-break drama from last year and Hulu’s newer offering have similar mandates, spending the length of a season looking into a single crime story and excavating from it insights about character.

And there’s plenty of character in this story, about a mother whose apparent Munchausen by proxy keeps her daughter a prisoner and eventually engenders bloody revenge. Arquette’s vivid performance in particular leans deliciously far into the show’s general lack of insight or commentary about the crime it depicts. “The Act,” contrary to a general trend of finding the nourishing nugget at the center of famous scandal, has little to say but a general expression of wonderment at quite how strange a place the world can be. The lack of didacticism — and the show’s commitment to representing a story with relative fealty to how it occurred and willingness to push past boundaries of taste — comes as a sort of relief.

Arquette’s Dee Dee Blanchard helps her daughter Gypsy (Joey King) through all sorts of ailments, ones Dee Dee seems to stop just short of enjoying for how they make her presence necessary. But no one in her life asks too many questions: Gypsy’s father is out of the picture, and her bald head and feeding tube seem like a potent enough signal that her health is poor. After the pair relocate to Missouri, Gypsy’s desire to experience life outside of her mother’s protective gaze — and her sense that she actually does have enough vigor to live something closer to a normal life than her cloistered upbringing — push mother and daughter closer and closer to conflagration.

The details of “The Act” will be known to many — the story has already been the subject of an HBO documentary and a widely-read BuzzFeed News article, whose author executive produces “The Act.” And yet the approach, here, is engagingly lurid, engaging with the remarkable oddity and pain of the story rather than reaching to make points that the story doesn’t serve. Other entries in what’s become an increasingly robust genre of season-long re-enactments of recent history — from “Dannemora” to FX’s two “American Crime Stories” — make, with varying degrees of success, big points about society. Here, instead, we get Patricia Arquette decompensating in the juiciest of ways, asking for her “sleepy baby” pills as she tells her pet guinea pig, “I’m your mama now”; her willingness to be deeply weird feels more welcome than ever. And King lends shading and complexity to a young woman who’s evidently learned that smiling stoically is the only way to get what she wants from a mother who romanticizes her ailments. As Gypsy, she comes most truly alive when out of her mother’s eyeline, a process of awakening that’s both tragic, given how far Gypsy is from real empowerment, and quietly thrilling. Her performance helps answer the question of why the show exists (a real one, when it comes to the depiction and dredging up of human suffering): King is bringing soul and life to a young woman whose story seems beyond our comprehension.

“The Act’s” tendency to lean into its inherent drama does mean that certain points get made over and over; because there’s no real modulation of tone, we see, for instance, Arquette sharing ironic truisms about the meaning of motherhood with neighbor Chloë Sevigny one too many times. But generally, “The Act” nails what it’s going for — a grotty, nasty, poisonous fable whose punch comes from the fact that some version of it really happened but that would be compelling regardless. The series’s best shots are exteriors of the home where Gypsy and Dee Dee torment one another, shot from below so as to appear looming and menacing and, later, from above, so as to resemble a dollhouse whose inhabitants are guided by some force beyond their understanding. They’re shots a conventionally better show wouldn’t include: Too proudly goofy, too baroque. On this slice of American oddity, though, they end up feeling right.