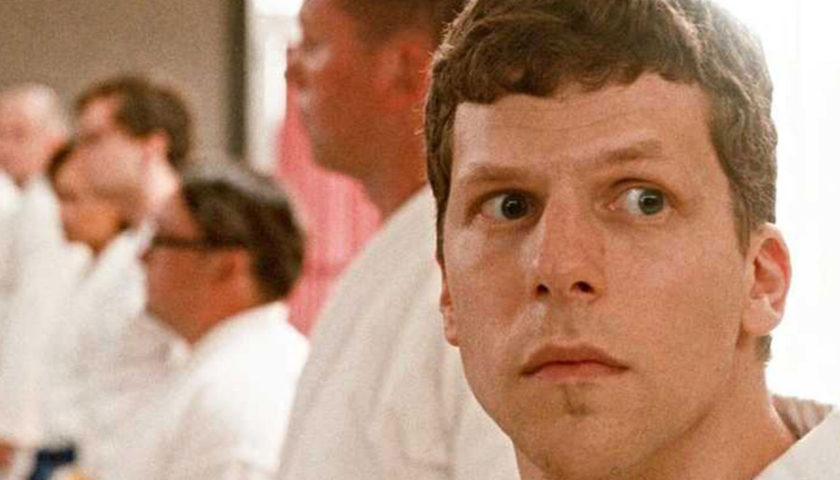 Dark, sinister, and disarmingly hilarious, “The Art of Self-Defense” tells the story of how someone like Casey learns to stand up for himself by signing up for karate classes. But it’s hardly that simple: Once enrolled, he starts to feel more confident in his personal life, even as he begins to realize that something bizarre is going on behind the scenes of the dojo: violent night classes for select students, weird mind games, and broken bones. Engineered to earn a cult following by writer-director Riley Stearns (“Faults”), this singular black comedy balances off-kilter humor with an unexpectedly thriller-esque undercurrent, to the extent that audiences will find it tough to anticipate either the jokes or the dark, “Fight Club”-like turn things eventually take — all to strikingly original effect.

Casey Davies is played by Jesse Eisenberg, and that’s probably all you need to know to picture the sort of protagonist Stearns has in mind — except that instead of limiting the “Social Network” star to his typically nervous, introverted screen persona, the movie treats those mannerisms as a protective outer shell for the skittish character’s unpredictable but deeply repressed actual identity. For the first 45 minutes or so, Eisenberg plays up Casey’s social awkwardness, standing apart from his co-workers in the break room, or silently judging a couple of tourists at the generic local diner.

After the senseless late-night attack, however, the painfully shy young man — who works as an accountant — walks into a gun shop to buy a weapon. On the way home, he happens to pass a karate studio, then steps inside to observe. Calm and self-assured, the instructor (Alessandro Nivola), who insists that his students call him “Sensei,” represents the kind of man Casey wishes that he were. And so he decides not to get that gun after all, enrolling in Sensei’s classes instead. At first, he lies about what drew him there, but after progressing beyond his initial weaknesses, Casey admits, “I want to be what intimidates me.”

Bingo! “The Art of Self-Defense” may be presented as an absurdist satire, but like the best American comedies — from the workplace ennui of “Office Space” to the competitive one-upmanship of “Talladega Nights” — it doubles as a keen critique of our national character. What American male can’t identify with the feeling that he’s not being butch enough, that all the other dudes innately understand some secret code of masculinity — from crotch-scratching to crushing beer cans on their foreheads — that doesn’t come naturally to you?

How many of what eventually develop into our core habits and hobbies stem from such an unspoken insecurity? And how much of that process are we even aware of? “The Art of Self-Defense” brilliantly focuses on this near-invisible form of peer pressure — whose catchy new label, “toxic masculinity,” tends to put its culprits on the defensive — and explores how it motivates our own social development. Plenty of movies have looked at the impact of such social conditioning on children, preaching the same toughen-up, stand-up-to-bullies messaging that compels Casey to take karate in the first place. But Stearns skews older, depicting how a 35-year-old office dweeb tries to make up for whatever machismo he didn’t get from his parents, the same way he might try to absorb French via learn-in-your-car CDs.

As you’ve probably surmised, the film doesn’t take place in the real world, but rather some proximate parallel dimension — not so different from the drab, solitary version of Anywhere, USA, evoked by Edward Hopper paintings or the writing of Tao Lin (especially “Eeeee Eee Eeee”). Crafting flat, deliberately stilted dialogue for his characters, Stearns encourages his cast to deliver their lines in a kind of affectless monotone. This strange tactic underscores the basic challenges of human interaction while emphasizing the intricate power games between so-called alpha and beta personalities (as psychological mind games go, it’s a subtler take on the agonizing first act of “Full Metal Jacket”).

With its clear-cut hierarchy, the karate studio — like boot camp — makes for an ideal microcosm in which to explore this dynamic, and Stearns introduces a couple of sympathetic fellow students (Imogen Poots as Anna, the lone female in the dojo, and David Zellner as Henry, its least aggressive student) whose clashes with Sensei ought to be troubling for Eisenberg’s character, even as they offer him a chance for advancement. But there’s a world of difference between finding the confidence to stand up for oneself and the kind of hostile aggression that emerges once Sensei promotes his new protégé from white belt to yellow. Casey doesn’t want to remove his yellow belt in public, and who can blame him? Wearing it makes him feel powerful for the first time in his life. Once you’ve discovered “The Art of Self-Defense,” you won’t be the same either.