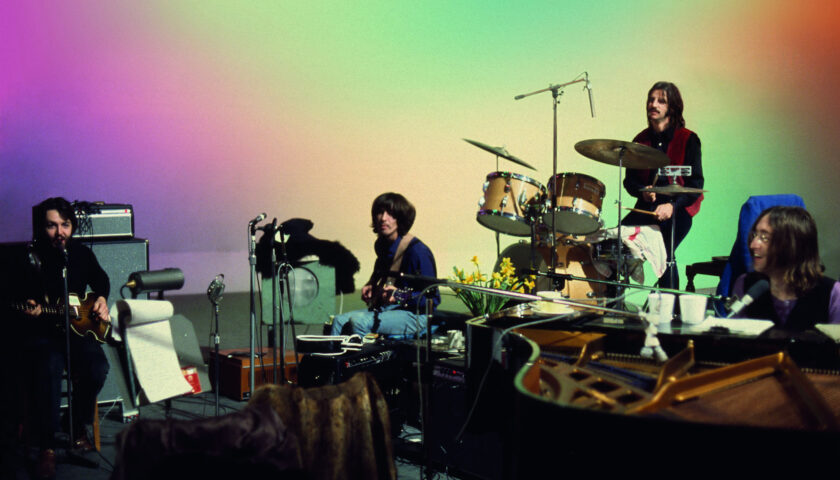 There’s a reason for an 8-hour documentary about the recording of The Beatles final release. Back when, there was such a ruckus and hurled allegations from all quarters: the band members, the critics, the (mostly) stoned fans and interested parties. Today, all of that seems like manufactured craziness, but Peter Jackson recreated what may have happened, offering a correction of what people erroneously believed as a clash of inflating egos and tantrums caused by (1) Yoko Ono’s presence and (2) the pulling apart of the group by domesticity. In fact, Jackson lets us witness the growth of 4 talented people ready to move on with their drive towards solo careers. The group was just too confining, the mind-meld between McCartney and Lennon too dominant for Harrison and Starkey. Seeing McCartney and Lennon create–almost wordlessly–is riveting, and watching Harrison’s resentment over being ignored or dismissed, painful. But there’s a tight deadline for the project. Starkey is under contract to begin a movie at month’s end, and the planned project includes an album, a TV special, a film plus a live performance in just 3 weeks. So time puts enormous pressure on getting the work done.

The Beatles were a phenomenon unlike anything seen before primarily due to a growing interconnectedness of media that spread news (or rumor) with lighting speed. Reporting the most mundane morsel of what was going on with the group was its own industry. And, in the absence of any fact, the media could always make something up. Critics who were becoming a separate discipline, lying in wait to topple the successful, so they could gain respect and access…and influence. And The Beatles were a primary target for the mill. “Let It Be” was poorly received by the critics which today seems laughable. Take a dart and throw it at the eclectic track list, and you’d score an example of brilliance in both live recording, performing or writing. Sometimes all three. Phil Spector’s odd postproduction edits only added to the critical fodder. Today, those additions make little difference. And, as McCartney remarks in the course of the film, Yoko Ono’s presence–and any objection to it–also is inconsequential. It’s too bad she didn’t have the awareness of what her constant presence would give to her detractors.

I wouldn’t urge anyone to see this film due to its length. Writing songs and rehearsing them is a repetitious process. You’ll either be fascinated or bored stiff. But the restoration alone is a gift; the amount of time we get to spend watching the recording process of geniuses of the 20th Century is a privilege. The music still thrills and influences. Whether you want to stick around and watch how it was created, under self-imposed dire pressure is a personal choice.

Part 3 is the most accessible for the casual viewer. It contains things like a young Heather McCarthy upon hearing Yoko Ono’s, unique wordless, guttural singing deciding to mimic her. We also get to move out of the claustrophobic confines of the yet-to-be-completed Apple studios and hear a relatively unrehearsed, rough shod performance (some used on the album). And the surprised inhabitants and passersby on Seville Row astonishment to hear The Beatles finally performing again. The constabulary are less impressed.

It can be argued that the Beatles changed society. Whether you want to say they simply led what was already underway or did it single-handedly is an open question. So, Peter Jackson with “The Beatles: Get Back” did a service by correcting a record. Yes, there were struggles and resentments inside the group. But the real culprit in their split was their maturing talent and a need to express beyond the four as a group. At the time, the break up was devasting to the public and apparently to the group itself; but watching the film today, we can celebrate that they were released to not only express themselves but to give even more to their legacy.