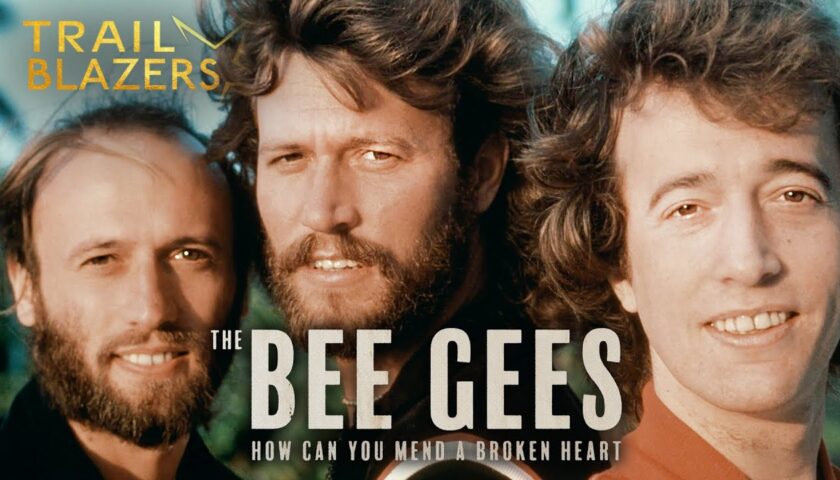 The Bee Gees: How Can You Mend a Broken Heart 2020 Movie Review Poster Trailer Online

Greetings again from the darkness. “Whether you’re a brother or whether you’re a mother, you’re stayin’ alive” … that instantly recognizable lyric is a bit ironic when it comes to the fascinating story of the Brothers Gibb – a story of love, ego, success, and tragedy. Director Frank Marshall delivers a heartfelt and quite detailed chronicle of the familial music group that experienced the highest highs and lowest lows. The foot-tapping “Stayin’ Alive” plays over the opening, but we soon cut to a 1979 concert in Oakland where the Bee Gees are performing the film’s title track. If somehow you are unfamiliar with their music, this beautiful performance will clue you in quickly.

Flash forward to 2019, and we hear from 73 year old Barry Gibb as he dolefully states, “my immediate family is gone”. Going back to their childhood, we see 5 year old twins Robin and Maurice joining with older (by 3 years) brother Barry to perform live shows. Contrary to popular belief, the boys were born on the Isle of Man, and only later did the family relocate to Australia. Robin’s tear-jerking voice perfectly blended with Barry’s power (and later falsetto), while Maurice was a natural harmonizer. Barry promised his younger siblings they were “going to be famous”. It’s a prediction that certainly came true.

Along the way, we hear recollections from musical luminaries such as Eric Clapton, Chris Martin, Nick Jonas, Justin Timberlake, and Noel Gallagher. Jonas and Gallagher both speak to performing with one’s brothers, and it’s Gallagher who nails it with, “Brothers singing is an instrument nobody can buy.” In comparison, Timberlake’s few comments seem to be included because of who he is rather than what he has to say. It’s noted that early work from the Bee Gees sounded very much like the Beatles, and it was music executive Robert Stigwood who truly recognized their talent and the possibilities of their stunning harmonies. Stigwood would guide them through their career peaks and valleys.

Much is made of how the brothers functioned as “one” while writing and singing, but as often happens, success brought out the egos, and in 1969 Robin quit the group due to his creative clashes with Barry … both wanted to sing lead. It’s interesting to note that Maurice married singer/actress Lulu, who most will remember as the singer on the smash hit “To Sir with Love” (she also appeared in the movie). Not surprisingly, the brothers’ first song after reconciling was “How Can You Mend a Broken Heart?”, which provided some symmetry to their own situation.

The film closely tracks their career, including resorting to performing in small clubs, and their shift in musical styles with 1975’s “Jive Talkin'”, followed by “Nights on Broadway”. The Bee Gees went through a few producers in their career, which likely explains their numerous shifts in style. Arif Mardin was followed by “hippie” Albhy Galuten, who helped create the ‘Miami sound’ and then turn them (like it or not) into disco icons when Robert Stigwood included them in his film and music vision of a little magazine article entitled “Tribal Rights of the new Saturday Night”. The movie, of course, was SATURDAY NIGHT FEVER, and the soundtrack exploded on the scene. Of particular interest here is Galuten’s explanation of how they built/wrote the song “Stayin’ Alive”. It was also around this time when the youngest Gibb brother, Andy, zoomed up the charts with three consecutive number one singles.

Of course all good things must come to end … even if by the end they aren’t so great (“Disco Duck”). Chicago DJ Steve Dahl organized “Disco Demolition Night” at Comiskey Park and the anti-disco movement was well underway. This is discussed from a historical and societal perspective with some particularly fascinating insight into what actually happened that night. Casualties of the movement and the collapse of disco, the brothers once again reinvented themselves – this time as songwriters for such performers as Barbra Streisand, Dionne Warwick, Diana Ross, Celine Dion, Kenny Rogers and Dolly Parton.

It may seem that the Brothers Gibb had more lives than a cat, but alas, tragedy struck numerous times. First to go was Andy at age 30, followed by Maurice in 2003, and Robin (cancer) in 2012. It’s a wonderful documentary for fans of the Bee Gees, as well as those just wanting to know more. I am especially grateful to director Marshall for including my favorite, “Massachusetts”. Mr. Marshall has had quite a career himself. He had a minor acting role in the classic THE LAST PICTURE SHOW (1971), has been a Producer on numerous Spielberg movies including RAIDERS OF THE LOST ARK (1981), directed ARACHNOPHOBIA (1990), and has been married to Hollywood power producer Kathleen Kennedy since 1987. Elected to the Rock and Roll Hall of Fame in 1997, the Bee Gees music can be described as: “Ah, ha, ha, ha, stayin’ alive …” HBO Documentary premieres December 12, 2020

The Bee Gees: How Can You Mend a Broken Heart 2020 Movie Review Poster Trailer Online