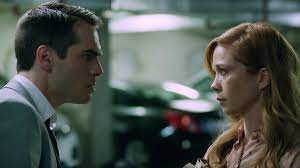 Cummings is Jordan Hines, a hungry young agent who acts as if he’s an inch away from signing every potential client who has ever turned him down. He’s engaged to Caroline (Virginia Newcomb), who for some reason accepts his transparently fake positivity, but the impending marriage looks like just one more stage in Jordan’s attempt to look like a success. When he receives a purple envelope holding an anonymous invitation to a one-time “no strings” sexual encounter, he barely even pauses to question the sender’s motives.

While he puzzles over the mystery letter and follows its instructions, we glimpse the lives of others who’ve received similar letters and acted on them. Suffice to say there’s a small epidemic of domestic violence in Los Angeles, with few clues to the sources of conflict.

Jordan doesn’t know that, but still, after consummating his mystery date (both parties are blindfolded throughout the rendezvous), he becomes consumed with worry. In a string of scenes scripted to show what Cummings does best, we watch Jordan attempt to lie his way to the truth: He sidles up to people who might help him deduce who sent the initiation, tries to be smooth while he questions them, then quickly loses his cool as things escalate. Amusingly, the less-powerful aren’t always impressed by his efforts — take the hotel desk clerk who clearly has dealt with a Hollywood flake or two — but still, this detective mission moves forward, toward its surprising end.

Meanwhile, we glimpse how Jordan’s industry is confronting its own con-man crisis. With pal PJ (played by McCabe), Jordan works at a talent agency with a three-initial name (not one you’re thinking of, though he likes to imply that’s the case). It seems that most of their meetings these days revolve around outsiders’ attempts to prevent them from packaging talent to increase their revenue; agents huddle up to solidify future business strategies and complain about the Writers Guild. (The first title card of the end credits, in which Cummings and McCabe both have “W.G.A.” after their names, feels like a rimshot.)

One big fish they’re trying to land tells Jordan, “You are a dying social network,” and while rumors of talent agencies’ demise may be very premature, the precarity of Jordan’s lifestyle fuels much of the drama. And he’s constantly aware that, “in this climate,” his impulse to lash out at those who threaten that lifestyle will get him in even more trouble.

When Jordan confesses what he’s done to PJ, the latter starts a calmer campaign to trace the purple envelopes to their origin. Here and later, the movie’s imagining of business plans built on the massive harvesting of personal data is only half-convincing. But that’s no big obstacle to the story it tells, in which the conspiracy that gets Jordan in trouble matters much less than how he reacts to his bad choices. Individual scenes showcasing this behavior start to feel familiar as the film progresses — failed slyness, then aggression, then apologies and more lies — and Cummings’ admirers may start to worry that he needs to find another gear as a performer in order to remain viable as a lead actor, even in his own films.

But Beta Test, like Wolf before it, at least finds the hyphenate refusing to tell the same story over and over. That puts him one step ahead of the character he plays here — an inhabitant of a world where a man can keep a straight face while proposing to “reboot Caddyshack, but with dogs.”