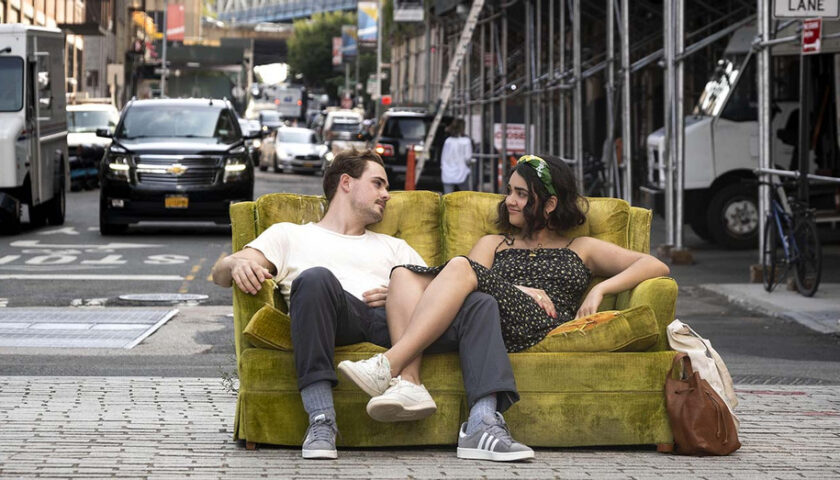 According to the iron-clad definitions provided by two or three sites on the World Wide Web machine, millennials are people born between 1981 and 1996. That places the cast of 26-years-old-and-up characters in feature rom-com The Broken Hearts Gallery on the younger end of that generation, so old enough to have post-college jobs and some anxiety about making rent. That said, they’re not so old as to really have much to worry about other than hanging out, tending to the virtual gardens of their social media feeds and living their best lives. Like Friends in the mid-1990s and Girls in the 2010s, this offers a portrait of blithe, horny twentysomething New Yorkers — only here writer-director Natalie Krinsky’s portrait of a generation is markedly more diverse in terms of ethnicity, sexual and gender identity and body shape because, duh, it’s 2020.

And yet, despite all its timely trappings, in a much more profound, molecular way this boy-meets-girl love story is as formulaic as any Irene Dunne, Doris Day or Kate Hudson vehicle, from the meet-cute to the extravagant gesture/declaration-of-love climax. Self-mocking irony, the salt that tempers the sweetness in the best, most enduring romantic comedies, has been strangely skimped on. Perhaps the naïve earnestness of Broken Hearts — as it works the machinery of the genre’s rusty tropes, like a hipster getting a flea-market wind-up record player working — is the most 2020 thing about it.

Nevertheless, there are a few charming moments when Krinsky wittily tweaks expectations. For example, there’s a low-key pursuit at one point, where our heroine Lucy (vivid, effervescent Geraldine Viswanathan of Blockers and Hala) hotfoots it to catch up with ex-boyfriend Max (Utkarsh Ambudkar) in the streets. He slides by a charity worker as if she were no more interesting than a panhandler or a fire hydrant; Lucy, even though she’s in a rush to keep up with Max, actually stops to sign the petition because it’s for Planned Parenthood.

A few more of those kinds of spiky, risky gags would have been welcome, especially as it sometimes feels as if the film has had all its edges sanded down by either real or internalized test screenings and focus groups to make it as broadly appealing as possible. Lucy, for instance, is obviously of South Asian descent, but that’s no more a matter to be discussed than her generous bust size, the Jewishness of her friend Amanda (Molly Gordon) or their other friend Nadine’s (Phillipa Soo from Hamilton) preference for dating women, especially Russian models. Ethnicity and sexual preference are never a problem, never challenging, which is lovely but also a little weird in its frictionless utopianism.

Indeed, the only thing that is a problem for Lucy is her inability to let go of stuff — literally. We’re talking plastic cups and wrinkled but unopened condom packets, all mementos of all the failed relationships Lucy has ever been in. Her bedroom in the apartment she shares with Nadine and Amanda is chock-full of the stuff, a personal quirk that’s either a sign of hoarding monomania or kind of cute. “I live in a cave of souvenirs,” she tries to explain to her friends in the opening scene. “Like the little mermaid!”

The prince she saves from a near shipwreck is Nick (Dacre Montgomery of Stranger Things, like Viswanathan doing a bang-up job of disguising his natural Australian accent), an affable Everybro sort of guy who goes along with it when Lucy mistakes him for a ride-share driver. The wreck he’s still trapped in is a former YMCA that he’s painstakingly refurbishing by hand to turn it into a boutique hotel, with an assist from builder friend Marcos (Arturo Castro).

When Lucy loses her job in a gallery (run by the eerily ageless Bernadette Peters), she volunteers to help Nick fix up the hotel, especially when she hits on an idea to create an installation there that exhibits totems, both from her own collection and other people’s, from her now dissolved romances. The first item on display is one of Max’s ties, for instance, and the next day someone staples a map on the wall too. Once Lucy puts out the call for donations, strangers are lining up to drop off ex-boyfriend’s yarmulkes, empty body casts, Day of the Dead skulls and so on — until what becomes the Broken Hearts Gallery gets a profile in New York magazine, the ultimate hipster badge of honor.

It’s a great concept for a gallery — and has been ever since something much like it was thought up by Croatian film industry professional Olinka Vistica and her ex-partner, artist Drazen Grubisic, who founded a crowd-sourced collection of mementos that came to be known as the Museum of Broken Relationships in Zagreb, putting on their first exhibition in 2006. Since then, the museum has had pop-up shows and collection points in over 50 locations around the world, including a space in Hollywood that’s since closed.

Now, this isn’t to say that Krinsky and her colleagues plagiarized the idea, but it’s a shame that Vistica and Grubisic’s brainchild isn’t at least name-checked here in the credits, let alone in the dialogue. Also, it seems fitting that the Broken Hearts Gallery in the film seems exclusively devoted to tokens of moribund romances, whereas the museum has a broader, more complex approach, taking in remainders from not just dead love affairs but also severed friendships and lost loved ones. One of the powerful exhibits in the Zagreb site, for instance, is a suicide note written by a donor’s mother.

There is only one parent in The Broken Hearts Gallery, played by Sheila McCarthy, a character who has memory trouble. Indeed, aside from her, the gallerist played by Peters and a few silent elders in a care home, there is practically no one of note in the film over 35 or under 25. As such, it presents a strange snapshot of young people talking just among themselves, presumably for an audience expected to be much like them, or maybe a little younger. (It has a PG-13 rating – there’s sex mentioned but nothing explicit is ever shown.)

That means for anyone not in the very specific demographic group depicted, the experience of watching this is like being trapped in a tiny downtown club, where the food isn’t that good and the portions are tiny.