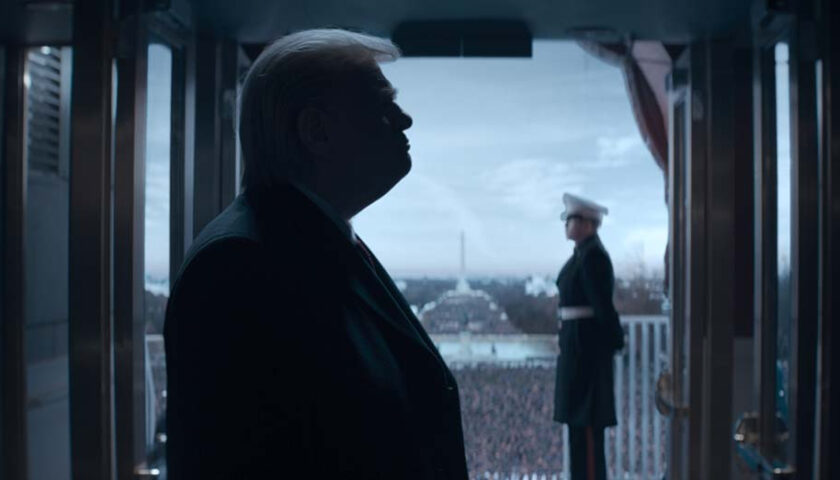 The first character we hear speak in “The Comey Rule,” Showtime’s two-episode limited series about the unhappy tenure of the former FBI director launching Sept. 27, is not James Comey at all. (Fear not! It should come as no surprise that he’ll have plenty to say later.) Instead, it’s former Deputy Attorney General Rod Rosenstein, played by Scoot McNairy, who starts us off, pulling Comey’s memoir “A Higher Loyalty” from a shelf and complaining about its author’s flair for self-dramatizing antics. “In governance, there are people who do the work and there are showboats,” Rosenstein says. “Jim was always a showboat.”

Not even most Comey fans might contest this point. Comey’s late reopening of the case against Hillary Clinton is seen by many (including the onetime candidate herself) as decisive in delivering the election to Donald Trump. But the man himself has tended to depict it as a personal drama in which he played hero — an argument compelling enough to a segment of the audience to have made his book a bestseller, and to have generated this show. The title of his memoir says it all: For Comey, the most recent presidential contest came down to a war staged within himself, in which pragmatism or a willingness to cede the stage was superseded by a devotion to ideals that he doesn’t mind telling you are lofty. That makes Jeff Daniels, who on HBO’s “The Newsroom” played a media figure who became famous and beloved for lecturing people, an apt casting choice.

Comey’s story, here, is neatly divided in two. In the first episode (beginning after Comey’s fall but then flashing back), we see Comey’s rise at the FBI and his tenure there before Trump, leading up to election night 2016. The next installment depicts Comey’s slow-motion fall, as the president his decisions helped create seeks in Comey an ally, and then torches him for insufficient dedication to the cause of Trump, played by Brendan Gleeson as a wheedling, insidious figure whose flashes of rage punctuate a sort of mafioso finesse. The show’s narrative cleanness — the upswing and the downswing, a big rupture in the center, and values carried throughout — generates a sort of tidiness throughout that looks a lot like writerly laziness.

To wit: Comey’s wife (Jennifer Ehle, misused) begs him to step back from the Clinton email investigation by telling him, “For once in your life, don’t do your duty,” burnishing Comey’s reputation while only seeming to admonish him. Russian operatives are shown toasting their victory in the street before an onscreen chyron hits reading “Election Day.” And in an absolutely grotesque failure of tone and judgment, the camera pans through a sea of dead bodies, their phones still ringing with loved ones fearing the worst, then rises up to depict Comey contemplating them with arms forcefully planted on hips. He asks an aide to gather the first responders to the Pulse nightclub shooting, so that he can thank them. If this invocation of a foundational tragedy for the modern queer community is meant to show off Comey’s gutsiness, it does the opposite, suggesting that no credible and proportional defense of Comey is possible. We must trot out the dead (overwhelmingly, queer people of color) to show his strength; it is, perhaps, chaos on which he, like the boss who fired him, thrives.

Writer/director Billy Ray has done strong work before. “Captain Phillips,” which he wrote, and “Shattered Glass,” which he wrote and directed, are modern classics of precisely this genre of condensing recent history into straightforward narrative. But those films told stories of narrow scope — a case of piracy at sea, one man’s fabulism at a small political magazine — through the eyes of a single, deeply human and relatably vulnerable character. Characters here float in and out with only the most shorthanded of explanation (Sally Yates, played by Holly Hunter, is a lawyer who acts like a Holly Hunter character), and Daniels’s Comey prides himself on being practically post-human, a creature governed by his supercilious awareness that he is in the right. The movie bends and strains to accommodate Comey’s showy displays of duty and righteousness, such that by the time he meets Trump, Comey has had anything about him that we might grip onto sandblasted away by honor. What might have been a human tragedy about a man whose belief in the purity of institutions led to those same institutions’ coming apart under a tyrant is, instead, largely a fable about a hero.

Rosenstein’s critique of Comey as blowhard at the film’s outset seems to have been made to get it out of the way, as Comey is unrelentingly portrayed as morally correct: Not hard to do, for this program’s intended audience, given that he is ultimately facing down Trump. Gleeson is at once the best and worst thing about “The Comey Rule,” uncannily evoking the president’s aura of menace and doing so while pushing his performance past a bizarre sheath of makeup that misses the mark. (An actor’s tone is so much more important than their specific visual accuracy; it’s a wonder they didn’t just let Gleeson deliver his sharp take on the President while looking like Gleeson, or like a person.) The scenes between them crackle with some of the only real energy “The Comey Rule” musters, in part because Comey is roused from self-satisfaction to passion, and to fear. Though Comey is eventually canned, he claims, and is granted, a moral victory.

There’s more here than “The Comey Rule,” with its rubber-faced Trump resembling a comic-book villain, lets us see. In Trump, Comey found someone whose blind avarice provided a mirror image to his rigid insistence upon protocol; that neither party would bend made it inevitable that one would get snapped. But this series fails to find anything provocative or narratively rich in Comey’s dismissal from government, in part because we at home know the man never really went away. Beyond his memoir, he remains a presence on social media, where he contributes self-aggrandizing and gaseous posts (recently, with a startling lack of self-awareness, suggesting that this nation elect more women) and, until recently, on the lecture circuit. He’s crafted a role for himself as Comey-in-Chief: A figure outside the government and frankly outside real relevance whose voice demands to be heard. This need for attention and ability to procure it has proven Comey unusually fluent in the language and the new social mores of the Trump moment, which is a chewily complicated side of the man that the self-satisfied, inert “Comey Rule” fails to reckon with. The man himself was possessed of the belief — not a novel one in recent years — that when it came to American crisis, he alone could fix it. The show, in his thrall, agrees.