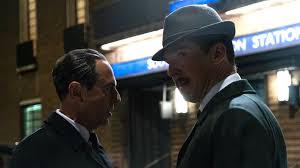 “The Courier” will evoke memories of prior spy movies and the tropes they often employ. More specifically, you may be reminded of the superior Cold War-era spy-swapping 2015 film, “Bridge of Spies.” Both films are based on real events and have Russian spies, imprisoned agents, and a swap between Russia and the West. Here, however, the swap is not an integral part of the main story, and the Russian spy is working for MI6 and the CIA. As in Spielberg’s film, this is a meditation on the individual cost of doing something not for personal gain but for the common good. There’s a whole set of cinematic clichés that come with stories like that, and adding them to this mix risks overcrowding. But cliché is not a bad thing if it’s done right, especially if they involve characters to root for and a fair amount of high stakes to overcome.

Director Dominic Cooke and screenwriter Tom O’Connor tell the “based on true events” story of Greville Wynne (Benedict Cumberbatch). Wynne was a British businessman who, from 1960 and 1962, smuggled thousands of pieces of intel out of Russia before he was captured, imprisoned, and tortured for two years by the KGB. Assisting him in his role as “courier” is Oleg Penkovsky (Merab Ninidze), a far more experienced Russian agent. Wynne’s role as a salesman who works his magic on Eastern European clients makes him a good smuggler; as a Brit, he’s assumed to be a purely capitalist creature whose only concern is money. Couple that with his superb talent for schmoozing and boozing with customers, and he emerges as someone who’s neither suspicious nor a potential danger to Soviet security.

Wynne is surprised to be recruited by MI6’s Dickie Franks (Angus Wright) who, along with CIA agent Emily Donovan (Rachel Brosnahan), convinces him to meet with Penkovsky, because any intel will help President Kennedy during the Cuban Missile Crisis. She assures him he’ll be safe. Initially, Wynne turns them down because the entire idea seems incredulous. He has no formal training. Plus, he’s a family man with a precocious young son, Andrew (Keir Hills) and a loving, forgiving wife, Sheila (Jessie Buckley). Sheila’s pardoning nature revealed itself after Wynne took those dirty jokes about traveling salesmen to heart. Sudden trips to Moscow, frequent trips he can’t tell his wife about in any regard, are bound to arouse her suspicions about new infidelities.

“The Courier” makes the connection that Wynne’s job of “making the clients happy” has the same thespian qualities of being a spy: He is playing a role, one that requires him to hide his true feelings and present a specific, carefully calibrated, unflappable front. Penkovsky reassures him that he’s handling the job well. As the two family men spend more time together, their guards lower and the two become close friends. Cumberbatch and Ninidze do a very good job conveying their newfound bond, which helps the viewer swallow the unbelievable decision that sets the second half of the film in motion.

The first hour, which focuses on the existing and budding human relationships in England and in Russia, plays better than the prison-bound second hour. There’s a sweet, realistic dynamic between Sheila and Greville. Buckley gives an excellent performance that carries her over to the predictable moment when she has to pivot to the strong spouse cautiously awaiting the return of her husband. Of course, she’s convinced Greville is cheating when she catches him exercising more than he’s ever done, not to mention that he’s trying new things he’s never considered before in bed. Buckley handles this with the right touch of bemusement and forcefulness, warning that she won’t be so understanding if there’s another woman. Her best scene is when she realizes the true nature of her husband’s secrecy, and how she may never have the chance to tell him she’s sorry for not trusting him

We also spend time with Penkovsky and his wife and daughter. Their scenes are just as loving as the Wynnes’, but they’re tinged with more danger. Penkovsky is a decorated former soldier with many security clearances, and as he tells Wynne, everyone in Russia has eyeballs that surveil for the state. One can easily predict that Penkovsky’s espionage work will catch up with him, but it’s a bumpier road to believing that Wynne would risk life and limb to go back in to try and help him defect. Once he’s captured, “The Courier” loses steam as it isolates its main character for violent prison scenes that we’ve seen endless times before. Those sequences culminate in a jail cell reunion between Penkovsky and Wynne that’s memorable because it wears its empathy like a sentimental badge of honor.

Though there’s nothing new or transformative here, “The Courier” stays afloat due to the acting by Buckley, Cumberbatch, and Ninidze. Unfortunately, Brosnahan’s performance is flat. Her character feels completely out of place here, as if Donovan were thrown in to inject an American into a very British story. Her one big scene, where she tries to terrify Wynne by describing the four minutes he’d have if a nuke were heading for London, is unconvincing and doesn’t have the reverse psychology effect the film thinks it does. I was a bit surprised that “The Courier” worked for me as well as it did, and I must give some credit to Sean Bobbitt’s moody cinematography and Abel Korzeniowski’s engaging score. Their work gave the illusion that this film could have been made in the timeframe it is set. That sealed the deal for me.