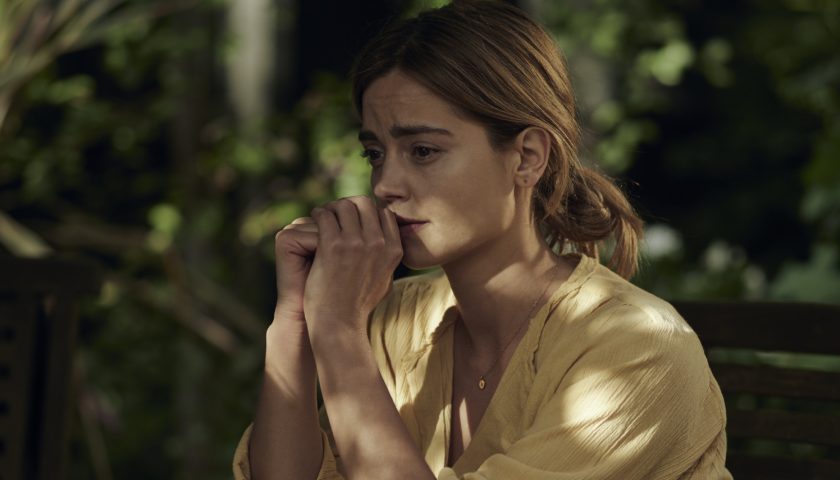 Review: BBC One are now in the thick of adapting Helen FitzGerald’s bestselling novel The Cry for television. The new series, starring Jenna Coleman (Victoria) and Ewen Leslie (Top Of The Lake) is now filming in Scotland and Australia, and the first pictures (above and below) have now been released. Written by Jacquelin Perske and directed by Glendyn Ivin, the forthcoming drama series looks set to take us on a heartbreaking emotional rollercoaster – tissues at the ready for this one, it looks like.

Here’s The Cry’s recently-released synopsis, so you can get a better idea of what to expect…Joanna (Coleman) and her husband Alistair (Leslie), travel with their baby from Scotland to Australia to see Alistair’s mother, Elizabeth (Gonet) and to fight for custody of Alistair’s daughter Chloe (Kavenagh) against his Australian ex-wife Alexandra (Keddie). However, when they arrive in Australia, Joanna and Alistair are forced to face an unthinkable tragedy that changes their lives and their marriage forever. It is the catalyst for a journey into the disintegrating psychology of a young woman, exposing the myths and truths of motherhood.
“We’re very excited to have started filming in Australia and to have such an incredible array of Australian talent joining Jenna and Ewen, topped off with some of Scotland’s most accomplished actors,” said Elizabeth Kilgarriff, BBC Drama Senior Commissioning Editor, and Gaynor Holmes, BBC Drama Commissioning Executive, in a statement. “Watching them bring Helen FitzGerald’s gripping, page-turner novel and Jacquelin Perske’s wonderful scripts to life is a joy and we can’t wait for BBC One audiences to see The Cry.”

Executive producer Claire Mundell added “I am delighted to have such a talented cast joining Jenna, Ewen and the team. It’s so exciting to have such brilliant Scottish actors as Stella and Sophie joining our absolutely stellar Australian cast Asher, Alex, Markell and Shareena and to tell this thrilling story which spans the two countries. The start of shooting marks an incredible moment for our company as we start production on what is a truly international drama with Scottish roots. We could not be more thrilled to be shooting the show in the incredible Australian light of Melbourne, and contrasting that with the beautiful West End of Glasgow.”