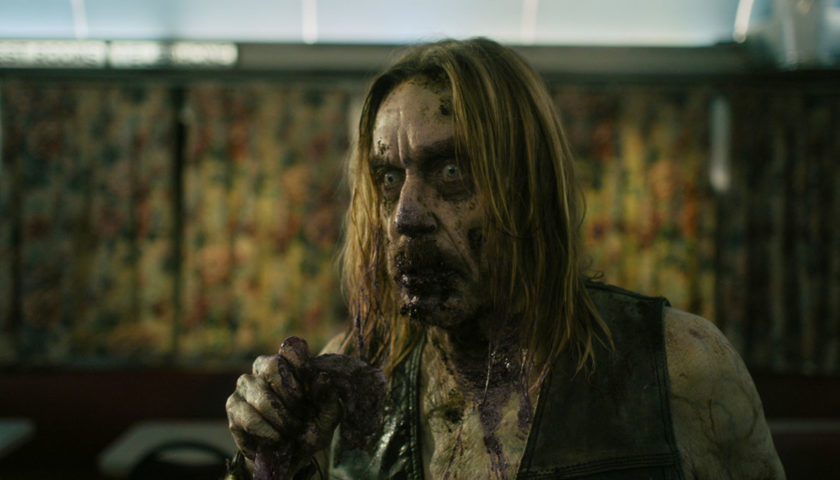 Review:What does a Jim Jarmusch zombie movie look like? It looks like just what you’d expect: a cheeky hipster walking-dead comedy that surveys the apocalypse with a shrug of blasé self-consciousness. (It seems to be saying, “The dead are rising! And what else is new?”)

“The Dead Don’t Die,” which kicked off this year’s Cannes Film Festival, opens with a shot of a cemetery, an all-too-obvious nod to the first sequence of “Night of the Living Dead.” The movie then presents us with two poker-faced cops, crusty Cliff (Bull Murray) and morose Ronnie (Adam Driver), who wear their nerdish glasses the way the downtown punk derelicts of “Stranger Than Paradise” wore their beatnik hats. (There’s a third cop, Mindy, played by Chloë Sevigny, and she wears nerdish glasses too.) “The Dead Don’t Die” is set in the kind of so-normal-it’s-a-little-weird indie-movie small town that has one diner, one police station, one gas station, and one homeless man (in this case, Tom Waits as a woodland sage who resembles Moses), and where the people are named things like Hank and Fern. The name of the town is Centerville, but it could have been called Twin Peaks Lite.

At the diner, Steve Buscemi shows up as a farmer in a cap that reads “Keep America White Again,” and the fact that he’s buddies with the guy seated next to him at the counter, played by Danny Glover, is one of Jarmusch’s feel-good corkscrew liberal jokes. In the midst of all this ironic Middle American folksiness, Cliff and Ronnie begin to observe signs of something strange. Electronic devices keep fritzing out, and the day refuses to turn to night. On the car radio, they hear a steel-guitar country anthem called “The Dead Don’t Die” (“After life is over, the afterlife goes on”), and the news is full of reports on “polar fracking,” a corporate-sanctioned environmental assault (“Polar fracking has created great jobs…”) that is causing the earth to get thrown off its axis.

And that — as if we needed an explanation — is why the dead begin to rise. The first sign of the zombie apocalypse is a couple of hands poking out of the earth in front of a gravestone. It’s meant to be a burlesque horror moment, but about our only thought is, “Gee, it looks just like the ‘Thriller’ video.” Then the first two zombies, played by Sara Driver and Iggy Pop (a walking pair of in-jokes: Driver is Jarmusch’s long-time partner and Iggy already looks like the undead), enter the diner and proceed to rip the living guts out of the two people there. The zombies, in what will be a theme, mutter the one word they still cling to from their past lives. In this case, the word is “coffee.” (The two grab an entire pot of it and lurch out of there.)

The zombies in “The Dead Don’t Die” behave, for the most part, in classic zombie-movie fashion. They’re a mottled-skin horde of flesh-eaters who stagger through the streets, pressing their faces against windows and shoving their arms in between wooden slats designed to keep them away. None of this is remotely scary, or is meant to be; it’s all served up as a straight-faced semi-absurdist joke.

The trouble with “The Dead Don’t Die” is that the notion of treating a zombie uprising as a pitch-black comedy drenched in attitude has already been done to death. It goes back to “Shaun of the Dead,” to films like “Planet Terror” and “Re-Animator” — and, of course, to “Dawn of the Dead” itself, which laced its grisly spectacle with a ripe satire of the consumer culture. When Jarmusch has his zombies skulk around repeating words like “Chardonnay” and “Snapple” and “Wi-Fi,” it’s really just a repetition of George A. Romero’s original they’re-going-back-to-what-they-remember joke. Considering that that was 40 years ago, Jarmusch adds shockingly little to the humor or the perception.

In “The Dead Don’t Die,” the only way the zombies can be killed is by getting decapitated (one of the film’s catch phrases is “kill the head,” a not-quite-different-enough variation on Romero’s “kill the brain and you kill the ghoul”), and this is all a big set-up for the film’s most stylized character: a Scottish extraterrestrial samurai mortician (yes, you read that right), played by Tilda Swinton in long pale blonde tresses, wielding her sword with ultimate I-am-woman-watch-me-slash finesse. Jarmusch even gets into the FX of it all. The head-slicings emit a smoky puff that evokes, of all things, the deaths of the heroes at the end of “Avengers: Infinity War.” It’s a pleasing effect.

But apart from that, all that Jarmusch really adds to this well-worn genre is a wink of meta japery that teeters between the amusing and the annoying. He’s saying, “Look! It’s Jim Jarmusch making a zombie movie!” And yes, the film is that rib-nudging in its self-awareness; when Ronnie mentions “the script,” he’s not talking about some writing project he’s got stashed away in a drawer. Ronnie also keeps saying “This is gonna end badly,” a line so archly pessimistic that you just know it’s got to be film’s self-fulfilling refrain. “The Dead Don’t Die” fancies itself a cutting-edge macabre comedy, but the truth is that it’s behind the curve of pop culture. That’s why it’s a disappointing trifle.