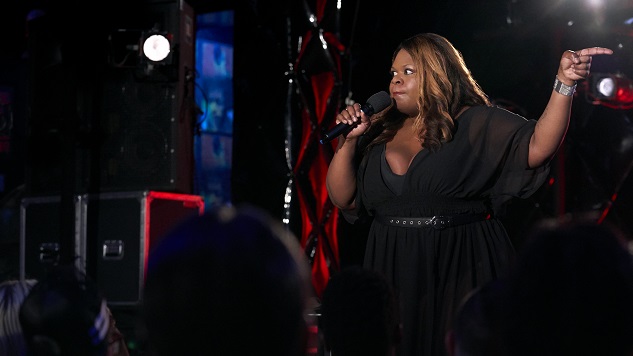 Review: Big Jay Oakerson leads off Netflix’s first themed package of half-hour stand-up specials, though calling Oakerson and his comedy compatriots The Degenerates doesn’t do him or them much justice.

The word “degenerates” implies immorality. Oakerson, Brad Williams, Yamaneika Saunders, Liza Treyger, Joey Diaz and Christina P. definitely live by morals. The Netflix focus group working committee on series naming must have struggled (or didn’t struggle enough) in this case. Calling them The Offensives might give audiences the wrong idea. At Montreal’s Just For Laughs festival, they’d call this group The Nasty Show. Somehow nasty sounds too nasty here. As does depraved. A more literal way to broadly define these comedians: Deviants.

Or heck, since they filmed these stand-ups in Las Vegas, they could have easily called them Sin City Comics.

At any rate, whatever you call them, best not to binge all six half-hours at once. There’s a reason most live comedy shows time out at 90 minutes. An audience can only sit and laugh for so long, especially at similarly-themed material.

For all of these reasons, Oakerson is a perfect choice to open the festivities, for he’s so adept at working the crowd and incorporating the real-time situations into his act that he has recorded a Comedy Central album and hosted a Seeso series (RIP Seeso) completely rooted in crowd work.

He’ll also defend his right to use the word “tranny” when he’s debating whether to try and hook up with a trans woman, and he’ll reveal how parenting a teenage daughter has changed his worldview, in and out of the bedroom.

Williams calls himself a midget and a dwarf before you get a chance to, and most of his comedy here dwells on his little personage. He eventually wins the crowd over to laughing with him instead of at him, although a little self-deprecation and go too far.

By contrast, Saunders knows she’s a big black woman, but believes the most fascinating facet of her life for audiences to know is this: “I grew up in a Christian household, so I didn’t have sex until I was 27 years old.” So Saunders has more than made up for her chaste childhood, and goes into gloriously gross details about her sexual proclivities and misadventures in her 30s.

But Treyger takes the boldest risk of any of these six performers, by laying down some serious jokes about the men who rape and murder women over sex. Just when you think she’s created perhaps too much tension in the room, she closes with a raunchy bit about Birthright.

Joey Diaz is the only comedian in this six-pack who leaned into the title of the series, noting that Vegas was built for degenerates, and establishing his own bona fides (including kidnapping a guy 30 years ago and continuing to stay in touch with him over the decades) as a 55-year-old “but 92 in cocaine years” who has a five-year-old daughter. Sounding like a dirty old Rodney Dangerfield who doesn’t need your respect (“At this point, I don’t give a f— anymore,” he says), Diaz screams about how people want to take away his right to say “faggot” and don’t understand how life would be so much easier for everyone if every guy received oral pleasure when they seemed down.

Christina P, who already has released her own hour on Netflix (Mother Inferior), performed for The Degenerates while pregnant with her second child with husband Tom Segura, and joked about looking like Ali Wong out onstage. She devoted the majority of this new half-hour to the #MeToo #TimesUp moment, mocking Harvey Weinstein, Bill Cosby, Dustin Hoffman, Kevin Spacey, Matt Lauer, Ryan Seacrest and Louis CK. For the latter, however, Christina asks: “Why Louis? Why?!” She does defend CK’s warning his victims as somehow better than just about every other pervert man who reveals himself in public, and even reimagines two of CK’s victims as Shaggy and Scooby-Doo, shaking in fear, only to become the meddling kids who didn’t let him get away with it. Christina juxtaposes these sex offenders with the president, and turns an audience experiment into a still all-too-timely political joke. Don’t worry, though. Christina offers a solution in public shaming of these men, and suggests to everyone else to make the most with whatever time they have left in life.

And spoiler alert, perhaps the most fitting closing line for any comedy special in 2018: “You make Louis CK watch you jerk off!”