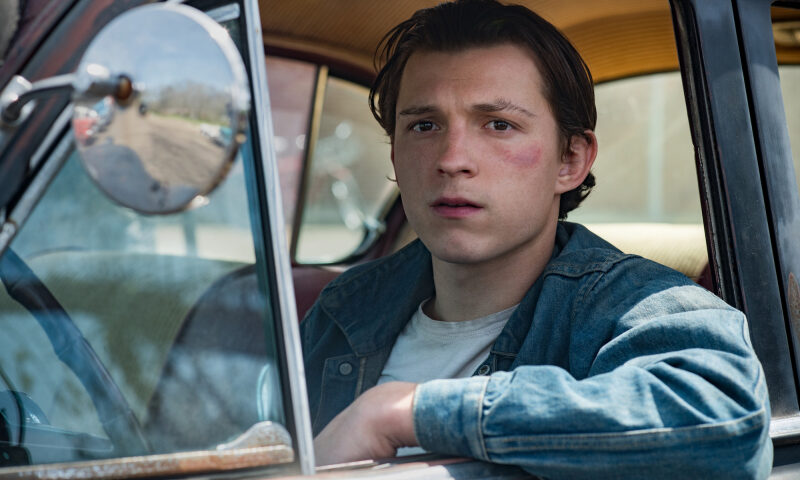 There is no reason to care about anyone in Antonio Campos’ “The Devil All the Time,” a sweaty, bloated mess of a movie that flushes a knockout ensemble down the drain. More a pileup of scenes and tragedies strung together than the Altmanesque kaleidoscope of intersecting lives it could have been, this slog of an adaptation from Donald Ray Pollock’s terrific Appalachian gothic is dead from the start, with stars like Tom Holland and Robert Pattinson eagerly doing their best to resuscitate the corpse for a nearly two-and-a-half-hour running time.

Director Campos has excelled in mining the masculine and feminine in much smaller-scale movies like indies “Afterschool,” “Simon Killer,” and “Christine,” but that once nimble and focused approach — generally on films that chart an individual’s psychic unraveling into a murderer, sociopath, or suicide case — doesn’t translate successfully to a broader canvas. “The Devil All the Time” has to juggle so many characters that it becomes incoherent and basically boring onscreen, bobbing more along the logic of “here’s this person, and then this person, and then this person, and then that person again” than that of a complex but well-flowing ensemble tragedy where the fates of disparate characters border one another, and then lock into place. A violent but soulless meditation on faith taken to harrowing extremes, “The Devil All the Time” hurtles toward a constantly-hinted-at awful endgame, but by the time the final crash arrives, well, thank God it’s over.

A disinterested narrator pitches us between the aptly named Knockemstiff, Ohio, and Cold Creek, Virginia. “Two piddlin’ places” thwarted by “dumb luck” and “God’s intentions.” Sodom and Gomorrah? Old Testament vibes abound. It’s the late 1950s, and Arvin Russell (Tom Holland) is a jean-jacketed rebel with plenty of cause after his ill-fated parents (Bill Skarsgård and Haley Bennett) set him up for failure with a one-two-three punch of religiously charged trauma. Skarsgård’s subzero-blooded Willard Russell, barely here, is the film’s scariest character. His full-bodied and ultimately murderous submission to a lord’s will triggers a chain of horrific events that plunge “The Devil All the Time,” in its first scenes, into gothic horror, along with repeated flashes to soldiers crucified and skinned-alive during Willard’s scarring time in South Pacific World War II.

Needless to say, Arvin is an orphan who grows up bitter and angry, left to be raised by his grandmother Emma (Kristin Griffith, here the maker of the best chicken liver in town, to her own downfall). It’s postwar America, a landscape both depressed by half a century of violence, and deludedly hopeful about God’s plans for the future — and in chronic denial when they fall apart.

The ugliness never ends, and the rest of the movie watches teenaged Arvin grapple with a sickening world. A blond, pretty, but mostly pretty damaged Holland shoulders Arvin’s burdens ably, though the script prevents him from being anything beyond always tightly coiled. Even if by design, rarely has such a beautiful cast looked so hideous. Everyone here is on the verge of death. As the crooked local law enforcement who takes hand-jobs from local damsels in his patrol car, Sebastian Stan is almost unrecognizably bloated, hermetically stuffed into his uniform like a sausage in a too-small casing.

Many more crazy people emerge. Riley Keough admirably tries to breathe life into Sandy Henderson — the haggard, white-trash, fur-wearing accomplice to her serial-killing husband Carl (Jason Clarke) — with the dead-inside swagger of her tacky but ridiculously enjoyable pivot as a kind of modern-day Madam in Andrea Arnold’s “American Honey.” But she instead rides shotgun, literally and emotionally, to Carl, who lures virginal male hitchhikers into the back of their car, stages sexually degrading photo shoots starring the victims and his wife, and then offs them point blank.

That side-story is juicy and lurid enough on paper, and in Pollock’s novel it’s downright terrifying, with enough intrigue to fill a movie on its own. Picnic spreads, daylight setting, and turned-down sound design suggest the disturbing and precisely staged killings in David Fincher’s “Zodiac” are what these scenes wanted to be. But the rising body count here elicits more of a yawn than a shriek, as we impatiently wait for these honeymoon killers’ hopeless scheme to end. When the years-long spree finally does, in a three-handed shootout you can see coming from outer space, it’s sweet relief. It’s hard not to keep tally of the various story threads as their players get picked off, their loose ends tied lethargically together. One down, a few to go, and so on.

The film’s most stirring turns come from two young and gifted actresses handed barely more than 10 minutes of screen time apiece. The always luminous Mia Wasikowska — now forever tinged with a brittle creepiness thanks to her winningly deranged performance in David Cronenberg’s “Maps to the Stars” — plays a loyal churchgoer unceremoniously handed a grim fate by her psychotic husband (Harry Melling), who thinks dumping a bucket of spiders over his head will somehow prove to his parish God Is Real. Wasikowska is a rare moon these days. It’s curious why she turned out for this thankless role. She is, we learn, the mother of Lenora (Eliza Scanlen), another one of Arvin’s grandmother Emma’s foster children. Scanlen brings a sweet sadness to Holland’s tragically naive sort-of sister over whom he is protective to a fault. Scanlen’s fate is no less cruel than Wasikowska’s. Anyone you remotely like in this movie, prepare to bid adieu.

All too eager to serve the lord, keep her head down, and submit to the female trajectory required of the period, Lenora is brainwashed by Robert Pattinson’s new preacher in town, an absolutely foul freak with a taste for deflowering the congregation’s most innocent. A slovenly, ill-looking Pattinson lurches through just a few scenes of this movie, and thank the lord. He’s rough on the eyes and ears, a bundle of mealy-mouthed actorly tics, and adorned by flamboyant costuming that brings to mind Jerry Seinfeld’s puffy shirt as laundered in the River Styx. The outcome is a dandy fresh from the grave, who must have stepped on a Stella Adler how-to on the way home from Hell.

Pattinson’s Preston Teagardin is another character gone as soon as he’s here, a fundamental problem in a movie that becomes a kind of “Mars Attacks!” as done by Cormac McCarthy, as famous actors get offed one after the other against a swampy backdrop and under the thick loom of supposedly literary gravitas. Even in third person, Pollock’s novel skillfully balanced a lineup of degenerates and would-be do-gooders with the grace of William Faulkner’s “As I Lay Dying,” confidently moving between people and places with a guiding omniscience that threw open a wide window into a world that you maybe didn’t want to visit, but sure pulled you in.

Screenwriters Antonio and brother Paulo Campos can’t meet the demands of omniscient fiction, shuffling scenarios with the fervor of a manic story editor zigzagging index cards across a whiteboard. Editor Sofía Subercaseaux has a hell of a job on her hands, but it’s hard to mold this material into the shape of a feature film. Back-and-forth dips in time contribute nothing to the emotional arc, especially early in the film surrounding Helen Hatton’s (Wasikowska) abrupt farewell. A miniseries treatment would’ve suited this book more elegantly.

Campos’ films have plumbed the depths of loathsome people before, often reaching profound conclusions about what brought them to self-destruction, but the clown car of broken losers in “The Devil All the Time” are all surface-level despicable. What slivers of catharsis are afforded to even the most likable characters — which is really a question of power-ranking who do I hate the least? — are more a reprieve for a weary audience than the people onscreen. They’re stuck in Hell, but that’s their problem, not ours.