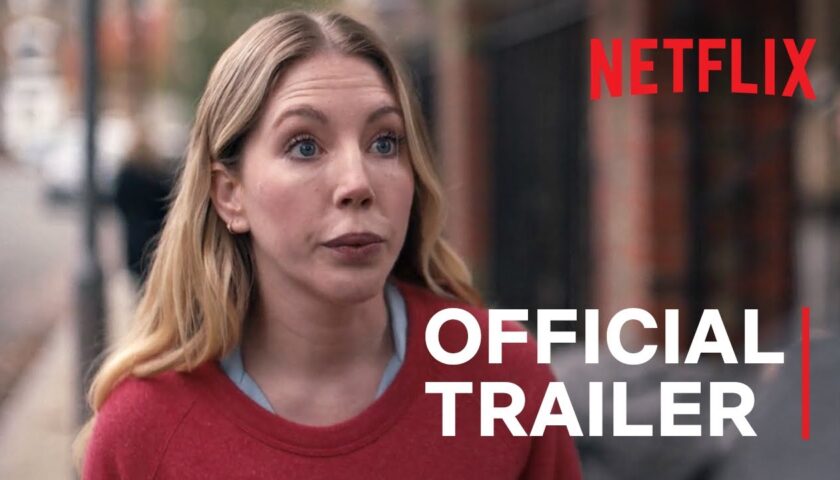 It’s hard to think of something less risky for a performer than making a big show of being daring.

On Netflix’s new show “The Duchess,” series creator and star Katherine Ryan makes a very big deal out of transgressing, playing a character whose showy amorality feels borrowed from other, better shows. Ryan’s character, also named Katherine, is a London mom who doubles as a chaos agent. Two minutes into the first episode, Katherine tells off a fellow mom at the playground, calling her daughter (who has a learning disability) “dicks-lexic.” She later sends nudes of herself to this unfortunate woman’s husband in an attempt to break them up. This is all table-setting for the show’s main action, in which Katherine torments and is tormented by her ex (Rory Keenan), with whom she wants a second child; her vacillations about what she really wants, and the ways in which she can use getting what she wants to twist the knife on her ex further, take us through six punishing half-hours.

Ryan represents her onscreen avatar as a badass rebel doing things her own way — vainly missing the point that an antihero is supposed to, you know, be something other than a hero. Everything about her character is carefully calibrated to scandalize, starting with her outfit in the show’s first episode: She walks her daughter Olive (Kate Byrne) to school in a sweatshirt reading “World’s Smallest Pussy,” with marabou fringe. It’s never commented upon or developed further. This, like the rest of Katherine’s antics, puts nothing on the line, and indeed is intended as a fluffy bit of self-congratulation. It’s a half-joke whose punchline is “wouldn’t it be crazy if someone were this arrogant?,” less shocking than wearying.

Elsewhere, Ryan is careful to always provide a justification for Katherine’s actions: To wit, when she calls her daughter’s schoolmate a “tasteless little ditch pig,” she swiftly explains that she’s just a protective parent. Everyone on the show is always worse than Katherine, so her outbursts are always the correct response. Even the show’s one seemingly worthy character, a boyfriend played by Steen Raskopoulos, is eventually revealed to be cruel in a moment when he mistreats young Olive, providing Katherine an opportunity to prove herself — she may be awful, but she’s never not correct.

For all this, the show is manageably toxic up until one extended scene in which it truly loses its grip. Katherine, giving up her hopes of conceiving with her ex, decides on a whim to pursue adoption, an option treated as a convenient backstop for baby procurement. She tells a case worker that she would take any child “whatever the age or drug problem”; “just get us a baby,” demands Olive. When the case worker sternly suggests there are some issues with Katherine’s plan to adopt — namely, that there is no plan, and that Katherine is treating it as an obviously undesirable option — Katherine compares this woman’s hygiene negatively to that of her dogs. “Adoption was only my last resort anyway,” Katherine says. “Eat a dick; I’ll stick with the kid I’ve got and you can keep your secondhand crack babies.” It ends up not mattering: In the end, the case worker disappears, and Katherine gets rewarded with what she really wants despite never evolving a bit. But would it surprise you to learn that the woman Katherine calls dirtier than a dog and a purveyor of — again, for emphasis — “secondhand crack babies” is Black, and that Katherine is white? If not, why not?

As a critic and a viewer, I believe anything can be fair game for comedy: “Sally4Ever,” recently, centered a maniacal, abusive narcissist (Julia Davis) to great effect, and some of my favorite episodes of television, ever, are installments of “It’s Always Sunny in Philadelphia” centered around the cruel, racist Dee Reynolds (Kaitlin Olson). But those shows don’t pause to appreciate their villains’ ways with a line; it makes wrongheaded beliefs the butt of the joke, rather than their creative engine. As someone who is a parent by adoption, it hurts me, deeply, to see a TV show take a long moment to appreciate what it represents as the craft of Katherine’s way with insults, ones that cut across whole swaths of people and experiences so mindlessly. It’s furthermore painful to watch stupid behavior, and stupid writing, treated by its creator as subversively intelligent. I, unlike Katherine, believe people who have been adopted, like my daughter, can do anything. Personally speaking, I hope that, even if she’s never handed a megaphone as massive as Netflix’s, she grows up to do more than create art as devoid of purpose, humanity, or worth as “The Duchess.”