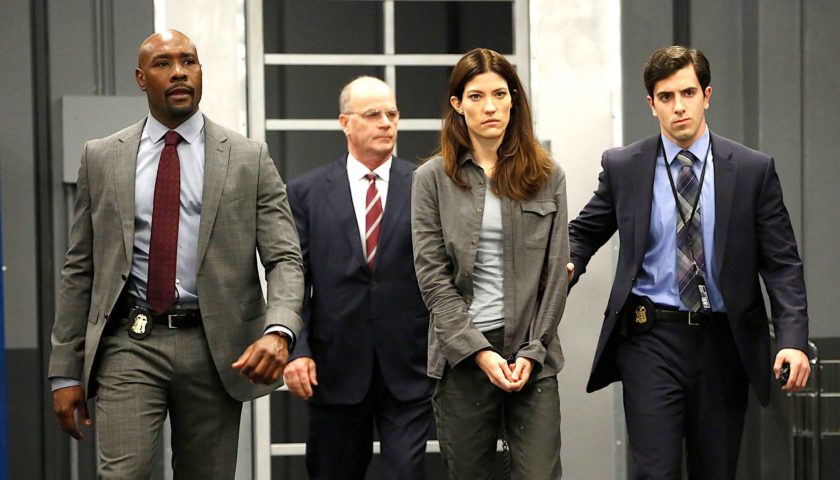 Review:Jennifer Carpenter, who plays the disgraced CIA agent Erica Shepherd in NBC’s new political procedural The Enemy Within, is easily the best thing about a show that, after two episodes, seems a bit confused. In a sense, confusion is kind of the point; the show’s about a prolific bomb-happy Russian terrorist named Mikhail Tal and his seemingly infinite legion of undercover operatives who have assimilated themselves into American society. Erica herself states ominously that they sleep next to us; they’re everywhere, and they could be anyone. It’s all very worrying. But the confusion of The Enemy Within itself seems unintentional. It just doesn’t know if it wants to be a very serious and politically-charged drama or a chaotically-edited wham-bam network action thriller. And it doesn’t do either of those things particularly well.

The Enemy Within pilot attempts to wring tension out of Erica’s trustworthiness, which is undercut slightly by the show’s prominent marketing having already revealed that she betrayed her country to protect her daughter. However, her actions left four Americans dead, including the fiance of FBI Agent Will Keaton (Morris Chestnut), who is told he must work with Erica after his investigation into Tal’s latest retaliation against agents investigating his financial assets doesn’t yield any results.

Erica is the kind of character with a bunch of script-level advantages. She’s smarter than everyone, sneakier, more experienced, more dangerous. She has intimate knowledge of Tal’s operations and a sympathetic backstory and a cute daughter. But Carpenter is great here and sells the character better than the writing can. By The Enemy Within episode 2, “Black Bear”, we’re at the point where everyone still pretends not to want to work with her, but it remains abundantly clear that she’s the only person capable of getting anything done.

This is an obvious problem. There doesn’t seem to be an intriguing conundrum in the show that can’t be fixed by Erica having peeked at the script, and The Enemy Within is so determined to build drama around how other characters relate to her that they just seem hopelessly paranoid when they sideline her and stupidly naive when they don’t. The best thing about the show is also the worst. And the only chance of it being fixed is if The Enemy Within commits to something drastic. But when do network shows ever do that?

The potential is there. Tal’s double-agent Anna Cruz (Coral Peña) provides a ticking-clock continuity to episodes that have virtually infinite procedural potential; with apparently thousands of sneaky operatives on American soil, The Enemy Within can churn out hour-long plots for as long as it likes. But the show will only really coalesce into an engaging drama if it shows a willingness to subvert the genre playbook and have its characters do something truly interesting, which thus far it hasn’t