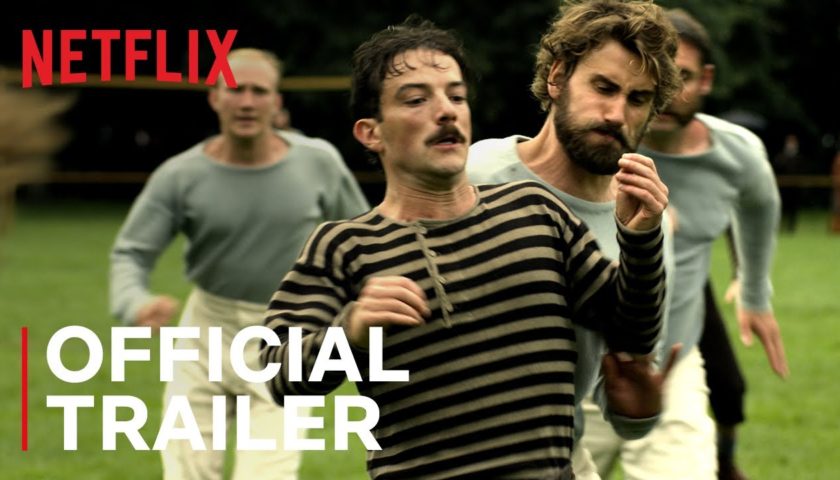 Football’s off the pitch right now, but there’s not much of it on the screen either in The English Game, in case viewers thought they would make a substitute with the latest series from Julian Fellowes (Downton Abbey) which kicks off with the quarter-finals of the 1879 FA Cup. Netflix dropped this 6×50-minute show just a few days after the ever-busy Fellowes debuted another period drama (Belgravia) on the UK’s terrestrial network ITV, but, essentially, it’s not quite match fit. A cast of young actors led by Edward Holcroft and Kevin Guthrie do their best to kick some life into the clichés, but The English Game is like a lumpy wet leather football that stubbornly refuses to lift.

As Downton Abbey grew ever-more successful, the scripts seemed to exponentially shrivel, culminating in a film with a plot so thin it would hardly have filled a Christmas special yet which grossed almost $200m worldwide last year. The English Game doesn’t have anywhere near the lavish budget of Fellowes’ most successful outing at any point in its career, and the plotting is just as blunt. The invention of football is an interesting possibility – how it moved from the elite English public (private) schools where it was invented into becoming a the world’s most popular sport – but this series sticks with the upstairs/downstairs formula that Fellowes has patented, this time pitting the public school-educated establishment against the impoverished mill workers of a Northern Lancashire town.

Produced by 42 with Fellowes as Executive Producer, The English Game will probably be best remembered for its appealing young cast, supported by Anthony Andrews in a small role and Kate Dickie in two tiny scenes (she is obliged to tell Guthrie “you’ve got a gift in those boots” while keeping a straight face, which she largely pulls off.) Holcroft makes for a watchable lead as the show’s top toffy, Arthur Kinnaird, banking heir and veteran of three FA Cup Finals with his team, The Old Etonians. Meanwhile in the mills of Darwen, factory owner James Walsh (Craig Paterson, who played Dot in Line Of Duty) has imported two Scottish players, Fergus Sutter (Guthrie) and Jimmy Love (James Harkness) to bolster his team Darwen United’s chances as the first working class footballers to compete in the quarter finals of the ‘gentlemen’s game’.

It’s an amateur sport, but Walsh is secretly paying his players. And the Old Etonians, who snottily scorn the northerners while passing the port (how Granny and her tart one-liners are missed from these lengthy London dinner party sequences), aren’t averse to bending a few rules themselves. Dialogue runs to: “Let’s knock these posh bastards off their perch!”, and, “These people don’t work for my mill – they ARE my mill!” from Team Lancashire. Over on Team Toff, one character declaims: “It took many educated men more than a decade of squabbling to determine the rules of football and yet it is far less complicated than the female mind.”

Put that in your boot and smoke it, footie fans!

It’s not a match of two halves, as Fellowes only half-heartedly returns to the game in later episodes. After the opener, with the two teams in their amusing period clothing and a miraculous half-time change of strategy which prompts a change in Darwen’s destiny, the sport is relegated to the sidelines. By the second instalment of The English Game, the show has gone full soap with Arthur and his wife (Charlotte Hope) losing their baby, which somehow results in him travelling up North and becoming caught in the middle of a millworkers’ union riot before having to stand up in a courtroom and make a speech in defence of one of the simple cap-doffers on the factory floor. As Sutter, Guthrie gets equal screen time: an offer from another team, an alcoholic father, and a love interest who has an illegitimate child. Anyone whose most recent screen vision of northern mill towns of that period came via Mike Leigh’s Peterloo will be suitably bewildered.

The remaining episodes advance slowly towards the Etonians having to surrender their sport, but this series isn’t so much about The Beautiful Game, The English Game, or any game apart from how fast Fellowes can pile ‘em high and sell ’em wide.

The series is credited to Fellowes and co-writers Tony Charles and Oliver Cotton.