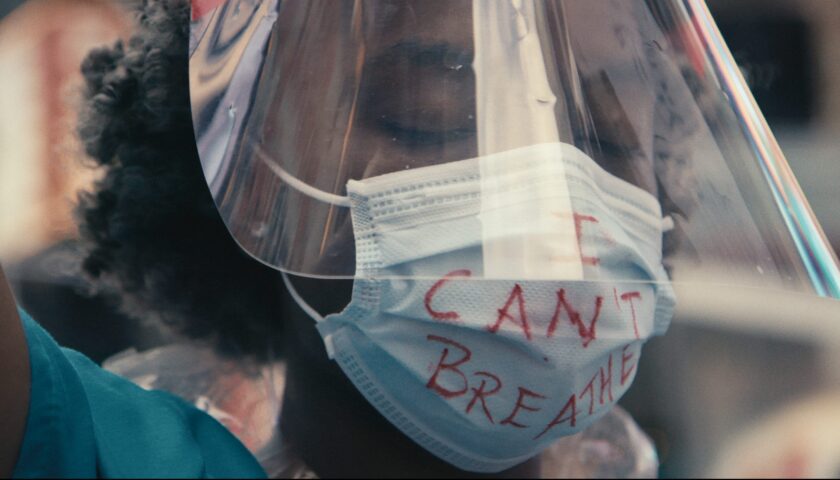 With his breathless, soul-piercing “The First Wave,” director Matthew Heineman makes a tough cinematic proposition. He asks his audience to travel back to March 2020 and relive the early, frightening days of the COVID-19 crisis in New York City, when the Big Apple quickly became the world’s coronavirus epicenter through four deadly months.

More graphic in its approach than two similarly themed nonfiction films — Nanfu Wang’s “In the Same Breath” and Hao Wu and Weixi Chen’s “76 Days” — Heineman’s documentary is indeed a hard one to consent to at first, considering that the globally ruinous pandemic is far from over. But even when the high-adrenaline “The First Wave” gets a touch too explicit for its own good with shots of morgue truck interiors, glimpses at newly sealed body bags and close-ups of eyelids flickering on the verge of lifelessness, it is also a necessary and undeniably moving one to experience and reflect on.

In its most graceful moments, Heineman’s character-driven, vérité-style film — which follows the day-to-day of a group of doctors, nurses and patients at the Queens-based Long Island Jewish Medical Center between March and June 2020 with inconceivable access — shares the unifying spirit of that meaningful act, following in the footsteps of the filmmaker’s “Cartel Land” and “City of Ghosts” as a searing and humanistic on-the-ground look inside an unfolding crisis. Indeed, “The First Wave” chiefly honors the country’s frontline staff by laying bare what they braved in hospitals flooded with patients carrying an unknown, dangerous disease. (Spoiler: It is significantly worse than one could ever imagine.)

In that regard, Heineman’s courageous and astonishing cinematic time capsule (which decisively never mentions Trump) is a salute to that heroism, so specific in its distressing visuals that you can only watch it on this side of the pandemic when some semblance of normalcy has been restored thanks to the widely accessible vaccines. Audiences will be moved to tears often during it, and sometimes triggered to anger, knowing how vaccine refusal continues to burden the country’s healthcare workers who deserve a break at long last. They will also walk away with a sharpened set of tools to connect the dots between May 2020’s Black Lives Matter protests that erupted in the wake of George Floyd’s murder and the notion of racism as an urgent public health crisis.

Among the key figures Heineman follows is Dr. Nathalie Dougé, a selfless physician who observes the unjust proportions in which the communities of color are affected by the virus first hand. Also serving as an editor and cinematographer here, Heineman portrays Dr. Dougé with utmost poignancy, charting her journey as a dedicated healthcare provider and later, a committed activist frequenting the BLM protests as a citizen fed up with a racist system’s utter disrespect of the human lives she tirelessly works to save. She is mainly joined by nurse Kellie Wunsch — a rapid response team volunteer often present in unspeakably tragic moments — and physical therapist Karl Arabian, tasked to assist patients in their recovery.

Heineman’s intimate camera sees this trio and other staff share intense moments of loss, frustration and heartbreak amid a constantly changing set of fears and unknowns. Those instances are interlaced by flashes of immense dignity as they treat, comfort and even caress their lonely patients, going from breaking unimaginably bad news to shrieking family members one minute, to attending Zoom birthdays and playing the disarmingly hopeful “Here Comes the Sun” in the hospital’s COVID wing every time a patient successfully goes off the ventilator.

Naturally, the patients also contribute to the narrative’s emotional core about a resilient New York City. One is Ahmed Ellis, an NYPD school safety officer in his mid-thirties. Married to Alexis Ellis (also an essential worker in the healthcare system), he contracts a severe case of the virus in the early days of the pandemic, while his resolute wife continues to be on the frontlines as a caregiver, both citywide and at home to their two young kids. A second patient is Brussels Jabon, an immigrant and a pregnant nurse who receives an emergency C-section prior to going on a ventilator. Sometimes sentimentally heavy-handed but mostly respectful, Heineman follows their painstaking battle on the road to recovery with care, a sense of passion and even humor when appropriate, smartly underscoring his subjects’ intersectional identities as people of color in law enforcement and healthcare fields.

At times, it is impossible not to ponder whether “The First Wave” is a little too much too soon, especially given Heineman’s occasionally sensationalist aesthetics felt in a heart-pumping score and spots of footage that come dangerously close to a Hollywood thriller. It is understandable to be bothered by it, and to question the omission of Dr. Anthony Fauci from a film that gives plenty of room to the disgraced former New York Governor Andrew Cuomo (who, at the time, admittedly provided much-needed local leadership to a suffering city and state). But what’s undeniable is the immeasurable journalistic value and importance of “The First Wave.” It’s both a vital piece of historical record that bravely captures the unseen horrors of the pandemic and a generous celebration of human dignity whose existence feels miraculous.