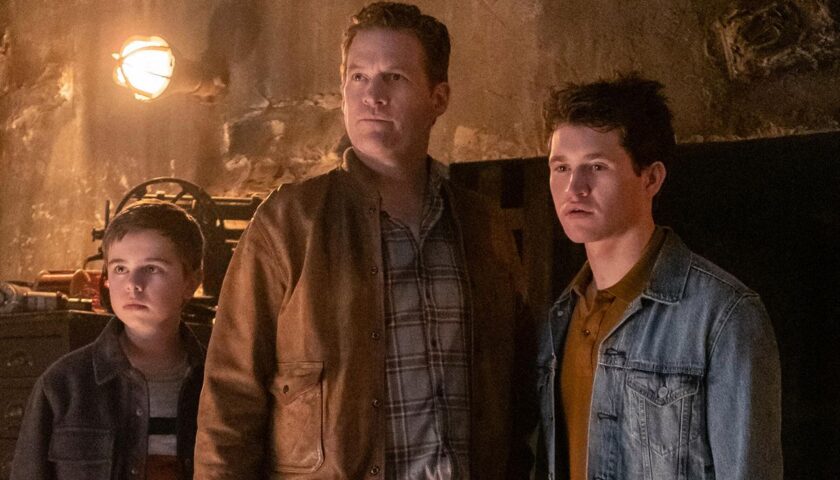 Every handful of years, Nancy Drew and The Hardy Boys get their stories revamped for the screen. Last year, it was Nancy’s turn. She set out to solve a ghostly murder in a soapy Riverdale-style CW series that ended up with mixed reviews. This year, it was The Hardy Boys’ shot at a comeback. The brothers got a Hulu reboot in which they attempt to sleuth out the secrets that led to their mother’s murder in the mysterious fictional town of Bridgeport.

Unlike the CW’s Nancy Drew, the new Hardy Boys is not an edgy, melodramatic teen series. It aims to be a more wholesome, curious small-town drama for a general audience and not just young adults. Does this work? Well, kind of. The Hardy Boys has a fun, classic mystery feel, but it also has a tendency to feel tedious.

Right away, The Hardy Boys introduces us to Frank (Rohan Campbell), an athletic 16-year-old who thoughtfully looks after those around him; Joe (Alexander Elliot), his snarky 12-year-old brother with the handy ability to pick a lock; and Laura (Janet Porter), their warm-hearted mother, who is murdered within the first 15 minutes after getting mixed up in a dangerous journalistic investigation.

Laura’s untimely death has the boys’ dad, Detective Fenton Hardy (James Tupper), setting out on a secret mission to figure out what happened to his wife. Meanwhile, Frank and Joe move to their parents’ hometown of Bridgeport, where they are to stay with their Aunt Trudy (Bea Santos) for the summer while they await their father’s return. Rather than just sitting on the sidelines, the boys seek answers with the help of the new friends they make in the seemingly sleepy town.

The best feature of The Hardy Boys is its old-timey sleuthing aesthetic. Though the series never specifies what decade it takes place in, there are strong ’80s vibes. The diner is the hot hangout in Bridgeport, everyone drives vintage cars, and there are no smartphones. The choice not to modernize the series fits the small-town-full-of-secrets narrative and gives it a sense of style. Plus, the plot makes full use of its setting.

The boys uncover clues all over the place — at the high school, the library, the carnival, the movie theater, the police station, the beach, the underground tunnels, and so forth. This keeps the scope of the mystery feeling big. While they’re running out and about, vibey tunes like ’80s bops “99 Red Balloons” and “I Want Candy” boost the mood. It’s all very fun. But while the story world is large, intriguing, and super retro, the characters and plots working inside of it feel second rate.

If you want to enjoy The Hardy Boys, you have to go in knowing that although it features plenty of twists and turns, it’s not smartly plotted out like Knives Out. Characters who refuse to give out clues one moment change their minds later with little convincing. Others happen upon convenient answers to puzzles. (For example, Officer Hooper [Jennifer Hsiung] figures out the sheriff had been lying about his whereabouts by finding brick dust on his tires). Even Frank and Joe make some decisions about whom to trust and what to do that are illogical and seem simply for the purpose of upping the tension. Many things that happen are crazy convenient.

There’s an even bigger flaw of the show, though: Many of its characters are just not particularly compelling, with clunky dialogue and loose development. There were a few I liked — for instance, the boys’ grandmother, Gloria Estabrook (Linda Thorson), whose persona blends together elegance and power. I was also entertained by the sarcastic charm of the youngest Hardy brother, Joe. But others, like con-man J.B. Cox (Atticus Mitchell) — a supposedly a good thief who really just lucks out a lot — are hard to get behind. Then there’s Callie (Keana Lyn), who gets twisted into a catty subplot with the new girl at school and blames her jealousy of the incoming student on the newcomer’s apparent suspiciousness. Their ongoing teenage tiff feels kind of dated and makes Callie come off as unlikeable, even though I doubt the writers intended this.

Perhaps cutting down the number or length of the episodes would have also helped. There are 13 episodes, all of which are over 40 minutes long. The mystery really didn’t need that much time to be solved. Tightening up the series would have made it less monotonous, especially because the middle dragged at times.

The Hardy Boys has a lot of strong elements that it never makes full use of it. But if you can suspend your disbelief and don’t mind the slow pace, you might be able to enjoy its cinematic B-level mystery. Just don’t expect it to be anything more than extremely fine.