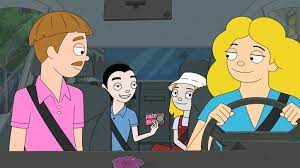 It takes a few episodes for the Harpers of The Harper House to get used to the Harper House. The Paramount+ animated comedy centers on a formerly “moderately wealthy” family forced to move into a decrepit home on the poor side of town after go-getter mom Debbie (Rhea Seehorn) loses her engineering job. Needless to say, it’s an adjustment for the family, who are unused to going without luxuries like country club memberships and eager to return to their old lives as soon as humanly possible.

But the series itself takes a while to get comfortable in its own skin as well, with episodes that waffle between random humor, feel-good earnestness and light satire without going quite far enough with any of them. Eventually, it settles into a quirky-sweet groove in the vein of Schitt’s Creek or Bob’s Burgers — though it’s not quite able, at least in the five half-hour episodes given to critics for review, to distinguish itself among that pack.

Creator Brad Neely crafts the Harpers’ world in bright colors and clean lines, which are complemented by Mark Mothersbaugh’s bouncy score. It’s an inviting place, even if the actual Harper House is designed to look, as one character puts it, like an Addams Family set — complete with not one but two shriveled corpses, as the family discover, to their horror, in the first episode.

At the head of the family is Debbie, the kind of relentless and upbeat entrepreneurial spirit who’s sure she just needs one “Shark Tank-level idea” to get her family back to what a sign baldly describes as “The Richer, Better South Side of River Creek.” In contrast to Seehorn’s other current TV role, Better Call Saul‘s buttoned-up Kim Wexler, Debbie wears her every emotion on her sleeve. But Seehorn brings to Debbie a similar bluntness that makes her impossible to dismiss, while allowing herself to go bigger and broader with Debbie’s kooky hot-mess tendencies.

Debbie has the loving support of her stay-at-home husband, Freddie (Jason Lee); perpetually clad in a pink polo shirt and an awkward bowl cut, he’s such an affable pushover that he does his children’s chores for them. Those kids are Todd (Ryan Flynn) and Ollie (chameleon Tatiana Maslany, sounding completely unrecognizable here) — twins, best friends and polar opposites. Todd’s supercilious and sensitive, aptly described by one classmate as a “junior Professor Snape,” whereas Ollie is so unflappably upbeat that one of her teachers asks if she’s on drugs.

The kids attend Redline Elementary, which isn’t the show’s first or last jab at the contrast between the Harpers’ old, wealthy white neighborhood and their new lower-middle-class, racially diverse one. Freddie, in particular, is written as a white guy who wants so desperately to befriend his “cool” (read: Black) neighbor Gbenge (Gary Anthony Williams) that Gbenge has to tell Freddie to stop treating him as a token. Acknowledging an issue isn’t the same thing as avoiding or solving it, however. At least in its first handful of episodes, The Harper House doesn’t have much to contribute to conversations around race and class beyond recognizing that they exist.

At worst, these awkward attempts at social commentary detract from the show’s true strengths, which are its gentleness and silliness. While too many of The Harper House‘s gags feel a draft or two away from their most interesting selves, each episode contains at least a couple of unexpected laughs. One of my favorites is the storefront sign of Debbie’s dad’s awnings store, which is called A New Day Is Awning and features a drawing of a sun looking utterly forlorn at being blocked out.

The storylines, too, become more entertaining the further they lean into escalating absurdity — as in an episode three plot wherein Freddie sets his sights on a pair of sweatpants he wants to gift Debbie for her birthday, setting in motion an elaborate plan that involves disguises, false identities, and possibly the dissolution of someone else’s relationship. Meanwhile, Debbie’s unrelated misadventures with an illegal food truck end in a Thelma & Louise reference. It’s the best installment of the bunch. That it all ends in a moment that’s equal parts touching and disgusting seems to be Harper House at its most fully realized.

For the moment, though, Harper House is more potential than payoff. In fairness, the buy-in is pretty low to begin with, as there are worse ways to spend half an hour than trying out a breezy adult-ish comedy. The series shows enough sparks of life to suggest it could yet develop into a sharper, more distinctive show as it fleshes out its peripheral characters and starts layering its jokes on top of one another; on the other hand, it’s a bit too bland right now to stand out as appointment viewing from a crowded streaming menu. Pop in for a visit, if you’re curious. But be warned that it may take the Harpers some time yet to make their house a home.