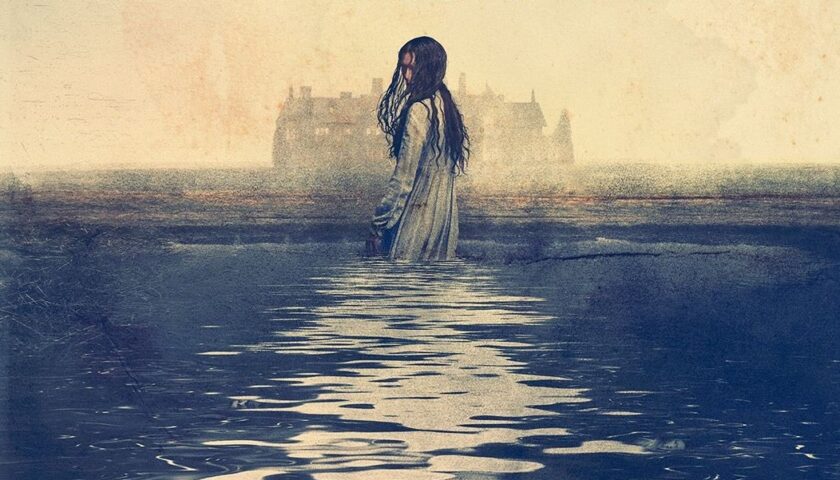 Those who venture into Hill House tend to never leave. That goes for the audience too.

Netflix’s The Haunting of Hill House was more than a series; it became an obsession. Viewers watched and rewatched the 2018 show to catch the hidden-in-plain-sight scares embedded in the background and decode the chronology-warped fate of the Crain family.

Showrunner Mike Flanagan, the director of Doctor Sleep, Gerald’s Game, and Hush, may be one of the few to actually break free of the place. Rather than follow-up with another season in Shirley Jackson’s disturbed structure, he has left it behind for another spiritually unsettled home from classic literature.

Vanity Fair presents the exclusive first look at The Haunting of Bly Manor, which will debut on the streaming service this fall.

It’s based on the the 1898 novella The Turn of the Screw by Henry James, about a young woman who moves to the English countryside to care for two orphaned children, encountering evidence of a grim history and entities she can’t begin to explain. While Hill House was the story of family struggle and trauma, Bly Manor is about broken hearts that never heal and tragic star-crossed romance.

“It certainly provides a new way to tell a love story, and there are three of them that really beat at the heart of this season,” Flanagan said. “They all have a very dark edge to them. And by the end, it’s really hard to differentiate tragedy with romance. That sense of romantic longing for someone who meant so much to us—but who’s gone—really is the heart of any ghost story.”

As with Hill House, Flanagan and producing partner Trevor Macy worked together to update the setting and expand and adapt the original text. They also wove in aspects of other supernatural stories by James, including “The Jolly Corner,” about a menacing doppelgänger, and “The Romance of Certain Old Clothes,” about two sisters and a mysterious chest of beloved dresses.

“The process is the same, in that it’s a literary remix,” Macy said. “You want to update the story, you want to find whatever fertile ground for elevating the character that you can in the source material, but we obviously took some liberties in updating it with a more modern setting.”

Some of the cast of Hill House has returned, but they’re each playing different parts this time. Bly Manor takes place mostly in 1987, starring Victoria Pedretti, the doomed sister Nell of Hill House, now playing the sunny American tutor Dani Clayton, who hopes to escape her own painful past by taking a job at the stately mansion looking after the Wingrave children—volatile Miles (Benjamin Evan Ainsworth, 11) and cheerful Flora (Amelie Bea Smith, 9).

“Victoria and I talked at the very beginning about how to differentiate this character from Nell. Nell was a character that carried around a ton of darkness with her and never quite got out of the shadows that she was introduced in when we see her as a child,” Flanagan said. “Between the setting in the ’80s, and this idea of a young American abroad, just out on an adventure, it brightened everything up to begin with.”

That’s just the veneer, of course. A creeping shadow gradually spreads over Bly Manor and its inhabitants.

“At its foundation, the Haunting series is very much about haunted spaces and haunted people. The way we make those things dance together is really going to be what’s uniform about Hill House and Bly,” Flanagan said. “Outside of that though, it was really important for all of us not to play the same notes we played for the first season. The first season is very much entrenched in family dynamics and death and grief and loss and child trauma. We all collectively felt like we’d said everything we wanted to say about that.”

One popular element of Hill House will remain the same despite the other changes this season—the layering of stoic, silent spectral figures in the margins of the show. “The hidden ghosts in the first season turned out to be one of my favorite things to play with on set,” Flanagan said. “The audience seemed to really like them. I loved watching people double back and try to find more of them. It encourages repeat viewing.”

Many of the background ghosts of Hill House were abstractions. They remained unnamed, inexplicable terrors. “We were just trying to hide faces and figures,” Flanagan said. In Bly Manor, though, these ghosts are puzzles to be solved. “This season we wanted our hidden elements to tell their own story. And very much unlike the first season, they’re actually going to be explained. By the end of the season, you’re going to know who they are and why they’re there,” he said.

The actual structures of Hill House and Bly Manor are also starkly different. “Hill House is described by Shirley Jackson as having this gothic, frightening, shadowy presence. Henry James’s Bly Manor, conversely, is described as being bright and sunny and welcoming and rather beautiful. And when the governess approaches it for the first time in the book, she isn’t afraid,” Flanagan said.

The manager of Bly Manor, Hannah Grose (played by T’Nia Miller), even describes it as “a great, good place” when she gives Dani her first tour. It’s a line taken directly from the title of another James story. “I loved that idea that it didn’t present with any threat, that it would just be this more welcoming, more beautiful aesthetic, so that you don’t walk in and say, ‘This is a haunted house,’” Flanagan said.

Steady, dependable Mrs. Grose may be in denial about what goes on there. She’s another character lifted directly from James’s novel—one who knows just enough to realize that she doesn’t necessarily want to know more.

Like the ghosts, the living characters are also riddles of a sort. Bly Manor wears a mask, as do those who call it home. Almost all the characters have secrets they grapple with or think no one will understand. “It’s the idea that the world that we’re presented with has all of the answers, but it has hidden meanings and has clues that would help us understand it differently, if we were able to see them,” Flanagan said.

Among the Hill House veterans returning for Bly Manor include Henry Thomas, who played the father in the first season. He costars this time around as Henry Wingrave, the wealthy uncle of the two orphaned children. He wants little to do with the estate or the son and daughter of his late brother and sister-in-law, but is content to support them from afar, so long as he doesn’t have to visit the manor himself.

Kate Siegel, who was the psychic sister Theo in the first season, appears this time in a role that is still secret. Oliver Jackson-Cohen, who was the addicted little brother in Hill House, is a more ominous character now—Peter Quint, a calculating business associate of the uncle’s who tends to take whatever he wants from Bly Manor, regardless of permission. He’s another character lifted directly from The Turn of the Screw.

“Much is made about him in the book about being a very toxic person, and particularly toxic within relationships,” Flanagan said. “One of the things that was exciting for Ollie this year, having played this very broken and vulnerable in season one, was to come in and play a villain, but trying to find a way to play a villain that wasn’t so simple. That was just something else we tried very hard to say: People are good and bad, all of us. Sometimes the dials are turned a little too far, or a lot too far, in one direction or the other.”

Among those who fall under Bly Manor’s spell are the children’s previous governess, Rebecca Jessel (played by Tahirah Sharif) another innocent caught up in forces she doesn’t fully grasp. The Innocents was actually the title of Flanagan’s favorite previous adaptation of The Turn of the Screw, a 1961 film directed by Jack Clayton (whose name inspired Dani’s) and starring Deborah Kerr as the governess who fears she is going mad. “The Innocents is such a huge, huge influence on this season in so many different ways,” he said.

“One thing you can say about Miss Jessel is, with some people an abundance of empathy can lead them down a wrong path,” Macy said.

Other newcomers to The Haunting series this time include Amelia Eve as groundskeeper Jamie, a self-confident skeptic, and Rahul Kohli as the resident chef Owen, who are both unaware and often strangely untouched by the undercurrents at work in Bly.

Young Flora maintains a vast collection of dolls in the story, many of them handmade. They are one key to the understanding what’s happening on the grounds where she lives.

“Dolls, for children, are a way to play with representations of real people,” Flanagan said. “I think for kids, it’s about control. Kids have such little agency. Dolls provide that. But there’s also a darker side to it. Ownership, claiming someone, ceasing to look at them as a human, and instead, looking at them as an object, as a doll…we can draw lines to all sorts of toxic romantic relationships that way, and get into gender politics and the objectification of women in particular by this genre.”

“There’s very little difference ultimately, in the way Flora is with some of her dolls and how Peter Quint interacts with Miss Jessel at the beginning of their new relationship,” Flanagan added. “There are major themes throughout the whole season on the difference between love and ownership, of the nature and importance of consent. And possession, which is all over Henry James’s original material.”

Of course, there’s also the pile of decrepit, discarded dolls in the basement of the house, which extends the metaphor further. What becomes of people in controlling relationships when they are finally abandoned? Do those who have committed to a mask for so long ultimately see their real identity fading away?

“The more attention a viewer focuses on Flora’s dollhouse,” Flanagan said, “the more they’re likely to see what’s happening and why.”