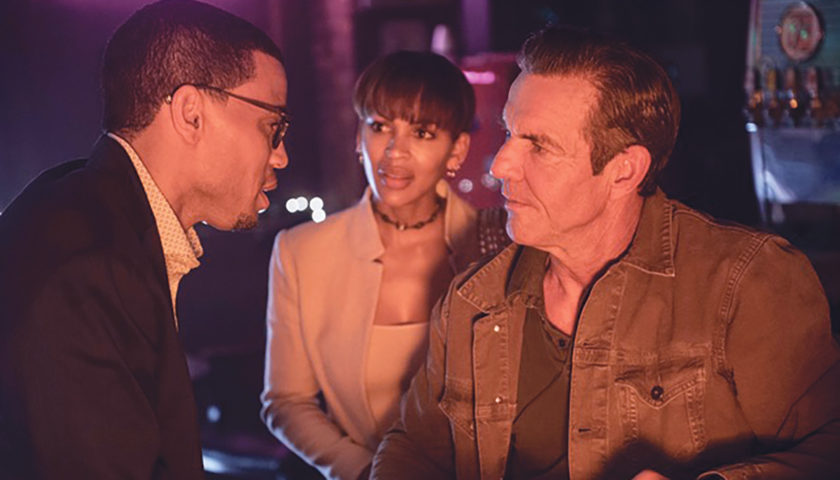 Review: A contrived and cliché-stuffed thriller such as “The Intruder” often forces me to suppress an urgent desire to shout rude things at the screen. So I must confess that I had a great time watching this very bad movie as a member of a very vocal preview audience that had been given carte blanche to provide full-throated running commentary.

The PR wizards had alerted the invitees: “For this screening, we are encouraging the audience to ‘watch out loud.’ Feel free to vocalize your reactions as loudly as you want while you watch!” No, really. Judging from how frequently folks seated nearby offered scornful groans, snarky observations and insulting appraisals of the characters’ intelligence, this was pretty much exactly the right place at precisely the right time to derive maximum enjoyment from this particular communal experience.

Directed by Deon Taylor (“Traffik”), written by David Loughery (“Lakeview Terrace”), and filled to the brim with situations and confrontations recycled from dozens of other, much better films, “The Intruder” pivots on the travails endured by an attractive African American couple after they purchase an expensive, spacious — and yes, you guessed it, secluded — dwelling in the Napa Valley.

Mind you, Scott (Michael Ealy) and Annie (Meagan Good) don’t have to worry about termites or bad plumbing or even inconsistent Wi-Fi as they turn the ivy-covered, century-old house into a home of their own. Their problem — immediately evident to everyone else on screen except Annie — is the house’s previous owner, Charlie (Dennis Quaid), an aggressively engaging fellow who, despite his initial eagerness to sell, doesn’t seem quite ready to let go of the house and the grounds around it.

Although he plans to move to Florida and live near his daughter — or so he says — Charlie keeps showing up unannounced at the couple’s front door, proffering food, wine and/or advice, or taking it upon himself to tackle chores like mowing the lawn or mounting Christmas decorations. Scott’s uneasiness gives way to annoyance, and then to ultimatums, as Charlie continues to make visits that, more often than not, are timed to occur while Scott is off at work in San Francisco. But Annie repeatedly dismisses her husband’s suspicions as unfounded, and at one point actually invites Charlie inside to share pizza while Scott is elsewhere. It takes quite a while for her to finally make the connection between Mr. Nice Guy and the strange sounds she hears throughout the house late at night.

At times, “The Intruder” plays like a muffled echo of “Cold Creek Manor,” a 2003 thriller in which Quaid was the protagonist dealing with his home’s too-helpful previous owner (Stephen Dorff). This time, Quaid is the one who gets to gradually amp up the craziness, and he appears to take ever-increasing delight in feasting upon the scenery as Charlie edges near, then swan-dives into, the deep end. Unfortunately, there’s nothing mysterious or unexpected to his performance, just a gradual escalation of nervous tics, territorial obsessions and, ultimately, unhinged fury.

Indeed, “The Intruder” offers few surprises of any sort. Joseph Sikora periodically pops up as Mike, Scott’s uninhibited workplace colleague, the type of character who, in a movie like this, seldom makes it to the final reel. In this case, Mike comes off so obviously as meat for the grinder right from the start, you may grow impatient waiting for his fate to be sealed. On the other hand, if you see this movie with the right kind of audience, you may be amused by the cheering that erupts when the hammer, or something equally lethal, finally does come down.