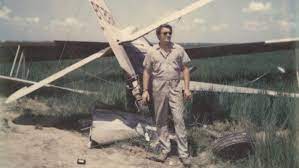 Lott and Mark utilize interview footage from Craig Hodges, a childhood friend of Gary’s son Travis; in that footage we see Sally, Travis and Travis’ sister Sarah Lee over the span of 15 years give their stories about Betzner as a father and his suicide from the perspectives of different ages. Also interviewed is Betzner’s first wife Claudia and their daughter Polly, who was born shortly before Betzner left his first wife for Sally.

The first episode details Betzner’s complex life, and his very liberal-for-Arkansas politics, especially when it came to drugs. His history with his kids — he was “Disneyland dad” to Polly, who only saw him occasionally because they lived in different states — and life with Sally also are examined.

Then we get a surprise, but not really if you know the case: Betzner sits in a chair to talk. Yes, he’s still alive; he faked his suicide in 1977. He and Sally went so far as to teach themselves self-hypnosis in order to make Sally actually believe that Gary had killed himself.

Why did he fake his death? Because of what he was doing aside from dusting crops: He was running drugs, especially after he traveled to Miami in search of cocaine. He had a serious case of gout and he heard that coke would help. He got arrested by the DEA during a sting in the Florida city, then got nailed for possession in Arkansas while he was awaiting trial for the federal case. Facing decades in prison, he decided to run, get a new identity, and call for Sally and their kids to join him later. But after he left the scene of his “suicide”, the bizarre stuff was just getting started.

Lott and Mark had a lot of info about Gary Betzner that they had to piece together into a compelling narrative, not the least of which which is the interview footage Hodges did with Betzner and his family over the past decade or so. But some of their choices when it came to telling the story in The Invisible Pilot made the first episode feel more disjointed and hard to engage with than they likely intended.

The first episode, which is mainly biography, takes too long to get to the point that Betzner was leading a double life, with his wife Sally completely a part of that. There’s info on his marriages and on how he got Sally to smoke pot for the first time, but we don’t hear much about his involvement in drug smuggling until we’re introduced to Matzner himself, more than halfway through the episode.

Waiting to introduce Matzner, and talking about his case like he was really dead, gave us in the audience a nice surprise, but it hurt the storytelling because now we had to hear about the day of his “suicide” from his perspective, after getting the perspective from Sally, Travis and Sarah Lee. It became a bit repetitive, and at that point we just wanted to hear about how Betzner got into the drug game.

Another device that was distracting was splicing together the interviews of Betzner and his family from Hodges’ footage over the span of a decade or more. Besides seeing everyone involve age, the clips don’t give the audience much insight into how the family’s viewpoint about Betzner’s life changed over time. Travis is the only one who seems to transform, going from a guy in his 30s who certainly seems damaged by his childhood but has dealt with it to a man pushing 50 who has let his inner demons get to him.

We suspect that the second and third episodes will be a bit better paced as we dive into Betzner’s history after his “suicide”; after all, there’s 45 years we need to cover there, and it likely involves more smuggling and deals with the feds. But the first episode does the series a disservice by trying to stretch the story and by being too cute with the information the filmmakers have.