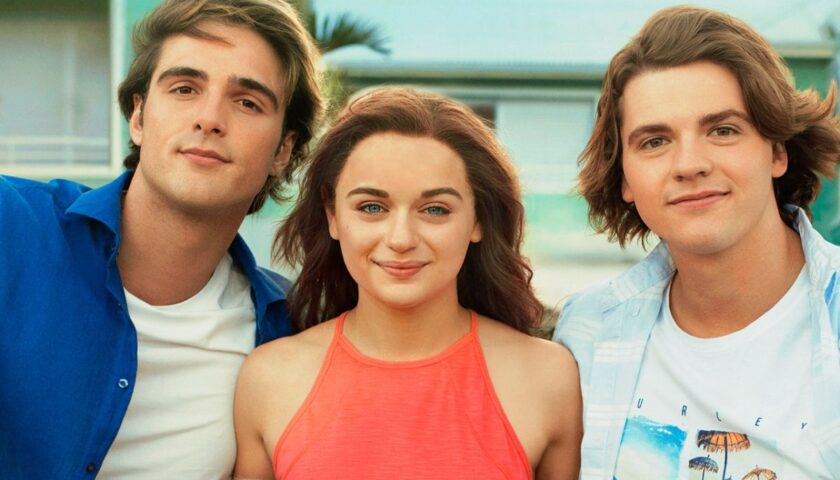 Netflix’s “The Kissing Booth” franchise began with sexist and retrograde attitudes toward its high school-age lead characters, then evolved into a collection of romantic tropes and tricks that give the genre a bad name. Now we are left with the final insult: Three films in, this series still doesn’t get its leading lady. In the face of icky writing, limp directing, awful pacing, horrific green screen, and terrible jokes, star Joey King spent three film adaptations of Beth Reeckles’ YA novels injecting heart and humor into her Elle Evans. Still, King’s charm isn’t enough to save the series, but it’s sure as hell the lone silver lining of a franchise that finally, blessedly, is coming to an end.

Where last summer’s “The Kissing Booth 2” improved upon the series’ ostensible comedic bent and allowed King to shine, the franchise’s conclusion doubles down on its worst elements. At least it’s over, but series filmmaker Vince Marcello won’t let it stop without another overstuffed, 113-minute entry, complete with a bizarre postscript meant to leave viewers feeling as if Elle finally got her happy ending, with a few caveats.

“The Kissing Booth 2” regurgitated the first film’s central trauma: How could Elle juggle her very different relationships with two very different brothers? (There also was also a subplot about a Dance Dance Revolution video game knock-off, her one hobby outside of dealing with the Flynn boys.) It ended on a cliffhanger, if you can call it that, and as we enter “The Kissing Booth” for the third time, there’s fresh hope: The final installment might finally be about Elle’s future — her real future, not the high-school strum und drang fueled by hurt feelings or party invites.

The final film’s fresh(ish) spin hinges on college: Will Elle opt to attend with reformed bad boy paramour Noah (Jacob Elordi) or her best pal/Noah’s younger brother Lee (Joel Courtney)? “The Kissing Booth 3” (shot back-to-back with its predecessor, both using South Africa as a stand-in for Southern California, with mixed results) finds more complications for Elle, but none of them show her becoming a fully formed person. In “The Kissing Booth” franchise, Elle’s entire identity is rooted in her relationships with Noah and Lee. Without them, she simply does not exist.

Set in the summer before Elle and Lee head off to college, “The Kissing Booth 3” mostly takes place in and around the Flynn family’s beach house. (Does a SoCal family with a beachside mansion need another? Yes, sure, if the film needs another setting.) Elle, Noah, Lee, and Lee’s girlfriend Rachel (Meganne Young) opt to spend the summer together. Turns out that the Flynns (including Molly Ringwald as the boys’ mom, reminding people of good high-school movies) are selling the beach house to make way for fresh development and the kids are none too happy about it — metaphor, hello.

Elle still can’t decide which college she wants to attend (Harvard with Noah? Berkeley with Lee? It’s tough!) and she’s too busy to engage with anyone meaningful in her life (Noah, Lee, her father, her brother, the list goes on and on) as she attempts to make her choice. There’s weird tension with Marco (Taylor Zakhar Perez), who’s still hung up on Elle after the second film, and the appearance of Noah’s good pal Chloe (Maisie Richardson-Sellers) doesn’t help. Lee picks up a new friend in the form of Ashton (Cameron Scott), whose puppy-dog charm threatens the pair’s BFF-ship until that drama is no longer necessary and Ashton is all but forgotten.

The group cycles through the same fights with startling, wearying regularity. At one point, there’s a large-scale go-kart race meant to resemble popular video game “Mario Kart” brought to wincing life, presumably to break up the monotony of it all. (Otherwise: what?) King continues to breathe life into Elle, even when she’s making ludicrous, immature decisions, while Elordi is reduced to looking mad and Courtney is saddled with some serious crying jags. Hormones! None of it feels real or vital, but when you’re a teenager, isn’t that how everything feels? Three films in, how can this franchise not at least get that right?

The franchise does make some unique choices on occasion, though they rarely pay off. While cheeky talk about sexual entanglements — and one oddly tame in-bed kissing scene — hint at a more grown-up series, that’s where it ends. The same can be said of multiple sequences in which the mostly under-21 Elle, Noah, Lee, and pals are pictured drinking copious alcoholic beverages; Elle and Noah even appear to go on a date in a tiki bar.

“The Kissing Booth” could deliver a more adult, honest look at teenage lives, but it prefers to pull way back into chaste, wholly immature territory. When maturity does assert itself, it’s in all the wrong places. (Many of its supporting stars appear to be a decade past high school graduation.) And, while it’s somewhat refreshing that the series never attempts to pull Elle and Lee into romantic territory, even that choice is weak in its execution; King and Courtney exhibit far more chemistry than King and Elordi.

Traditional studios ceded teen-skewing romantic comedies to Netflix years ago. For every franchise winner like “To All the Boys,” there’s something like “The Kissing Booth” — another beloved book series, a hip young cast, scenic locales — that wastes them with shoddy, unfocused filmmaking. Reekles was 15 when she published “The Kissing Booth” (it’s true!) — an actual teenager, finding her voice through the kind of heroine she wanted to see on the page. Those hopes for Elle were flattened by a franchise that never wanted to let its leading lady shine. Close this book, it’s (finally) done.