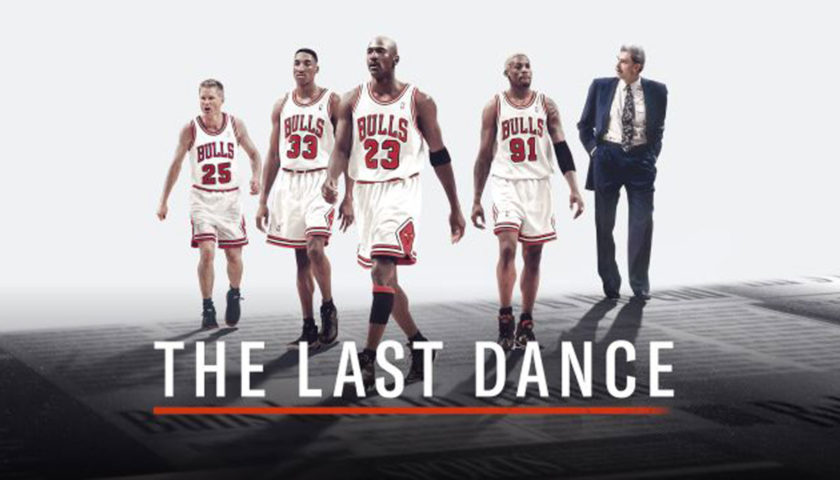 “The Last Dance” (2020 release; 10 episodes of about 50 min. each) is a documentary about Michael Jordan and the Bulls. As the documentary opens, we are at “the start of the 1997-98 NBA season” and the voice-over reminds us that “a dynasty is in doubt”. We then have a quick flashback as to the 5 previous titles, while Bulls owner Jerry Reinsdorf ponders “we need to rebuild”, but ultimately offers a one year deal to coach Phil Jackson for “one last dance”. Comments Bulls GM Jerry Krause to Jackson: “I don’t care if you win 82 games in a row, this is your last year as the Bulls head coach!” Wow… At this point we are 10-15 min. into Episode 1.

Couple of comments: this documentary series is directed by Jason Hehir, a veteran of ESPN’s excellent 30 For 30 sports documentaries. The amazing thing is that we are reminded in Episode 1 that the Bulls decided to grant basically unfettered access to a team of NBA film makers to document the Bulls’ entire 97-98 season. For reasons not explained in this documentary, this footage (consisting of hundreds of hours) has been sitting on a shelf somewhere for over 2 decades but now has finally been unearthed. In addition to this previously unseen archive footage, the documentary makers also interview the key people as they reflect on all this, now more than 20+ years later. There is Michael Jordan, Scottie Pippen, Dennis Rodman, Phil Jackson, Steve Kerr, etc. etc. While of course the emphasis is on Jordan, his teammates get plenty of screen time, for example Episode 2 opens with a lengthy segment on Pippen’s background and career trajectory (including the fact he signed a lengthy contract extension in 1991 that ended up severely underpaying him). Meanwhile, we get to see all of the glorious game footage of one of the very best teams in NBA history, and surely the NBA GOAT single player (sorry LeBron).

“The Last Dance” premiered last night on ESPN with the first 2 episodes, which are now available on demand on streaming services. New episodes air Sunday evenings at 9 pm Eastern. Ca’t wait for that! If you are a fan of the NBA or simply want to re-experience what it was like following the Bulls during their 90s glory years, I’d readily suggest you check this and and draw your own conclusion.