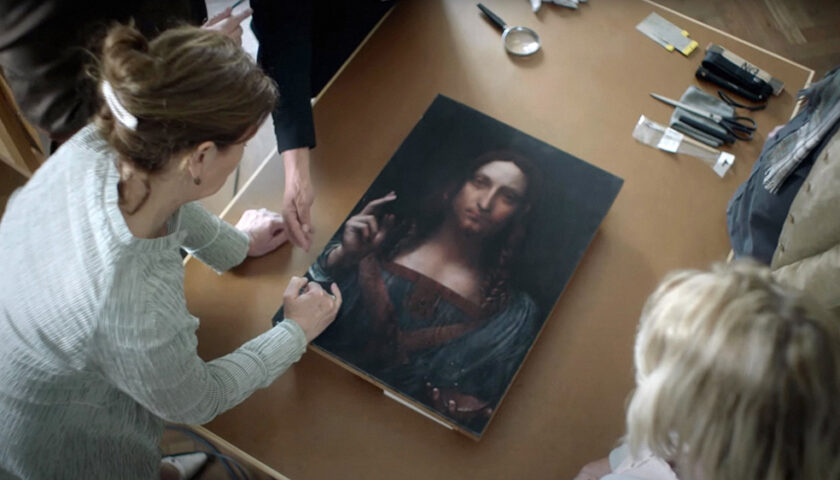 In 2005, an art scavenger named Alexander Parish bought a High Renaissance painting from a small New Orleans auction house for $1,175. In 2017, Christie’s sold a heavily restored version of that same painting — the provenance of which had since become the art world’s hottest controversy — to the crown prince of Saudi Arabia for a cool $450,300,000 (presumably outbidding Kenneth Branagh’s character from “Tenet”). Mohammad bin Salman’s record-shattering purchase consecrated the idea that “Salvator Mundi” is an original Da Vinci better than any historian ever could, but if the origins of this oil-on-walnut portrait weren’t so intensely disputed, perhaps no one would have spent as much to assert its value. If only Orson Welles were still alive to have a hearty chuckle over the whole thing.

So did it come from the master’s hand, or is it a “fake”? Spoiler alert: Andreas Koefoed’s “The Lost Leonardo” is the kind of fast-paced and casually absorbing investigative documentary that ends with a newscaster declaring: “The mystery is sort of solved, but not really.” But Koefoed himself is every bit as cagey and opportunistic as any of the other people whose eyes widened at the sight of the painting during its 12-year journey from Louisiana to the Louvre, and though his film slow-rolls the obvious for maximum suspense, it understands from the start that the real mystery behind “Salvator Mundi” isn’t about how art becomes commerce so much as it’s about how commerce becomes art.

Of course, that doesn’t stop “The Lost Leonardo” from getting hung up on the “is it or isn’t it?” of it all, especially as the documentary strives to recreate the commotion that “Salvator Mundi” seems to have caused with every step of its evolution from “overlooked antique” to “the single most expensive painting ever sold at public auction.”

Intrigue is the name of the game even when it gets in the way of a more nuanced story, as Koefoed drops us into this ongoing imbroglio with a glassy score that sounds lifted from a heist movie, and handsomely recreated footage of “sleeper hunter” Parish rummaging through some dark archive with a flashlight in his hand. He’s looking for diamonds in the rough; he finds what one of the film’s many talking heads describes as “the most improbable story ever heard in the art market.” Another says that finding an unknown Da Vinci would be like telling someone “I had a spaceship on my lawn last night, and there were some unicorns.”

The stakes are clear, as is the skepticism. Enter: The ever-colorful art critic Jerry Saltz, whose interview testimony is so big that Jeff Koons will probably try to install it on the roof of the Met. Not only does Saltz think the painting is a sham — maybe something created by one of Da Vinci’s disciples, and maybe not even that — he also thinks it’s a piece of crap. You can’t win ’em all, Leonardo. Others are more convinced of the painting’s value; many of whom would stand to gain from its veracity, and some of whom stake their reputations upon it.

Perhaps the most compelling of those people is widowed restorer Dianne Modestini, whose hands-on relationship with “Salvador Mundi” has convinced her that it’s the real deal, but whose overpaint work on the original picture is so dramatic and expertly done it leads some to argue that she deserves more credit for the piece in its current form than Da Vinci or anyone else. Koefoed’s unwillingness to probe into Modestini’s personal motivations, which seem ensnared with the memory of her late husband, is typical of a film that’s too busy ogling the varnish to chip away at the detail below. “In the old masters space,” someone says, “opinions matter more than facts.” And in the specialized theatrical documentary space, good stories matter more than opinions.

But hoo, boy is this a good story, and it only gets better when ultra-ballsy Swiss freeport magnate (again with the “Tenet”) Yves Bouvier enters the picture with a jaw-dropping plot to become the most profitable middle-man of all time. This is where Koefoed transitions the focus of his film away from the provenance of “Salvador Mundi” and instead toward the artwork’s ultimate value as a vessel for transferring enormous sums of money and cultural capital, a gear-shift that he executes with the invisible elegance of a close-up magician. At a certain point, the micro elements of this story — the knot of wood on the rear side of the painting, the placement of Jesus’ hand in the image, the evidence that the original artist adjusted a thumb — are subsumed by the macroeconomics that would attend any artwork capable of capturing the world’s attention.

It doesn’t matter if the painting moves Mohammed bin Salman, all that matters is where Mohammed bin Salman can move the painting. For all of its slickness and capitulation to modern documentary norms, “The Lost Leonardo” crystallizes how remarkable it is that something a random guy found in New Orleans could eventually become a smokescreen for a foreign despot’s crimes against humanity, a process that Koefoed portrays by keying into the way that personal relationships to the painting are stripped away in tandem with the painting’s relationship to history, itself.

If this arresting documentary is too agog at its own story to intricately reckon with how 21st century geopolitics and technology have further perverted the relationship between art and commerce — if it stops short of a post-credits scene where Samuel L. Jackson shows up to threaten us with the imminent rise of NFTs — the film nevertheless makes a strong case that some art is truly timeless. We may never know with 100 percent certainty who painted the Jesus depicted in “Salvator Mundi,” but they wound up perfectly capturing what people worship today.