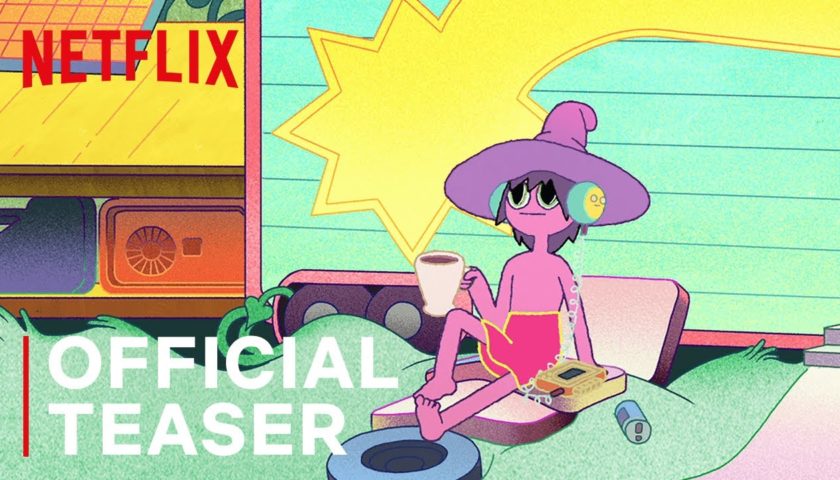 I’m seeing a lot of reviews that make inaccurate assumptions about the nature of this show. It’s not merely podcast-inspired, a large portion of the dialogue is actual interview clips taken from Duncan Trussell’s (Clancy) podcast “The Duncan Trussell Family Hour”. Pendleton Ward was a fan of the podcast and collaborated with Trussell to create this show. Because of this, the majority creative voice that comes through in the show is Trussell’s, so if you’re looking for more Adventure Time, you won’t necessarily find it here.

With that being said, I’m going to evaluate the show 1) as animation, 2) as entertainment, and 3) as education.

1) The animation in this is show fantastic. It’s psychedelic, colorful, and imaginative. There are tons of tiny details packed into the background to look for, and it makes use of different drawing styles and mediums in a really creative way. People have complained that the conversations that take place in the show don’t relate to the animation at all, but that’s just not true. The animation usually serves as metaphor for or exploration of the topic of the conversation; a lot of the time this is executed in really clever ways that become more clear as the episode progresses. A minor gripe is that the animation frame rate is noticeably low in places, but I think it is understandable considering how much more detailed this show is when compared with other animated shows.

2) This show has two main sources of value: the spectacle of the animation and the conversations that Clancy has over the course of the show. If you come to this show looking for the entertainment you would get from a traditional TV show, you’re bound to be disappointed, because there’s not much in the way of plot, character development, or narrative tension. However, that doesn’t mean there isn’t any at all, and the story that unfolds over the course of the show relates to the themes of the conversations Clancy is having (The best example of this is the episode “Annihilation of Joy”).

It’s hard to say whether Clancy himself has changed by the end of the final episode. I think that Clancy is supposed the represent the human condition, especially of someone living today. He seems to run away from everything in his life, retreating into his universe simulator and escaping by entering other’s lives (cough, Netflix, cough). He’s so desperate to do so he doesn’t pay attention to the beauty of the world around him, the suffering or needs of others, or even the obvious warnings coming from the simulator itself. He doesn’t pay attention to the present!

I think he also serves as a critique of the detached stoner that this show is marketed towards, because he seems to convey gaining genuine understanding and insight during his conversations, but then can’t seem to apply that to his own life. I will say that one weakness of the show is that it does seem like Clancy has things illustrated or explained to him that he should already understand, because the podcast conversations themselves are from various different times in Trussell’s life (For example, Clancy expresses interest in mindfulness in the first episode and then seems to be unaware of the concept of presence much later in the show).

My main problem with the show from an entertainment perspective is that I don’t think it succeeds in becoming something truly cohesive. If you go into it knowing it is derived from a podcast, you can easily distinguish the podcast dialogue from the new dialogue, and it can kind of take you out of the experience. If you go into the show knowing nothing about it, then it is bound to cause you confusion because the dialogue simply does feel disjointed from the show at times. I can sort of understand why others mistakenly thought the podcast and the animation were done completely separately, or that the podcast dialogue itself was scripted. Basically, I’m not sure that the show as a whole is always more entertaining than either just the animation, or just the conversation.

3) I’m pretty upset that this show was released on 04/20/20 for marketing purposes, and to be honest I wonder if it was Trussell and/or Ward’s decision at all. I watched the first episode while high and found it impossible to keep track of what was happening. Sure, the show has psychedelic animation that makes it amazing to look at while high, but the conversations that are being had are of a genuine and complex nature. It is difficult to pay attention to both and that is a weakness of the show. THERE ARE REAL INSIGHTS PRESENT IN THESE CONVERSATIONS that you can learn about and benefit from. One weakness of the show is that these conversations can seem very surface-level for someone who has already investigated these topics. However, I think part of the value that this show has is presenting conversations about these difficult subjects in a way that is appealing and accessible to people that haven’t looked into them or heard about them.

Some of the guests in the show are real philosophical, spiritual, and medical experts and the dialogue is not mere pseudo-intellectual stoner LSD babble as some others have characterized it. While psychedelic drugs are often abused as mere playthings, they can give people genuine insight. Some psychedelics have been scientifically proven to alleviate depression. There is also scientific evidence for the benefits of mindfulness meditation, a kind of meditation derived from Buddhism which is discussed in the show.

Please, watch this show sober with an open and non-judgmental mind, and research the guests and their backgrounds. No matter how druggy, unrealistic, stupid, depressing, or strange you think it is at first, I promise that there is meaning to the madness. You don’t have to agree with everything (I don’t), but I think it is disingenuous to dismiss the dialogue as shallow dribble, and it might be worth giving these ideas a second thought.

In sum, I think this show succeeds in experimenting with pairing incredible animation and meaningful podcast conversation. Has it pioneered the next big thing (long-form podcast animation) that will be imitated and iterated on in the future? I’m not sure, but it seems unlikely. It’s possible to watch this just for the animation and the humor, but I think the conversations have a lot to offer as well.